[Last in a series of 10 posts on representations of the telephone as instrument of fear, conduit of spirits, and messenger of madness. Parts 1-4 were adapted from posts published at the blog The Face at the Window in 2005-06; parts 5-10 appear here for the first time.]

… a feeling of having traveled to the end, the falling off.

Horror doesn’t exist without fear: though fear doesn’t necessarily imply horror as the cause, it is horror’s only logical result. Talking, thinking, reading, or writing about phone horror, as you and I have been doing for the last several weeks, are therefore not ways of exercising horrific power, but of experiencing the powerlessness of fear. Luxuriating masochistically in the violent interruption of the telephone’s ring — that suddenness that is never completely unexpected, that beckoning which, even if it turns out to be a wrong number, someone somewhere has directed at you, and you alone.

… what else could he do, once outside and alone, but describe a circle, the zero of his nothingness?

“Shut a Final Door” is not Capote’s subtlest story, but it is among his most lingering. Published in The Atlantic Monthly in 1947, winner of the O. Henry prize the following year, and collected the year after that in A Tree of Night and Other Stories, it instances what William L. Nance called Capote’s “dark fiction of fear, failure, and captivity.” We encounter a protagonist, one Walter Ranney, in the sweatbox of a side-street New Orleans hotel, in flight from the poisonous mess he has made of his life. Flashbacks show a string of increasingly cruel treacheries visited by Walter on his friends and lovers, unaccountable except as the systematic destruction of love by one who has always felt deprived of it.

Walter has fled Manhattan, first for Saratoga, New York, then for New Orleans, his only impulsion being to get away from himself. Yet here he is, sweating and vomiting, trapped in his skin and in his head, working over his recent life and nightmares. He’s far from home and anyone who knows him. Except that wherever he runs, the phone rings, and on the other end is a voice, and the voice says, “You know me, Walter. You’ve known me a long time.”

It diminishes any art to see it as merely a statement of the artist’s autobiography; “Shut a Final Door,” like anything alive, has independent existence. But part of its life is what it offers, as in a distorted mirror or clairvoyant projection, of its creator’s self-insight — his worst suspicion of what he is, his most fearful estimate of what he might become. Walter Ranney, like his creator a mere youth of twenty-something, an exquisitely deformed orchid of neurosis, is already the backstabber Capote in later life became, when he savaged his society friends in the few published chapters of the famously unwritten novel Answered Prayers, and gave interviews lambasting the taste, talent, moral character, and physical appearance of nearly every person who’d ever meant something to him. 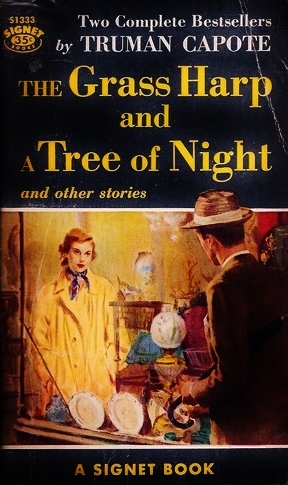 By the time he wrote “Shut a Final Door,” Capote had spent time in, successively, Manhattan, Saratoga (where he’d done a residency at Yaddo, the artists’ colony), and New Orleans — the very circuit followed by Ranney. And there’s an over-the-shoulder echo of Capote’s single piece of phone horror in this passage from a 1973 interview-dialogue with Andy Warhol:

Truman: … I do get some of the most … mmm … all-out weird letters that you’ve ever seen in your life. And phone calls and tapes.

Andy: But your number is really hard to get.

Truman: I keep changing it all the time. But if you’re in a hotel, suddenly the telephone rings and people are on the phone saying — well — the most incredible things that make you hardly want to walk down the street …

Let me again propose the formal recognition of an undeclared genre: the ghost story without ghosts. It was perhaps Capote whose work first alerted me to this shadow form, which exists like a secret subculture between, around, and beneath those works that know they are ghostly and proclaim it with clarity. In his early novellas and stories, up to and including Breakfast at Tiffany’s (1958), Capote is always sensitive to the spectral level of human interaction, the gauze of the mystical over a physical scene or moment’s perception. Charles McGrath has aptly described him as “a Gothic, fin-de-siècle kind of writer who would have fitted right in with Beardsley, Wilde and Ernest Dowson,” whose style is distinguished by “atmosphere and filigreed prose.” But he is a more exacting stylist than those Decadent forebears, and a more original observer — a hovering tracker of night lives and shadowy movements and marginal people, a writer whose prose emerges, precise and eerie, through trembling veils of terror.

“Shut a Final Door” is thus a rich and strange combination of the supernatural; post-war Freudism (in a nightmare, Walter sees, silent and inexplicable among the recognizable people of his life, a “no-faced creature”); and the slatted-light, blinking-neon despair of film noir. It is also attuned, in a near-Lynchian way, to the subliminal audio track of worlds within worlds, the clamor of voices in the head and on the street, and the action underlying surface life whose horror is in its hiddenness: “Water flushed down wall pipes, steps passed overhead, keys jangled in the hall, a news commentator rumbled somewhere beyond, next door a little girl said, why? Why? WHY?”

Yet the story’s emotional impact, as with previous examples of phone horror, issues from supernatural or psychic tension conjured within an emptiness that aches, a void that throbs — that dislocation of sound from image, voice from body, act from intent that once struck the fin-de-siècle as miraculous yet to us might suggest an unnatural, even horrifying disunion. The creature in Walter’s dream; the voice on the phone; the girl asking WHY: none has a face. None of the sounds raining on Walter Ranney in his sweltering room has a visible, an identifiable source; neither does his hunger for betrayal and ruin. He is himself a ghost, a faceless creature, a voice floating on wires, a child asking WHY. He is the zero at the center of a circle of nothingness; his is the fear on which horror feeds.

Just as the music ended, the telephone rang. He simply stood there, afraid somehow to answer, and the lamplight, the furniture, everything in the room went quite dead. When at last he thought it had stopped, it commenced again; louder, it seemed, and more insistent. He tripped over a footstool, picked up the receiver, dropped it and recovered it, said: “Yes?”

Long-distance: a call from some town in Pennsylvania, the name of which he didn’t catch. Following a series of spasmic rattlings, a voice, dry and sexless and altogether unlike any he’d ever heard before, came through: “Hello, Walter.”

No answer from the other end, only a sound of strong orderly breathing; the connection was so good it seemed as though whoever it was was standing beside him with lips pressed against his ear. “I don’t like jokes. Who is this?”

“Oh, you know me, Walter. You’ve known me a long time.” A click, and nothing.

One of the bravest people of his time, Truman Capote was also quite probably one of the most fearful. Abandoned by his parents to aunts and other relatives, to the dust and desolation of rural Alabama, marked for ridicule and contempt by genetics of voice, appearance, manner, sexuality, he grew up knowing that the world is a dark and lonely place, both very hot and very cold. He hurt a lot of people behind that knowledge, especially later, spreading rancor and lies because he knew his friends didn’t really love him, were only using him, and he was damned if he’d be left holding the bag. But he knew that to step willfully into that humid half-light of loneliness, submerge in it for stretches of time, and bring back a story true to his fear was to earn the right to be alive.

You know me, Walter is horror, but it’s at least a contradiction of loneliness, and so a sign of life. A click, and nothing: that, for this man, was a confirmation of death, and so death itself.

…the garbage of loneliness stuffed down us until our guts burst bleeding green, we go screaming round the world, dying in our rented rooms, nightmare hotels, eternal homes of the transient heart.

– Other Voices, Other Rooms

Walter Ranney had always been a part of Capote. Eventually, Capote became him. Walter Ranney wasn’t a writer — he had no page to mark up, only people; no creative form, only a talent for destruction — and so did Capote cease to be a writer. “When he wanted to say something,” biographer Gerald Clarke says of his drug-, booze-, and illness-addled last years, “he picked up the telephone.” As Capote lost the ability to write, thus to objectify, analyze, and battle his fear, and replaced work with gossip, creativity with malice, he became the empty vessel, the faceless creature he’d foreseen in a nightmare some 40 years before his death. A creature living, to the degree that he did, through the phone — no doubt terrified of who might call him up, and what they’d say, or not say.