Part four of a series of posts adapted from a travel journal originally posted on apexart.org.

The loaner Samsung Javier gave me came loaded with a transportation app that tells you what bus lines to take, but I told him I prefer a real map, so he also thoughtfully supplied me with a pocket atlas. It’s eighty-nine pages long, and each street is dotted with little red numbers for all the bus lines that run up and down that particular stretch. I’ve been flipping through the atlas, tracing the buses I see in my neighborhood to their terminal points. There are a bazillion buses in Montevideo, so you almost never need to transfer. I could see every part of the neighborhoods between Pocitos and Ciudad Vieja by sampling the many bus lines connecting them.

Onboard, a man or a woman sits on a raised platform selling tickets. You can either pay with cash or scan your card on a yellow box and get a ticket. I have a card preloaded with payment for fifty bus rides. I was getting error messages pretty consistently, and the ticket person would always ask, “Una hora o dos?” So now I tell them “Una hora” before scanning, and sometimes I still get an error message and have to try several times. It’s a little mystery. I always get a ticket one way or another, though, and I can’t stop taking pictures out the window.

When people visit me in New York City, I encourage them to take a bus. Why pay for one of those tourist barges when you can take the M101 from Inwood to the East Village for $2.75?

But sometimes you have to get off the bus and walk. See things from the ground. 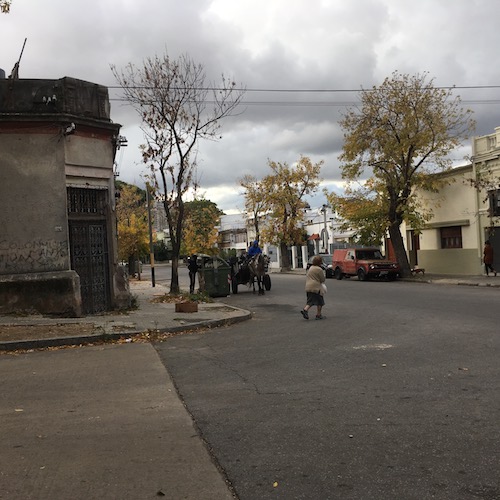 Week 1 included an 8 A.M. philosophy class at the Catholic University, a little league soccer game, a farmer’s market, several cultural events, three or four trips to Ciudad Vieja…. All this rushing about and checking off of items on my printout makes me feel like a game show contestant. They sent me to a Catholic mass, for which I overdressed. I’ve never been to a mass, but books and movies have told me that they are supposed to be torture for children, so I was surprised to see kids acting completely bananas in church: climbing all over the pews, going in and out of the confessionals. One little boy started to howl, and his mother picked him up and walked around with him for a while. Finally, she took him outside. So now he knows how to get out of this, I thought. Good for him. Is this Uruguayan Catholicism?

Apexart wants more reflection from me — more evidence that I’m being changed. I managed the following:

Some of these activities are things I wouldn’t have sought out said yes to. I guess it’s a bit like being a little kid and going where your parents go, because they took you, and having your tastes formed in that way without even realizing it. How much can my tastes be influenced in this way, now that I am 51?

They scheduled me for a therapy session, during which I am encouraged to explore my experiences. Instead complained about not being allowed to post as many photos as I want on my journal. Just to put my nose further out of joint, I spent a few hours of my free day at the air b’n’b trying to connect with Elizabeth on google chat for a required check-in — in case I’m getting lonely.

My father ran tours in the Soviet Union from 1965 until they stopped giving him entry visas in 1974. His trips were seat-of-the-pants affairs. They drove from place to place in VW microbuses and stayed in campgrounds.

From the Lipson Travel brochure:

Minor mishaps. Since you’re doing things for yourself, some things are bound to go wrong: running out of gas, sitting in the wrong seat at a movie, getting on the wrong bus and ending up somewhere you’ve never heard of — and then trying to get back on another city bus. Annoying but enriching. Perhaps the most enriching experience of all is to get sick — but not too sick — and spend some time in the ward of a Soviet hospital. But even if you don’t succeed in getting sick in the Soviet Union, you might want to invent something during your last week. It can teach you some things that any number of museum tours cannot.

Well, the old man would be proud, because I screwed up my shoulder. Pinched nerve or something, probably because I let myself get so uptight about the gallery and their expectations. I didn’t have to go to the hospital, but I did visit a clinic on the Bulevar General Artigas. I can report that a doctor’s visit without “socio” (what they call their universal coverage) costs around $25, and there was practically no wait. I got a script for muscle relaxers. I’ll be out soon.

So far, I haven’t missed anything on my print-out. Well, the field hockey practice, which is the one thing I was weirdly anxious about, was rained out, but that was an act of God. The last activity of the week was a sunset bike ride on the promenade that runs along the riverfront. I thought I’d have to cancel, what with the pinched nerve, but then there was that magic pill.

I could get used to this. 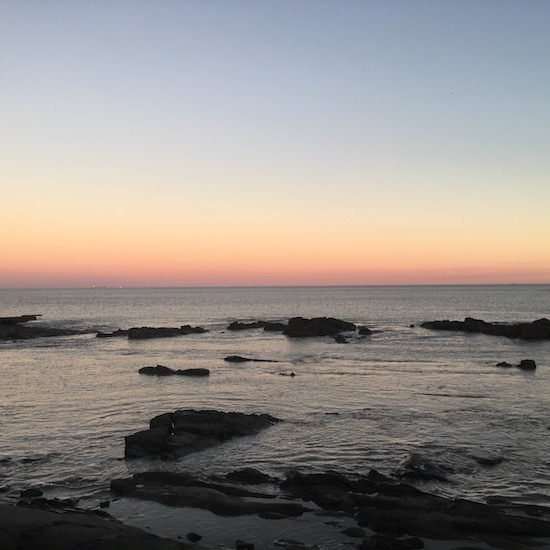