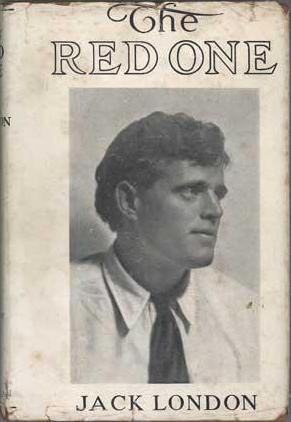 HILOBROW is pleased to present the fourth installment of our serialization of Jack London’s Jungian science fiction story “The Red One.” We have also serialized London’s science fiction novel The Scarlet Plague, and published it in a gorgeous paperback edition with a new introduction by Matthew Battles.

Lured into the uncharted jungle of Guadalcanal by an otherworldly noise, the naturalist Bassett is attacked by cannibalistic bushmen who worship “The Red One” (or “The Star-Born”), a deity which turns out to hail from extraterrestrial parts. First published posthumously, in the October 1918 issue of Cosmopolitan, the story is now in public domain.

Yet did Bassett insist on having his man’s will satisfied, at the woman’s risk, that he might solve the mystery of the Red One’s singing, though she should die long and horribly and screaming. And Balatta, being mere woman, yielded. She led him into the forbidden quadrant. An abrupt mountain, shouldering in from the north to meet a similar intrusion from the south, tormented the stream in which they had fished into a deep and gloomy gorge. After a mile along the gorge, the way plunged sharply upward until they crossed a saddle of raw limestone which attracted his geologist’s eye. Still climbing, although he paused often from sheer physical weakness, they scaled forest-clad heights until they emerged on a naked mesa or tableland. Bassett recognized the stuff of its composition as black volcanic sand, and knew that a pocket magnet could have captured a full load of the sharply angular grains he trod upon. 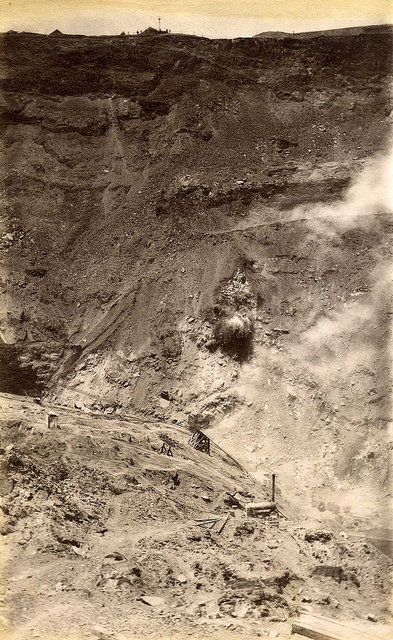 And then holding Balatta by the hand and leading her onward, he came to it — a tremendous pit, obviously artificial, in the heart of the plateau. Old history, the South Seas Sailing Directions, scores of remembered data and connotations swift and furious, surged through his brain. It was Mendana who had discovered the islands and named them Solomon’s, believing that he had found that monarch’s fabled mines. They had laughed at the old navigator’s child-like credulity; and yet here stood himself, Bassett, on the rim of an excavation for all the world like the diamond pits of South Africa.

But no diamond this that he gazed down upon. Rather was it a pearl, with the depth of iridescence of a pearl; but of a size all pearls of earth and time, welded into one, could not have totalled; and of a colour undreamed of in any pearl, or of anything else, for that matter, for it was the colour of the Red One. And the Red One himself Bassett knew it to be on the instant. A perfect sphere, full two hundred feet in diameter, the top of it was a hundred feet below the level of the rim. He likened the colour quality of it to lacquer. Indeed, he took it to be some sort of lacquer, applied by man, but a lacquer too marvellously clever to have been manufactured by the bush-folk. Brighter than bright cherry-red, its richness of colour was as if it were red builded upon red. It glowed and iridesced in the sunlight as if gleaming up from underlay under underlay of red. 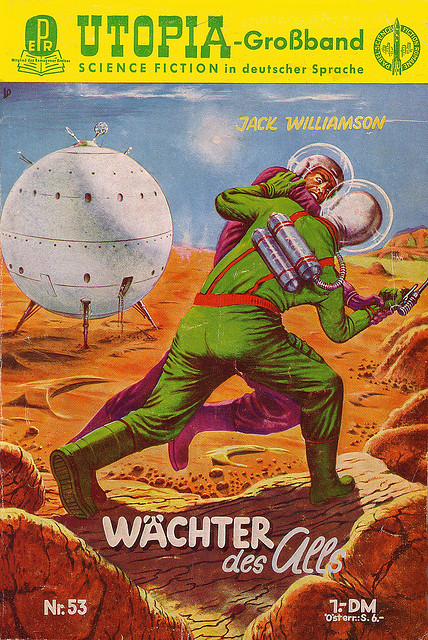 In vain Balatta strove to dissuade him from descending. She threw herself in the dirt; but, when he continued down the trail that spiralled the pit-wall, she followed, cringing and whimpering her terror. That the red sphere had been dug out as a precious thing, was patent. Considering the paucity of members of the federated twelve villages and their primitive tools and methods, Bassett knew that the toil of a myriad generations could scarcely have made that enormous excavation.

He found the pit bottom carpeted with human bones, among which, battered and defaced, lay village gods of wood and stone. Some, covered with obscene totemic figures and designs, were carved from solid tree trunks forty or fifty feet in length. He noted the absence of the shark and turtle gods, so common among the shore villages, and was amazed at the constant recurrence of the helmet motive. What did these jungle savages of the dark heart of Guadalcanal know of helmets? Had Mendana’s men-at-arms worn helmets and penetrated here centuries before? And if not, then whence had the bush-folk caught the motive?

Advancing over the litter of gods and bones, Balatta whimpering at his heels, Bassett entered the shadow of the Red One and passed on under its gigantic overhang until he touched it with his finger-tips. No lacquer that. Nor was the surface smooth as it should have been in the case of lacquer. On the contrary, it was corrugated and pitted, with here and there patches that showed signs of heat and fusing. Also, the substance of it was metal, though unlike any metal, or combination of metals, he had ever known. As for the colour itself, he decided it to be no application. It was the intrinsic colour of the metal itself. 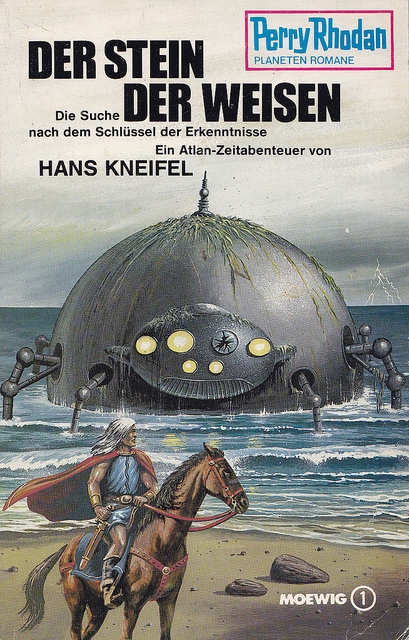 He moved his finger-tips, which up to that had merely rested, along the surface, and felt the whole gigantic sphere quicken and live and respond. It was incredible! So light a touch on so vast a mass! Yet did it quiver under the finger-tip caress in rhythmic vibrations that became whisperings and rustlings and mutterings of sound — but of sound so different; so elusively thin that it was shimmeringly sibilant; so mellow that it was maddening sweet, piping like an elfin horn, which last was just what Bassett decided would be like a peal from some bell of the gods reaching earthward from across space.

He looked at Balatta with swift questioning; but the voice of the Red One he had evoked had flung her face downward and moaning among the bones. He returned to contemplation of the prodigy. Hollow it was, and of no metal known on earth, was his conclusion. It was right-named by the ones of old-time as the Star-Born. Only from the stars could it have come, and no thing of chance was it. It was a creation of artifice and mind. Such perfection of form, such hollowness that it certainly possessed, could not be the result of mere fortuitousness. A child of intelligences, remote and unguessable, working corporally in metals, it indubitably was. He stared at it in amaze, his brain a racing wild-fire of hypotheses to account for this far-journeyer who had adventured the night of space, threaded the stars, and now rose before him and above him, exhumed by patient anthropophagi, pitted and lacquered by its fiery bath in two atmospheres.

But was the colour a lacquer of heat upon some familiar metal? Or was it an intrinsic quality of the metal itself? He thrust in the blue-point of his pocket-knife to test the constitution of the stuff. Instantly the entire sphere burst into a mighty whispering, sharp with protest, almost twanging goldenly, if a whisper could possibly be considered to twang, rising higher, sinking deeper, the two extremes of the registry of sound threatening to complete the circle and coalesce into the bull-mouthed thundering he had so often heard beyond the taboo distance.

Forgetful of safety, of his own life itself, entranced by the wonder of the unthinkable and unguessable thing, he raised his knife to strike heavily from a long stroke, but was prevented by Balatta. She upreared on her own knees in an agony of terror, clasping his knees and supplicating him to desist. In the intensity of her desire to impress him, she put her forearm between her teeth and sank them to the bone. 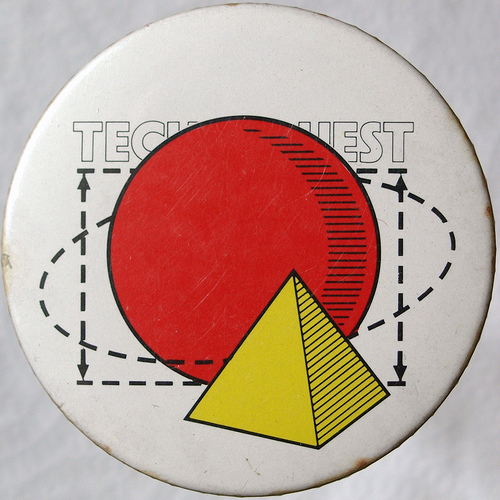 He scarcely observed her act, although he yielded automatically to his gentler instincts and withheld the knife-hack. To him, human life had dwarfed to microscopic proportions before this colossal portent of higher life from within the distances of the sidereal universe. As had she been a dog, he kicked the ugly little bushwoman to her feet and compelled her to start with him on an encirclement of the base. Part way around, he encountered horrors. Even, among the others, did he recognize the sun-shrivelled remnant of the nine-years girl who had accidentally broken Chief Vngngn’s personality taboo. And, among what was left of these that had passed, he encountered what was left of one who had not yet passed. Truly had the bush-folk named themselves into the name of the Red One, seeing in him their own image which they strove to placate and please with such red offerings.

Farther around, always treading the bones and images of humans and gods that constituted the floor of this ancient charnel-house of sacrifice, he came upon the device by which the Red One was made to send his call singing thunderingly across the jungle-belts and grass-lands to the far beach of Ringmanu. Simple and primitive was it as was the Red One’s consummate artifice. A great king-post, half a hundred feet in length, seasoned by centuries of superstitious care, carven into dynasties of gods, each superimposed, each helmeted, each seated in the open mouth of a crocodile, was slung by ropes, twisted of climbing vegetable parasites, from the apex of a tripod of three great forest trunks, themselves carved into grinning and grotesque adumbrations of man’s modern concepts of art and god. From the striker king-post, were suspended ropes of climbers to which men could apply their strength and direction. Like a battering ram, this king-post could be driven end-onward against the mighty red-iridescent sphere.

Here was where Ngurn officiated and functioned religiously for himself and the twelve tribes under him. Bassett laughed aloud, almost with madness, at the thought of this wonderful messenger, winged with intelligence across space, to fall into a bushman stronghold and be worshipped by ape-like, man-eating and head-hunting savages. It was as if God’s Word had fallen into the muck mire of the abyss underlying the bottom of hell; as if Jehovah’s Commandments had been presented on carved stone to the monkeys of the monkey cage at the Zoo; as if the Sermon on the Mount had been preached in a roaring bedlam of lunatics.