This year marks the 110th anniversary of the publication of The Iron Heel, a dystopian Radium Age science-fiction novel by Jack London. In it, a far-future historian recounts how — in the early 20th century — a cabal of robber barons bankrupted the middle class, reduced farmers to serfdom, and used mercenaries to keep laborers in check. George Orwell described London as having made “a very remarkable prophecy of the rise of Fascism”; let’s hope London’s prophecy isn’t applicable to our own era. HiLoBooks will serialize The Iron Heel at HILOBROW through 2018. 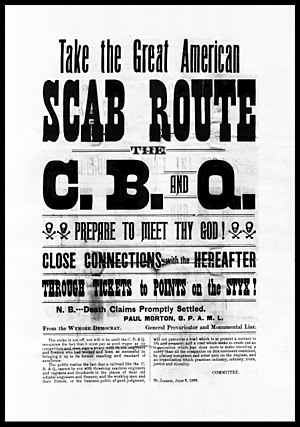 It was near the end of January, 1913, that the changed attitude of the Oligarchy toward the favored unions was made public. The newspapers published information of an unprecedented rise in wages and shortening of hours for the railroad employees, the iron and steel workers, and the engineers and machinists. But the whole truth was not told. The oligarchs did not dare permit the telling of the whole truth. In reality, the wages had been raised much higher, and the privileges were correspondingly greater. All this was secret, but secrets will out. Members of the favored unions told their wives, and the wives gossiped, and soon all the labor world knew what had happened.

It was merely the logical development of what in the nineteenth century had been known as grab-sharing. In the industrial warfare of that time, profit-sharing had been tried. That is, the capitalists had striven to placate the workers by interesting them financially in their work. But profit-sharing, as a system, was ridiculous and impossible. Profit-sharing could be successful only in isolated cases in the midst of a system of industrial strife; for if all labor and all capital shared profits, the same conditions would obtain as did obtain when there was no profit-sharing.

So, out of the unpractical idea of profit-sharing, arose the practical idea of grab-sharing. “Give us more pay and charge it to the public,” was the slogan of the strong unions.* And here and there this selfish policy worked successfully. In charging it to the public, it was charged to the great mass of unorganized labor and of weakly organized labor. These workers actually paid the increased wages of their stronger brothers who were members of unions that were labor monopolies. This idea, as I say, was merely carried to its logical conclusion, on a large scale, by the combination of the oligarchs and the favored unions.

* All the railroad unions entered into this combination with the oligarchs, and it is of interest to note that the first definite application of the policy of profit-grabbing was made by a railroad union in the nineteenth century A.D., namely, the Brotherhood of Locomotive Engineers. P.M. Arthur was for twenty years Grand Chief of the Brotherhood. After the strike on the Pennsylvania Railroad in 1877, he broached a scheme to have the Locomotive Engineers make terms with the railroads and to “go it alone” so far as the rest of the labor unions were concerned. This scheme was eminently successful. It was as successful as it was selfish, and out of it was coined the word “arthurization,” to denote grab-sharing on the part of labor unions. This word “arthurization” has long puzzled the etymologists, but its derivation, I hope, is now made clear.

As soon as the secret of the defection of the favored unions leaked out, there were rumblings and mutterings in the labor world. Next, the favored unions withdrew from the international organizations and broke off all affiliations. Then came trouble and violence. The members of the favored unions were branded as traitors, and in saloons and brothels, on the streets and at work, and, in fact, everywhere, they were assaulted by the comrades they had so treacherously deserted.

Countless heads were broken, and there were many killed. No member of the favored unions was safe. They gathered together in bands in order to go to work or to return from work. They walked always in the middle of the street. On the sidewalk they were liable to have their skulls crushed by bricks and cobblestones thrown from windows and house-tops. They were permitted to carry weapons, and the authorities aided them in every way. Their persecutors were sentenced to long terms in prison, where they were harshly treated; while no man, not a member of the favored unions, was permitted to carry weapons. Violation of this law was made a high misdemeanor and punished accordingly.

As a result, driven back upon themselves from every side, the traitors and their families became clannish. Finding it impossible to dwell in safety in the midst of the betrayed proletariat, they moved into new localities inhabited by themselves alone. In this they were favored by the oligarchs. Good dwellings, modern and sanitary, were built for them, surrounded by spacious yards, and separated here and there by parks and playgrounds. Their children attended schools especially built for them, and in these schools manual training and applied science were specialized upon. Thus, and unavoidably, at the very beginning, out of this segregation arose caste. The members of the favored unions became the aristocracy of labor. They were set apart from the rest of labor. They were better housed, better clothed, better fed, better treated. They were grab-sharing with a vengeance.

In the meantime, the rest of the working class was more harshly treated. Many little privileges were taken away from it, while its wages and its standard of living steadily sank down. Incidentally, its public schools deteriorated, and education slowly ceased to be compulsory. The increase in the younger generation of children who could not read nor write was perilous.

The capture of the world-market by the United States had disrupted the rest of the world. Institutions and governments were everywhere crashing or transforming. Germany, Italy, France, Australia, and New Zealand were busy forming cooperative commonwealths. The British Empire was falling apart. England’s hands were full. In India revolt was in full swing. The cry in all Asia was, “Asia for the Asiatics!” And behind this cry was Japan, ever urging and aiding the yellow and brown races against the white. And while Japan dreamed of continental empire and strove to realize the dream, she suppressed her own proletarian revolution. It was a simple war of the castes, Coolie versus Samurai, and the coolie socialists were executed by tens of thousands. Forty thousand were killed in the street-fighting of Tokio and in the futile assault on the Mikado’s palace. Kobe was a shambles; the slaughter of the cotton operatives by machine-guns became classic as the most terrific execution ever achieved by modern war machines. Most savage of all was the Japanese Oligarchy that arose. Japan dominated the East, and took to herself the whole Asiatic portion of the world-market, with the exception of India.

England managed to crush her own proletarian revolution and to hold on to India, though she was brought to the verge of exhaustion. Also, she was compelled to let her great colonies slip away from her. So it was that the socialists succeeded in making Australia and New Zealand into cooperative commonwealths. And it was for the same reason that Canada was lost to the mother country. But Canada crushed her own socialist revolution, being aided in this by the Iron Heel. At the same time, the Iron Heel helped Mexico and Cuba to put down revolt. The result was that the Iron Heel was firmly established in the New World. It had welded into one compact political mass the whole of North America from the Panama Canal to the Arctic Ocean.

And England, at the sacrifice of her great colonies, had succeeded only in retaining India. But this was no more than temporary. The struggle with Japan and the rest of Asia for India was merely delayed. England was destined shortly to lose India, while behind that event loomed the struggle between a united Asia and the world.

And while all the world was torn with conflict, we of the United States were not placid and peaceful. The defection of the great unions had prevented our proletarian revolt, but violence was everywhere. In addition to the labor troubles, and the discontent of the farmers and of the remnant of the middle class, a religious revival had blazed up. An offshoot of the Seventh Day Adventists sprang into sudden prominence, proclaiming the end of the world.

“Confusion thrice confounded!” Ernest cried. “How can we hope for solidarity with all these cross purposes and conflicts?”

And truly the religious revival assumed formidable proportions. The people, what of their wretchedness, and of their disappointment in all things earthly, were ripe and eager for a heaven where industrial tyrants entered no more than camels passed through needle-eyes. Wild-eyed itinerant preachers swarmed over the land; and despite the prohibition of the civil authorities, and the persecution for disobedience, the flames of religious frenzy were fanned by countless camp-meetings.

It was the last days, they claimed, the beginning of the end of the world. The four winds had been loosed. God had stirred the nations to strife. It was a time of visions and miracles, while seers and prophetesses were legion. The people ceased work by hundreds of thousands and fled to the mountains, there to await the imminent coming of God and the rising of the hundred and forty and four thousand to heaven. But in the meantime God did not come, and they starved to death in great numbers. In their desperation they ravaged the farms for food, and the consequent tumult and anarchy in the country districts but increased the woes of the poor expropriated farmers.

Also, the farms and warehouses were the property of the Iron Heel. Armies of troops were put into the field, and the fanatics were herded back at the bayonet point to their tasks in the cities. There they broke out in ever recurring mobs and riots. Their leaders were executed for sedition or confined in madhouses. Those who were executed went to their deaths with all the gladness of martyrs. It was a time of madness. The unrest spread. In the swamps and deserts and waste places, from Florida to Alaska, the small groups of Indians that survived were dancing ghost dances and waiting the coming of a Messiah of their own.

And through it all, with a serenity and certitude that was terrifying, continued to rise the form of that monster of the ages, the Oligarchy. With iron hand and iron heel it mastered the surging millions, out of confusion brought order, out of the very chaos wrought its own foundation and structure.

“Just wait till we get in,” the Grangers said — Calvin said it to us in our Pell Street quarters. “Look at the states we’ve captured. With you socialists to back us, we’ll make them sing another song when we take office.”

“The millions of the discontented and the impoverished are ours,” the socialists said. “The Grangers have come over to us, the farmers, the middle class, and the laborers. The capitalist system will fall to pieces. In another month we send fifty men to Congress. Two years hence every office will be ours, from the President down to the local dog-catcher.”

To all of which Ernest would shake his head and say:

“How many rifles have you got? Do you know where you can get plenty of lead? When it comes to powder, chemical mixtures are better than mechanical mixtures, you take my word.”