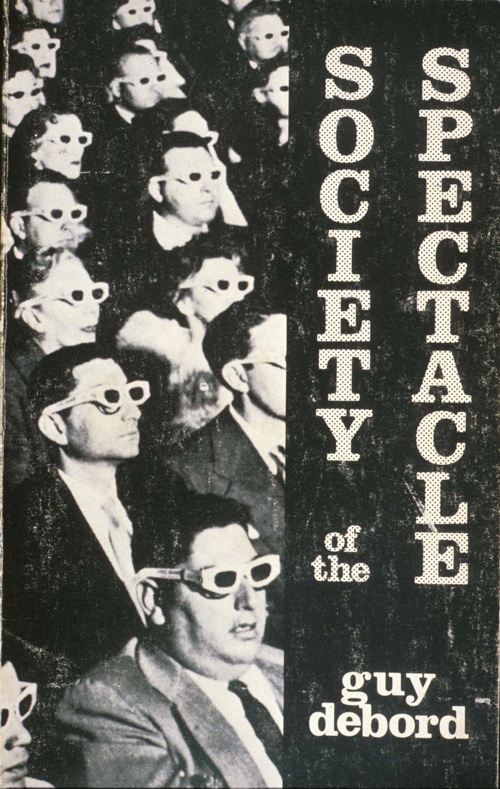 GUY DEBORD (1931-94) was a founder and key intellectual figure in the Situationist International, an avant-garde Marxist collective influential in postwar France, especially during the 1968 uprising in Paris. Debord’s book The Society of the Spectacle (1967) articulates the movement’s main ideas, most centrally the dangers of runaway colonization of everyday life. In Debord’s analysis, experiences as well as things are assimilated by the forces of exchange, leading to the production of consumption and, eventually, the consuming self as the main commodities of late capitalism. Debord accounts for the ongoing, adaptive success of capital systems, against the predictions of inner contradiction and imminent demise made by orthodox Marxists, by noting that spectacle constantly renews itself, and its pleasures, for a doped audience robbed of political agency. If we ourselves are the commodities that we produce and consume, there will never be any alienated labor. Debord thus echoes arguments made by other subtle Marxists, such as Adorno and Horkheimer, and anticipates the ones made by postmodernist leftists, such as Fredric Jameson. The Situationist International eventually suffered the usual factional disputes and was dissolved by Debord in 1972, after which he concentrated on reading and some filmmaking. The Society of the Spectacle is a landmark in twentieth-century political thought and has never been out of print, but the enduring relevance of Debord’s prescient analysis did not make him happy. He consumed his own agency through chronic alcoholism and, in 1994, committed suicide by gunshot.

On his or her birthday, HiLobrow irregularly pays tribute to one of our high-, low-, no-, or hilobrow heroes. Also born this date: Stan Lee, Öyvind Fahlström, Arthur Eddington, Alasdair Gray.