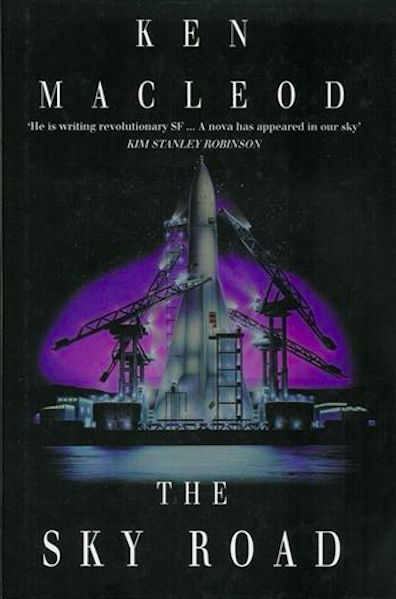 This alternate sequel to The Stone Canal (1996), the second installment in MacLeod’s Fall Revolution series, is set partly in a distant, idyllic future. Centuries after the civilization-destroying Deliverance, Merrial, a beautiful “tinker” (i.e., a disillusioned, life-extended communist), falls in love with Clovis, a young scholar researching a biography of Myra Godwin-Davidov (“The Deliverer”) and working as a welder on the first spaceship in centuries. She seduces him into extrapolating the ship’s future from Myra’s story, which takes place c. 2050, during an inflection point. Humankind’s future depends on a decision that Myra — who momentarily appeared near the conclusion of The Stone Canal — must now make. How she arrived at this point requires us to travel back even further, to her idealistic days as a Trotskyist in 1970s Glasgow — and the many compromises she’s made en route to her position as the woman in charge of the world’s last remaining nuclear weapons. When the Sheenisov (a Russian-Chinese superpower) threaten global conquest, can she avoid nuclear holocaust? Although published last, I’d suggest reading The Sky Road before the others.

Fun facts: Asked by an interviewer, “Of all the characters you’ve conjured, which one did you most relate to and why?”, MacLeod replied, “I think it was Myra in The Sky Road. She has a lot of baggage, a very long life’s load of knowledge and guilt, but she still goes forward and acts decisively.”