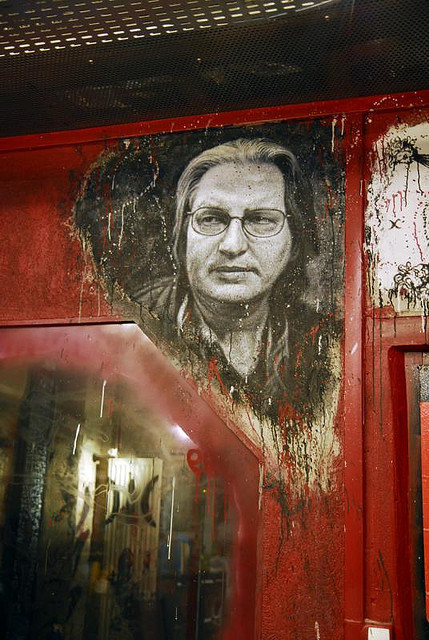 American science-fiction writer BRUCE STERLING (born 1954) will be forever associated with the style, or subgenre, known as cyberpunk, but unlike friend and collaborator William Gibson — their alt-history novel about the invention of the Babbage computer, The Difference Engine (1990), anchors the steampunk canon — his ideas and projects extend well beyond the crafting of fiction. His Dead Media Project, for example, is an ongoing ramble of crowdsourced research, archiving field notes on every form of now-defunct communications technology that once allowed for McLuhan’s celebrated “extensions of man.” The accompanying Dead Media Manifesto — you knew there had to be one — is written in the same drawling folksy style that Sterling has consistently offered from podium and panel. It relays an anecdote recorded from Jacqueline Goddard, veteran of mid-century Parisian café society. “After a day of work, the artists wanted to get away from their studios, and get away from what they were creating. They all met in the cafés to argue about this and that, to discuss their work, politics and philosophy,” she said in 1995. “We went to the bar of La Coupole. Bob, the barman, was a terrible nice chap… As there was no telephone in those days everybody used him to leave messages. At the Dome we also had a little place behind the door for messages. The telephone was the death of Montparnasse.” Listen to that, “all you digital hipsters,” the Manifesto intones: media have been coming and going since the advent of consciousness; today’s text is tomorrow’s scrapped scribble behind a café door — indeed, not even that. “For whom does the telephone bell toll?” Sterling wants to know. “It tolls for me and thee — sooner or later.” Retweet that, “friends.”

On his or her birthday, HiLobrow irregularly pays tribute to one of our high-, low-, no-, or hilobrow heroes. Also born this date: Sarah Michelle Gellar, Loretta Lynn, Anthony Michael Hall.