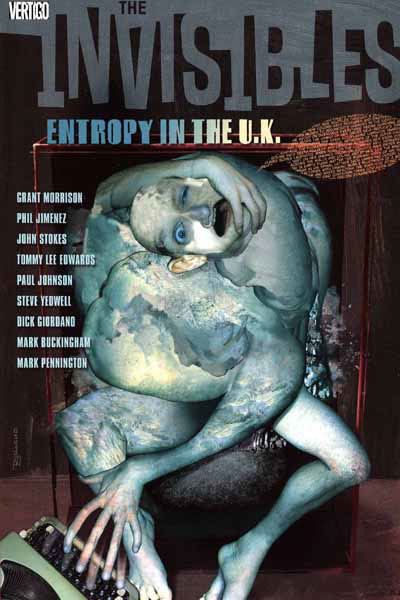 GRANT MORRISON’s (born 1960) house was on a distinguish­ed street in Glasgow, purchased with the proceeds from his 1989 Batman graphic novel, Arkham Asylum. In the attic was a replica of his teenage bedroom; downstairs lurked the cellar in which, he told me, he summoned the giant floating head of John Lennon. These two rooms are twin engines, generating the unceasing momentum of ideas and intensity that characterizes Morrison’s comic-book writing. A self-proclaimed chaos magician, for The Invisibles (1994-2000), Morrison’s early Pop postmodernism (the god-like hand of the artist appeared in the 1988-90 run of Animal Man) became a florid psychoactive performance as Morrison reshaped himself in the image of lead character King Mob — and vice versa. Next, Marvel handed him the X-Men (renamed New X-Men during his 2001-04 run) and he wrought wonders: his series’ arc opened with a mutant holocaust and ended in the far future in a battle against sentient bacteria. Morrison’s comics, which feature hybrids of occult and scientific speculation, robust sexuality, new drugs, and inter-generational rivalry (he attributes his frosty relationship with Alan Moore to a punk vs. hippy conflict), may appear to spring entirely from his basement room, as it were. But the attic also deserves recognition: Morrison’s work is exceptional for its nuanced characterization, abiding insight into the pleasures of the comic form, and ready access to the polar intensities of bliss and despair.