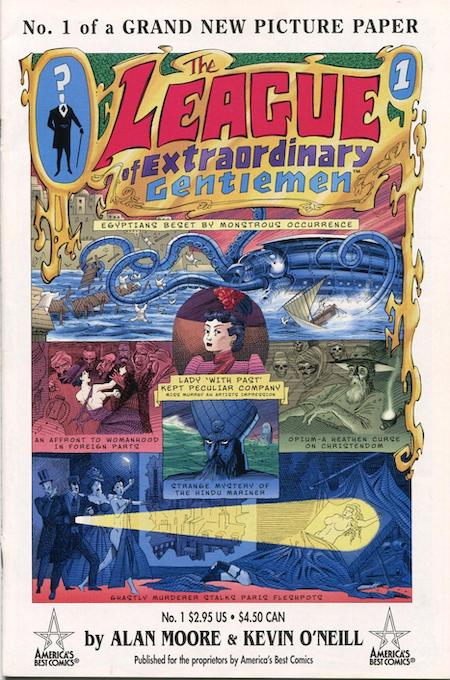 When Mina Harker, whom readers of Dracula will recognize as Bram Stoker’s brave, perspicacious, thrice-bitten heroine, is recruited by British Intelligence agent Campion Bond (James Bond’s grandfather), she is tasked with recruiting other Victorian-era superheroic individuals — (Jules Verne’s) Captain Nemo, (H. Rider Haggard’s) Allan Quatermain, (Robert Louis Stevenson’s) Dr. Jekyll/Mr. Hyde, (H.G. Wells’s) Invisible Man — to protect the peace and safety of the British Empire, c. 1898. Which are threatened by (Sax Rohmer’s) Fu Manchu, who has stolen antigravity material from (Wells’s) Professor Cavor, with which he plans to build an airship that will pummel London into submission. M., to whom the League reports, turns out to be one of of the greatest Victorian-era villains, with nefarious plans of his own. It’s a fun, fast-paced metatextual adventure perfectly illustrated by Kevin O’Neill, who balances the whimsical with the sordid and violent. Moore, as ever, requires us to reconsider what it means to be a hero — with this agonistic crew of troubled, sociopathic misfits. This is rich stuff — so many literary references, often obscure. This reader is grateful to Jess Nevins, author of the Encyclopedia of Fantastic Victoriana, who has provided copious annotations.