Part nine of a series of posts adapted from a travel journal originally posted on apexart.org. 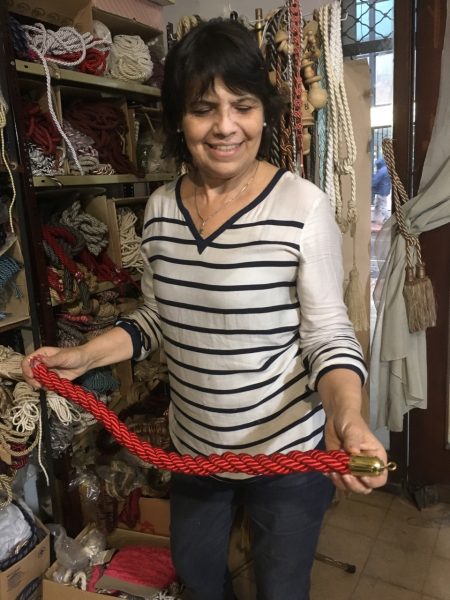 She owns a store in Ciudad Vieja called Tirio. They make and sell custom tassels, piping, fringe, pompoms, gimp — all manner of notions and trims for furniture, curtains, and every sort of military uniform and traditional costume. Monica is showing off a stanchion rope.

I’ve been on a number of these backstage tours now. I’ve seen a bronze medal factory, a home movie archive at the Universidad Católica, and of course the surgery. Javier’s mother, who owns a restaurant, showed me how to make ravioli while we discussed Joaquín Torres-García, her favorite Uruguayan painter. I’m always excited when something like this comes up on my schedule. Maybe the oddest such experience was when I reported for what I thought would be a tour of a numismatic museum and ended up meeting the head of planning and risk management for the Central Bank of Uruguay. He had not been briefed on my visit, and it didn’t clear things up much when I handed him one of my apexart calling cards, but we passed a pleasant hour talking about public banking, MERCOSUR, and the inflationary effects of monetary tightening from the United States.

This is a page from one of the many books Monica has containing formulas for the notions and cords and tassels. 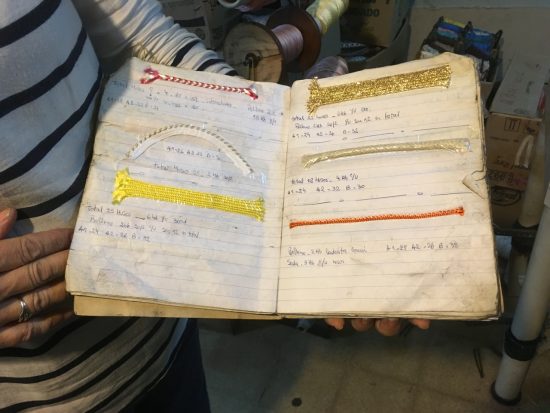 It’s funny to think that everything in the shop starts out as thread. That is the only raw material they buy. The workroom is crammed with old mechanical looms — Rube Goldberg contraptions they bought in Italy in the 1970s, presumably from centuries-old manufacturers who were going out of business. Each product, a trimming for an ottoman, say, might go through several of them, transforming along the way from thread to cord to thicker cord to tassel.

As I said, I’ve been on quite a few of these field trips, but I think Tirio is my favorite. I love the clattering machines, the hanging gardens of ropes and braids, the rows of colored thread. It brings me back to a time when I was eight, nine years old and my mother worked in a furniture store stuffing cushions and stapling webbing onto the bottoms of sofas. Her boss used to let me take home sample books of ugly burlap upholstery fabric.

This cluttered old workshop reminds me of Ciudad Vieja itself. I fantasize about stowing away in Ciudad Vieja, or coming back one day to disappear. It has that great urban quality of surprise — an unexpected view of container ships at the bottom of an ancient street, a mysterious message stenciled on a doorway. Every time I’m sent here for one thing or another, I wander a bit farther out from the commercial center to see more of its beautiful residential ruins, the shutters and laundry-lined balconies, and I feel an anticipatory longing for the place.

Oh, another thing. Look at the picture of Monica. You can see a bit of lattice in the upper right of the photograph — a curvy variation on the diamond-pattern security grate, slightly more beautiful than it needs to be. I’ve seen them in every part of town, and they’re so pleasing to me that it took me a while to understand what their function was. I’ll miss them, too.