Part six of a series of posts adapted from a travel journal originally posted on apexart.org.

My week two printout from apexart sent me on a trifecta of tango-related activities.

First up: a free concert by tango singer Valeria Lima at Mercado Agricola de Montevideo (MAM), which is an enclosed farmer’s market — something like the one on Fairfax in Los Angeles, if you’ve ever been there, except it’s older and more elaborately restored. I had a date, a friend of Javier’s named Florencia. She picked me up in her car, and I could tell right away that she was a good person by the way she let people cross at intersections. We stopped on the way for her nephew Martin, a high school student who wanted a chance to practice his English.

The concert was in the food court. We got there too late to get anywhere near the front, but that was okay. It gave us a chance to talk. While Florencia was off ordering us a pizza (execrable; sorry, Montevideo), Martin confessed that he doesn’t really like tango. He said there was a contemporary electronic form of tango, and he likes that better. I took the opportunity to debrief him while we drank our Coca Colas. (Uruguayans love Coca Cola to the exclusion of every other soft drink. The logo is ubiquitous.)

Martin told me that a lot of people live in Parque Batlle, including many Venezuelan refugees. I remembered seeing the remains of campfires, and charred kettles, and once a femur bone that I hoped was from a cow. The students at Martin’s school bring meals around and get to know the people in the park. He wrote a term paper on immigration for his socioeconomics class. All high school students, apparently, are required to take a socioeconomics course.

Here’s what I learned about how education works.

The public university is free, and admission is open. If you graduate and get a job in the field for which you were educated, you pay a tax–for life. If you don’t graduate, or don’t get such a job, no tax. According to Florencia and Martin, there’s no such thing as flunking out. They say there is a problem of people staying in school for the “student discounts,” and never graduating.

I tend to think, fine! Education should be free, and let it last forever if nothing awaits you out there. But I didn’t get the sense that they were worried about freeloading. I think they meant that people weren’t contributing, and society needs all hands.

I thought about something I’d heard from Valentina’s aunt Stella, who had been my date for the murga. She’s an architect, and she told me that architecture students travel for nine months after graduating. She’d traveled with a small group to the United States and Japan and all over Europe. When I asked how the trips were paid for, she said each class designs and builds a house to raffle off. The students sell lottery tickets throughout their three years of school, and everyone — even laborers — will buy tickets to support them in their post-graduate travel. Why? Because it’s for them, too, in a way. The young architects bring new ideas home to their little out-of-the-way country.

Apropos of nothing, here’s the outside of the Montevideo Communist Club, which I’ve walked by several times. 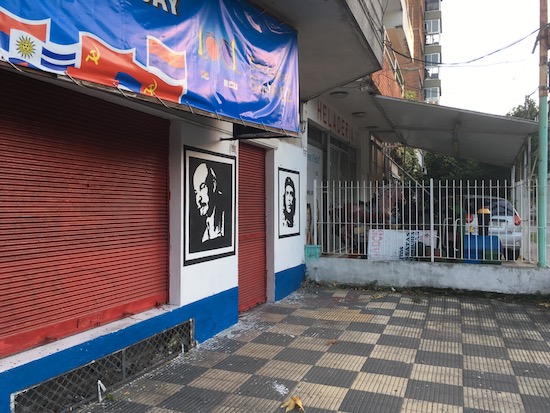 Once, the door was open, and I got a glimpse of linoleum tiles and folding chairs. It reminded me of one of those Italian social clubs in my old neighborhood in South Philly, except that two bearded men were arguing vigorously.

Tango event #2: a concert by Silvio Previale — Uruguay’s greatest accordionists, according to my printout. He was wistfully comic and played tango after tango with offhand panache.

It’s the 100th anniversary of “La Cumparsita,” which is the tango you think of when you think of a tango. You might know it as “Humberto’s Hideway.” But did you know it’s from Uruguay?

A keyboard ran down the front of his shirt behind the accordion keyboard. He gave us two encores, then stood up and walked offstage still playing, and then we could see him chatting with the ticket girl on the other side of the glass wall.

Tango event #3 was a dance lesson. I’ve never taken any kind of dance class, and it seems a little crazy to start with tango. The studio was lovely and sad, with a large, framed mirror on one wall and Depression-era bunting and posters of tango dancers. Wooden chairs and tables had been pushed to the edge of the dance floor, where people sat waiting for the class to begin. 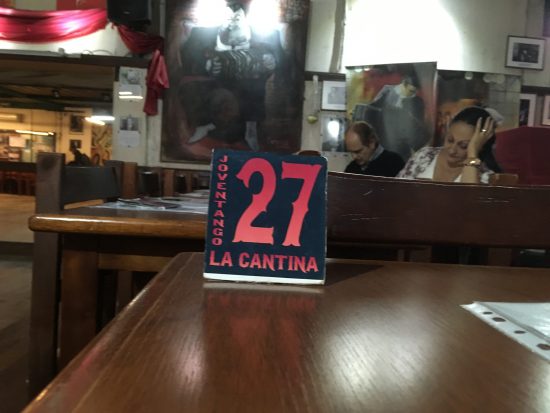 There were women made up and dressed for a night out, and a smaller number of men. I imagined the young men and women were there to brush up on an important courting skill. One of the older women, seeing that I looked a little lost, directed me to a window by the entrance, where I bought a ticket for the lesson.

A small, elegant older gentleman walked into the middle of the floor and clapped, and we gathered around him. He put on a CD and we began walking around the room in a circle — slowly, deliberately, in time with the music. We kept it up for several songs while the teacher looked us over. He came and walked arm in arm with me for a while, making correcting and encouraging gestures. I must have done something right, because he nodded and went back to the middle of the circle.

Next, we lined up in rows facing the instructor and tried to follow a routine of perhaps twelve steps, and here all sense of competence fled. Over and over, he demonstrated the steps. The others began catching on, but for me each step seemed completely unpredictable and completely unrelated to the others and, worse, the movements seemed to have no correspondence with the music.

Some of us were taken aside for remedial instructions. I was made to dance a very simple box step with one of the older men, and then there was more remediation. I tried. I lasted over an hour before giving up — smiling and waving as I excused myself, gathered my things, and exited by the ticket booth.

On the way in, I had somehow not noticed that the studio was partitioned off in one corner in a 19th century arcade, with vaulted cast-iron-and-glass ceilings. There were several cafes and restaurants, and almost no customers at this late hour. I sat down and had a steak and a beer and looked through the picture window at the couples moving across the floor like wind-up toys, or like the opening scenes of They Shoot Horses, Don’t They? 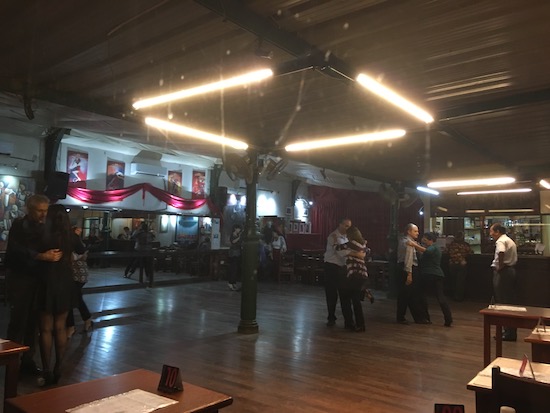