Part five of a series of posts adapted from a travel journal originally posted on apexart.org.

On May 1 (the real Labor Day), Javier had a special treat for me: a trip to the countryside. He picked me up in his Corsa and we drove about an hour and a half east of Montevideo to the village of Solís de Mataojo. Uruguay, it seems, is mostly prairie (or pampas, I suppose). As we approached the village, Javier pointed to some low hills in the distance and told me they were the highest place in the country.

Valentina (Javier’s wife) has deep roots in Solís de Mataojo. We met her and their young daughter at the home of her father, Don Filipe, where they’d spent the long weekend. Filipe is a cattleman and a vintner and lives in a house built on the land of his father — Don Pepe, the family patriarch. He sells beef in the United States. You might have had some, but it would have been very expensive.

I met so many members of Valentina’s extended family: aunts, cousins, siblings, stepmother, on and on, and every one kissed me hello. The big family crowd was gathered for the holiday, and for the festival of San Silviano, about which more later.

We walked up a quarter-mile lane of tall eucalyptus trees to visit Don Pepe, Valentina’s grandfather. He is a tall, handsome 96-year-old who lives in a 250-year-old adobe house with exterior walls a meter thick. A widower, Don Pepe recently remarried. 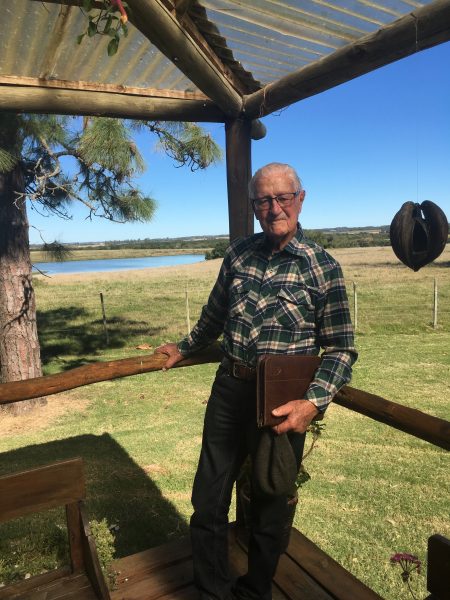 Don Pepe’s family has lived on the ranch since Christmas Eve 1919. This cart belonged to his father, who was a seller of caldrons like the one hanging underneath. 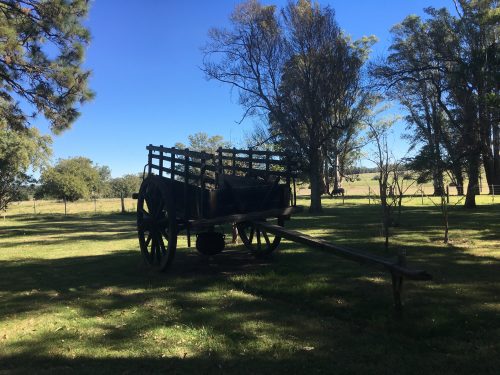 There’s a legendary feel to the place, like an Uruguayan South Fork, except that everyone is genuinely nice.

Pepe has traveled the world. Four years ago, when he was only 92, he spent two months in China — the first month with his daughter, the second on his own. And the world has traveled to his ranch. I had the honor of signing his visitor’s log, after which he flipped back many pages and showed me the signature of Ariel Sharon. Then they took me to a hallway where Pepe displays some of the fascinating tools and other things he’s found on his ranch over the years, including several guns from the 19th century. Pepe’s daughter Inez pointed out to me a kind of fossil that is only found here and in South Africa, because of course they were once on the same continent. And then we walked back along the eucalyptus lane to the main road for the San Silviano festival.

In the 1950s, Don Pepe welcomed five families of Italian war refugee to live on his ranch. One day, he was visiting with one of the families and saw in their house a statue of San Silviano that they had carried with them from the old country, so he built a roadside shrine and chapel for it. The chapel came down twice in the strong winds that blow through this part of the country. The third chapel, built in the 1960s, is a stout little A-frame painted red white and blue. 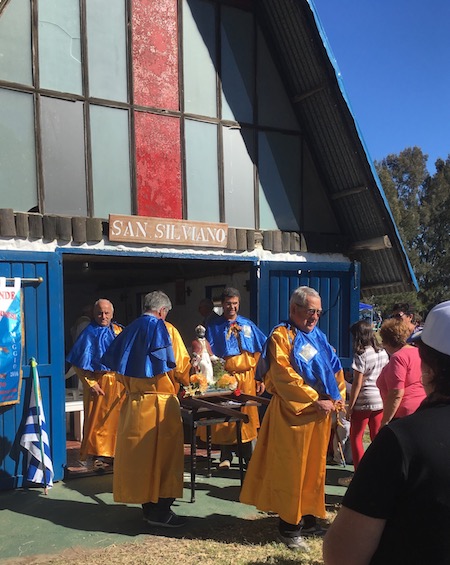 Things kicked off with the raising of the flags of Italy and Uruguay, and then the national anthem was sung, and the mass, which was standing room only, began. The priest told the story of San Silviano. He was a priest from North Africa who fled the Vandals and went to Italy, where he helped the farmers establish vineyards. His shrine in Solís de Mataojo, fittingly, stands on the edge of a grape field.

After the mass there was a very brief procession. The statue was carried on a litter, a few hundred yards up the road and back, accompanied by the clanging of a cast iron bell on a high pole in front of the little A-frame chapel. Javier told me that the procession of the religious statue is indigenous to South America: something the conquistadors brought back from Peru.

We repaired to Filipe’s house for lunch, which featured a weird kind of traditional steak that is cooked in its hide, with a thick layer of sub-dermal fat flavoring the meat. Traditionally, the hide (still hairy) is the plate, and you put a piece of bread in your hand to use as an oven mitt, but we used regular china. 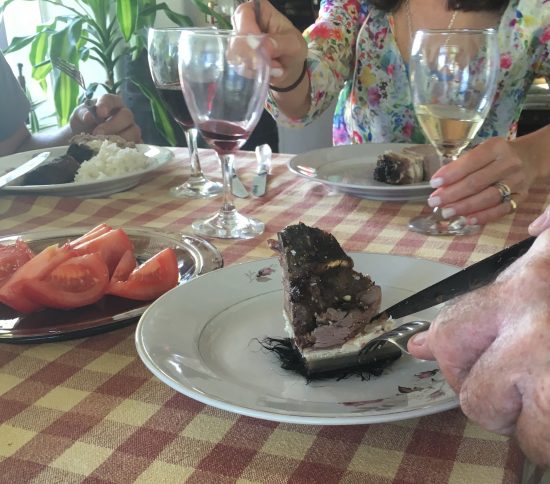 For dessert we had tart little guavas from a bush in the yard, and then we loafed around and drank coffee and watched the cousins playing soccer on a lawn dotted with little pink flowers. Then back to the festival.

There was a miniature version of a Little Italy carnival next to the chapel, with food stalls and a bandstand and even a midway game: a pyramid of cans at which young men were throwing tennis balls. A singer sang gaucho songs, and everyone ate tortas fritas, and then it was time to say goodbye to Valentina’s family.

What a spectacular day. We drove back to Montevideo in the last of the light, Javier and I jawing the whole way about narratives and identity and psychoanalysis, cargo cults, God, Gurdjieff, and Bruce Lee. Javier tried to explain Foucault to me, but I am too dumb still.