Part three of a series of posts adapted from a travel journal originally posted on apexart.org.

Montevideo is not a large city by worldwide standards. The population — around 1.5 million, half of Uruguay’s 3 million — probably ranks below three dozen Chinese cities I’ve never heard of, but to me it might as well be Shanghai. Or at least Buenos Aires. It’s an old colonial city far from its influences, where European ideas were set down and left to grow and settle, decay and regenerate and evolve. I don’t know what I expected, or how to explain what I’m finding. Everything looks familiar from a distance and less so on approach.

On Day 2 I went downtown, which in Montevideo is two places: Ciudad Vieja (the original walled city) and Centro—a grand shopping/commercial district flanking Av. 18 de Julio, the boulevard that descends from the sprawling Parque Batlle (of which I had a glimpse from the 121 bus on Day 1) to Plaza Independencia, where a colossal equestrian statue of General Artigas, “the father of Uruguayan nationhood,” guards Ciudad Vieja. Beneath Artigas the statue is a mausoleum containing the cremains of Artigas the man. Behind it is a fragment of the old wall, itself encased in cinderblocks. Beyond that is the old city, surrounded on three sides by the mighty Plata. 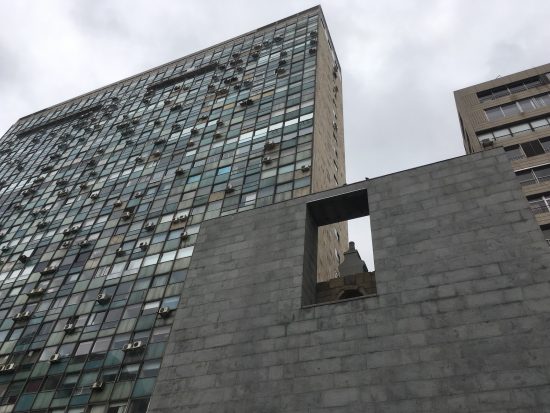 My first stop was the Centro Fotografia. I rode up and down on a birdcage elevator, and saw small but excellent selection of photos from the municipal archives—all scenes of Av. 18 de Julio. An 1865 photograph, taken from a curiously high angle, shows a wide dirt road dissecting a treeless plain. In 1895, at street level, it looks like Paris, or maybe Philadelphia, or any fashionable city: awnings, shop windows, lamp posts, blurry figures, trolley tracks, light shimmering off the pavement. In the 1930s some political calamity seems to have swept through—widening, deforesting, and depopulating the plazas and intersections.

I went outside and admired the avenue again. The weathered Belle Époque grandeur is there, improved by crumbling futurist department stores, and 1970s shopping arcades, which snake through the buildings and let out onto side streets. 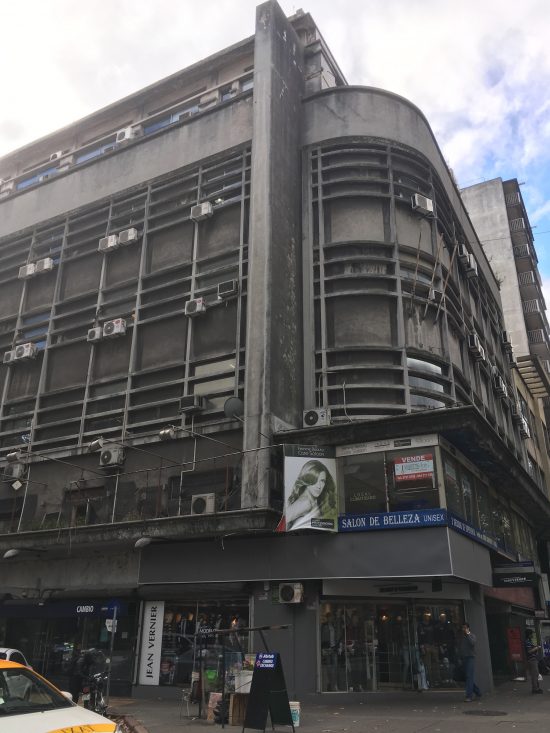 There is too much, way too much, to photograph. I’ve already loaded so many photos onto my apexart journal that it’s close to unusable, and Elizabeth has asked me to cut way back. Some of what I photographed in the first few days:

Shipping logs and charts at the city museum, as well as cast iron safes, blown glass globes, engraving after engraving of the Plata (there was an exhibit on the unsuccessful 1807 British invasion of the harbor), a paper diorama of the port, and 1,000 other things. If travel has taught me anything, it’s this: go to the city museum.

I took pictures of laundry hanging off balconies amid the crumblemiente, brutalism, old beauty, and spiffy tourist-friendly commerce of Ciudad Vieja.

Of parks, storefronts, warehouses, marquees, and odd-looking trees out the bus window.

Of medical-waste-themed costumes and reconstructions of elaborate papier-mâché 1930s stage sets at the Carnival museum.

Of Montevideo’s gringo gulch, a two-block-long tourist district near the Carnival museum, across a busy road from the pier where the occasional cruise ship docks. So far it’s the only place I’ve seen that caters specifically to European and American tourists. I attracted the attention of every maître d’ of every café I passed.

I took picture after picture of trophies in the football museum, and displays of furniture on which important FIFA documents were signed. The museum is housed (along with a grade school) in a building next to Estadio Centenario, which was built in 1930 to host the first World Cup.

I took a picture of a beam of wood used in the construction of the stadium; and of a piece of concrete, also used during construction. I was not the only person taking pictures of them.

I passed through a door in the gallery and found myself in a concession area, and then in the stadium itself. Uruguay, I’m learning, is beyond obsessed with football. Not being a football fan is one of the ways in which I feel most parochial. The sport leaves me cold, but I was all in with the vastness of this stadium, the blueness of the seats, the shallow rake of the stands, and the strange monolithic tower overhead. 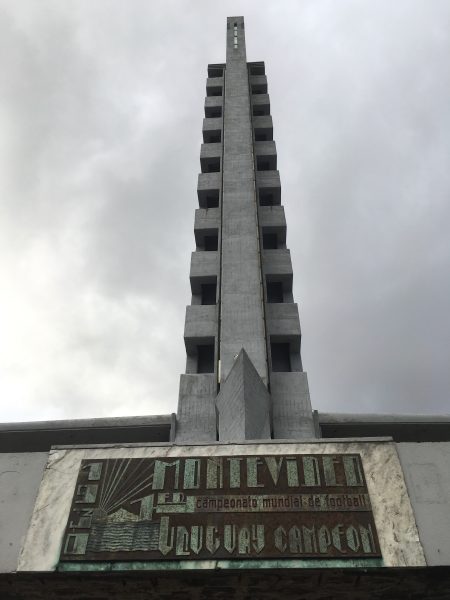 I thought of a pilgrimage I made to Tiger Stadium in Detroit in 1999, right before they tore it down. My boyfriend and I lingered in the parking lot after the game, getting the station wagon organized, and when we looked up, the coachline buses and hot dog vendors were gone. It had all vanished in the span of half an hour, leaving us alone and small in an abandoned wasteland.