Part two of a series of posts adapted from a travel journal originally posted on apexart.org.

The long Day 1 continued after a nap when Javier’s wife, Valentina, arrived to resume my orientation.

My building, it turns out, has a doorman — a funny little guy named Edgar with dyed hair and a maroon jacket.

Outside, the leaves on the locusts are yellowing. I’ve swapped a tentative New York spring for tender early fall. Valentina pointed out the produce stand across the street, and mentioned that her favorite pizza place is down the block. I’m skeptical. We walked up Av. 26 de Marzo to Av. Brasil, where we got a bus. The 121. “This will be a very good bus for you,” Valentina said. 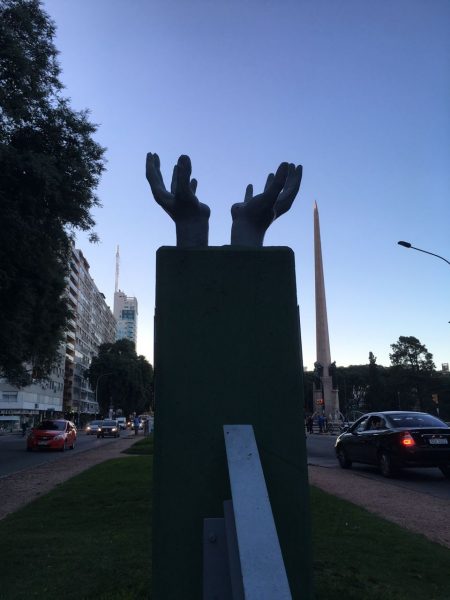 The patriotic street names, the wide boulevard, the statues, the blocky political graffiti on the walls in the civic interzone where I exchanged currency and purchased a multi-ride bus card… this place reminds me of some Warsaw Pact city from my youth.

From the 121 bus I saw people everywhere, sitting on walls and benches, enjoying travel cups of mate. I tried to get a photo of three nurses sipping from their fancy metal straws, but I was not quick enough. Later, in the supermarket, I discovered an entire aisle of mate supplies: cups, thermoses, packets of mate tea. The rest of the afternoon I spent wandering around my new neighborhood.

Yellow and blue dumpsters, tiny Fiat sedans and panel trucks, flowering succulents I hadn’t thought about since I left Los Angeles in 2005. Hardware stores and pharmacies behind in beaux-art doorways, tucked between mid-century apartment houses with gravel walks. The dominant style, though, is a kind of brutalist art deco. I came upon one after another cement house, photographing each balcony from multiple angles, until I gave in to the gathering surge of traveler’s love.

My timeless, borderless Day 1 in Montevideo ended with a screening at the local cinematheque. More art deco. Ringing, empty stairways and sparse lobby furnishings. I watched a movie about a haunted warehouse. The fact that it was in Spanish — which I don’t really understand, no matter how much I think I do — made it difficult to stay awake. I was half-dreaming on the walk back to the air b’n’b. I can think of it by no other name. It’s too insubstantial to count as a building, more app than architecture; a neutral corner.

I came upon a vision. 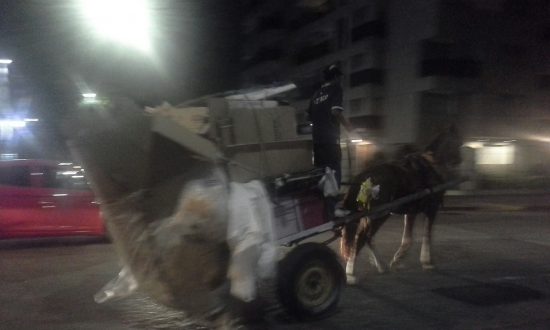 I’d left my camera (a sim-cardless iPhone) in the apartment when I left for the cinematheque, so this spirit photo was taken with the loaner Samsung.

N.b: I would see these horse-drawn carts again and again, usually driven by teenagers. They are collecting paper from the recycling bins, I am told. The rag-and-bone men of Montevideo.