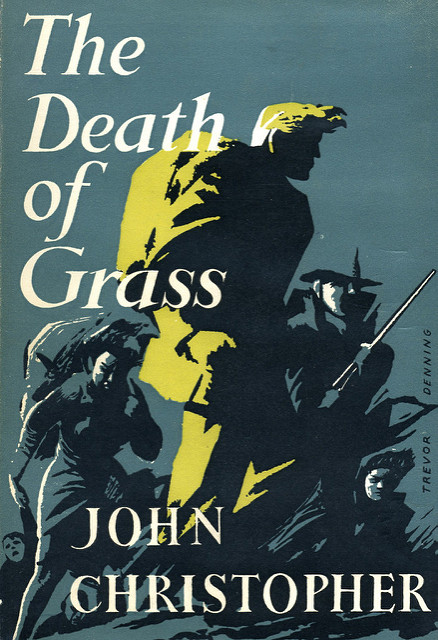 In this updating of J.J. Connington’s Radium Age eco-catastrophe Nordenholt’s Million, a plant virus infects the staple crops of West Asia and Europe such as wheat and barley — that is, all of the grasses. Which kills off the cattle, as well. At first, England prides itself on how well-disciplined its response to the crisis is, compared with that of Asian nations… but all too soon the British government resorts to martial law and mass executions, and then it’s anarchy. With their families in tow, John Custance and his friend, Roger Buckley, make their way across a brutal, chaotic England. They aim to reach the safety of John’s brother’s potato farm in an isolated northwestern valley — where they hope to survive on potatoes, beetroots and fresh water — and along the way, they gather an entourage of others seeking sanctuary. Day by day, however, the group’s civilized moral code decays. When they reach the heavily defended farm, and John’s brother won’t allow the whole group to stay there, what will they do?

Fun fact: John Christopher (Sam Youd)’s second novel; published in the United States the following year as No Blade of Grass. It was adapted, under that title, as a 1970 British-American science fiction movie directed by Cornel Wilde.