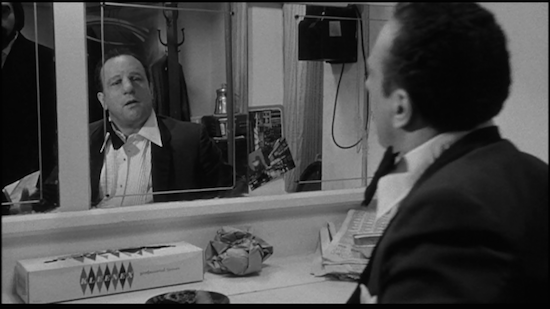 Everyone knows boxing is a cliche in movies, but when I came back from a class last week, slumped into the couch with two big bowls full of the kind of comfort food I normally can’t eat, appended for my various food allergies — quinoa elbow mac+cheese, vegan ice cream — and was inspired to turn on Raging Bull, I felt like another kind of cliche. I’m somewhat surprised boxing gyms aren’t full of curious weakling cinephiles like me.

It’s always boxing. Not Krav Maga movies. Not Taekwondo movies. Because boxing movies are always ultimately stories of class and capitalism. It’s overrepresented in film for how it’s represented in culture at large. I can name dozens of boxing films easily but struggle to count basketball movies on one hand. “Is it time for boxing movies to throw in the towel?” asks EW, which points out that if you said yes last year there would be no Creed.

While I like Raging Bull, I can’t quite appreciate it like After Hours and King of Comedy, or Mean Streets and Taxi Driver. I guess I just don’t really care all that much about what it means to be a man. So while the dramatic aspects — manliness, manhood, and being emotionally stunted because of societal expectations of a man or whatever — don’t quite resonate, I appreciate how beautiful it is, Thelma Schoonmaker’s extraordinary editing, and all the tiny details — the budget for old fashioned flashbulbs! — that pay off and keep it from feeling like just another boxing movie. But after class, at which I was completely uncoordinated, I had a new appreciation for it, recognizing where his arms were going, “oh, that’s a 2 and a 3.”