Sometimes I drag my feet about writing these newsletters. In a complicated world of trauma, exploitation, and strife, who even cares what I watched on Netflix this week? But of course part of the reason we turn to art is to recharge our batteries. If you need a distraction, a couple of hours away from world’s daily horrors, you could do no worse than the Jem and the Holograms movie. 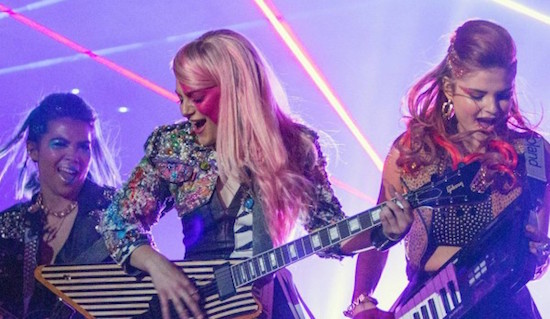 It was my favorite cartoon when I was five. I followed news about the production with interest but by the time it hit theaters I just… didn’t care enough to go see it. It had 18% on Rotten Tomatoes and the general response wasn’t that it was corny, but that it was boring. So I was surprised how much I enjoyed it.

While imperfect, Jem and the Holograms has some atmospheric qualities that might have escaped a more polished film. It is the best film I’ve seen about internet fame, online identity, and selfie culture. Of course, it’s pretty much the only film I’ve seen directly addressing digital culture and identity this way. And that’s important. In twenty or thirty years, we might want to revisit this film for its design elements — Google Map pins, social network interfaces — and general vibe to it. It will look really dated soon. That is good. We can think of this film as a time capsule too early to appreciate — mundane to the present, likely eye-opening to viewers in the future. It’s what 2015 looked like through the film equivalent of a Facetune filter.

It was made on a tight budget of $5 million and often plays like a student film with a formulaic story. I am assuming an entire subplot or character was cut and replaced with footage; that was a curious decision, but ultimately it worked. What feels like a quarter of the film is YouTube fan footage. Actual fan footage — and I hope they were paid something — that perhaps a PA spent all of three days tracking down. It’s Youtube monologues from fans of Jem. They are talking about the ’80s cartoon and usually have a t-shirt or poster with the original logo in the picture, but the conversation still fits for the main character of this film (“Jem gave me the confidence to follow my dreams… blah blah…”) The disjuncture between the yearning and poor picture quality of those videos and this film really works and I’m sure a dozen or so grad student papers on simulacra and authenticity have already been written about it by now.

None of the young actors were very charismatic. I kept wishing for better music. Like Haim or something. But that would be a budget too big for this one and we’d miss all the Youtube footage. Juliette Lewis and Molly Ringwald were wonderful. And great cameos from Britta Phillips (original voice of Jem) and the cartoon creator Christy Marx, and as Kesha as Pizazz(!). It would have made a better tv series because the story is secondary to the vibe. One scene I loved — the electricity goes out and Jem calls for the crowd to light the stage with their phones: 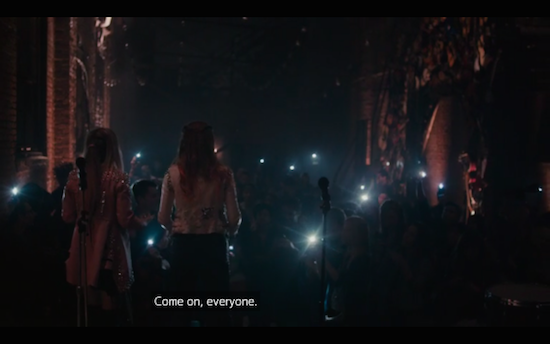 I have a soft spot for any movie about the trials of the lives of young starlets. Some films of this kind are actually good. Beyond the Lights is one of the finest dramas made in years. I haven’t seen Neon Demon yet but get the feeling that for this reason I’ll find it hard to resist. Loved The Bling Ring, and this film reminded me of it. Teens in LA following their dreams.

Maybe because I’ve never lived there, and maybe because I’m thinking about moving there now, while I have yet to have lived anywhere west of Chicago, but when I see movies — even ones I don’t particularly like — Shopgirl, Swingers —showcasing the city lovingly, I always get swept away. I never felt this way about say, Annie Hall. With Ghostbusters or Rosemary’s Baby, I get the feeling in reverse: love for the city because it’s the setting for these classic movies. And when I watch something like Basquiat, I get bitter about the long gentrified-away New York that I was denied.