Pulp Fiction was the first R-rated movie I saw in a theater. My mom drove me to the movie theater. Two years prior to it, if you asked me what my favorite movie was I might have said My Girl. The movies that made a mark on me before it were NeverEnding Story, which I wore out on VHS, and a film with a strange name my parents took me to one wintery night. I knew nothing about it until the lights came on in the theater. Edward Scissorhands. But in the tween years I felt I had outgrown fantasy and fairy tales and my attempts to relate to the culture marketed as adult and smart — Merchant Ivory kind of stuff — just meant shelves of books and video rentals that ultimately were unsatisfying.

It was hyped up in the annual Entertainment Weekly fall movies issue that introduced me to filmmakers like Kimberly Peirce, Richard Linklater, Karyn Kusama, Todd Haynes, Paul Thomas Anderson, and Daisy von Scherler Meyer. (All those women now direct episodes of Halt and Catch Fire, which, for as much as love that show, says everything about who benefited from ’90s indie film scene.) Very soon I would stop by the video store on my walk home from school to pick up things like The Double Life of Veronique. But it all started with Pulp Fiction. Because it made a mark on me I built my identity around it in tribute. I wore black bell bottoms and a white button down shirt. I bobbed my hair. I didn’t look cool. Grunge was cool. Or Clueless juniors department plaid mini skirts were cool. But I knew it was a look and it was a uniform for what I was learning to appreciate.

I didn’t know the history yet but I understood the film was responding to history somehow. It did what a few years later Mars Attacks! could not do and that was it lead me to the material that was remixed. B-movie trash bin stuff made filmmaking seem more accessible, less rarified, less pristine. After all Quentin Tarantino “didn’t go to film school.” He “went to films,” as he would say in just about every interview. His enthusiasm for the vitality of the screen invites his fans to learn more about film, and in the process even kill their own fandom.

Quentin Tarantino was born two decades too early to be the best movie blogger there ever was. I don’t mean that as a knock. He could be a better blogger than a filmmaker. He makes films as film criticism and I wonder how it would look if he used the internet to shape his imagination. It is a shame he’s so resistant to it because if he released his movies with interactive Rap Genius-style annotation it might improve them.

The movies play better when you have one eye on Wikipedia checking out what on the screen is referencing what. The films are short on emotion and apolitical. He isn’t thoughtful. The scripts are controlled because his creativity isn’t expansive. He can manipulate audience expectations but never earns any emotional payoffs. All of his films were windup to the Inglourious Basterds finish: burning down a cinema. That he earned. He never earns the nwords. His characters are either stupid or cagey, which is different than smart.

I figured Hateful Eight would be 48 Laws of Power in the snow with people saying “Well I’ll be goddammed” a lot and planned to skip it. It is that but I’m glad I didn’t. First of all Jennifer Jason Leigh is in it. Look at her past work. Coen brothers’ Hudsucker Proxy, David Cronenberg’s eXistenZ, Robert Altman’s Short Cuts. These aren’t the directors’ biggest hits but they say a lot about their style and interests. She was even in a small part in Eyes Wide Shut but Kubrick wasn’t happy with the footage. Due to a schedule conflict with eXistenZ, the part was recast. 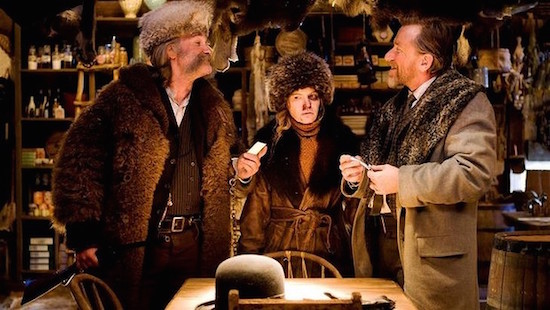 Hateful Eight is to Tarantino what EXistenZ is to Cronenberg. It is the best he’s made since Jackie Brown. It is structured and paced right. In one room he can focus on his strength — casting actors — their blocking, their chemistry, the clip of the dialogue. It is a bunch of weaselly idiots in a room with some Agatha Christie inspired whodunnit tension. Jennifer Jason Leigh walks away with the picture. Women don’t get to play weaselly idiots. Yes, she gets hit and it’s unsettling when the audience laughs a little too hard. Trapped in a single room like Reservoir Dogs, it has none of the false notes like how Django Unchained manipulated landscapes, music, history, emotions — thinking of the escape scene in particular, but really the whole film — without earning it. I’d just as well forget that movie but this piece by Jelani Cobb was great. So many of the tricks in Pulp Fiction have been repurposed in other films that have come since but watching it for the first time in twenty years, I found myself wishing the final scene in the restaurant were its own movie. Hateful Eight does that with Amanda Plummer swapped out for Leigh and a handful more baddies.

The other reason I went to see it is I listened to a Director’s Guild podcast conversation between Tarantino and Christopher Nolan and was fascinated by the part toward the end of their discussion where he talks about inspiration for the film. Not just The Great Silence and The Thing. He was thinking of “guest stars” on episodes of ’60s TV westerns like Bonanza and The Virginian. People like William Shatner, Charles Bronson, Robert Culp, or Vic Morrow. 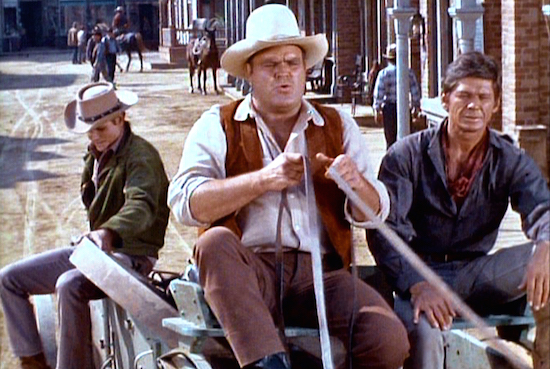 The thing that was interesting about these guest stars is there would always be an unknown quality about them. At some point in the first act you would learn something about their past. They had an interesting, shady, or controversial past and you didn’t know how true the story was or not true. Usually it was a situation that the whole second act of the story was: are they a protagonist or are they an antagonist? Is Michael Landon going end up being his friend by the end and helping him or is Michael Landon going to end up killing him because he’s a bad guy? That concept of a character became very interesting to me. And I thought about what if I could take eight of those characters and trap them in a room during a three day blizzard…they have to deal with each other. They all have a backstory. And we can’t trust a thing they say…There is no Michael Landon. There is no moral center. There is no hero that you can gravitate toward. There are only these guest stars.

George C. Scott had some really difficult experiences with the director. George was headstrong by nature. It is what fueled his particular talent. Stanley was very much the same kind of man. The irresistible force met the immovable object when Stanley asked George to do over-the-top performances of his lines. He said it would help George to warm up for his satiric takes. George hated this idea. He said it was unprofessional and made him feel silly. George eventually agreed to do his scenes over-the-top when Stanley promised that his performance would never be seen by anyone but himself and the cast and crew. But Kubrick ultimately used many of these “warm-ups” in the final cut. George felt used and manipulated by Stanley and swore he would never work with him again.

Dr. Strangelove is a masterpiece. Hateful Eight is snappy homage to other films. There’s room in our hard drives or projection booths for both. I don’t watch many westerns. I haven’t even seen a proper spaghetti western or any of these shows about the frontier. But when I went home, I looked up Bonanza. This is something I never in my life would guess I would want to watch. I looked up The Great Silence and watched the trailer. Maybe the way to measure the quality of a Quentin Tarantino film is in number of search strings after watching.

About the time I discovered Pulp Fiction, I came across Reel Wild Cinema late at night on TV. The Little Red Riding Hood segment in this episode was on my TV. It was a show on USA with Sandra Bernhard introducing movies like Elvira. Not quite like MST3K because this show saves the laughter for when the picture is over. You can make up your own jokes or take the time to appreciate that somehow, somewhere a director rounded up a cast and crew and made this thing. A bunch of episodes are now on YouTube.