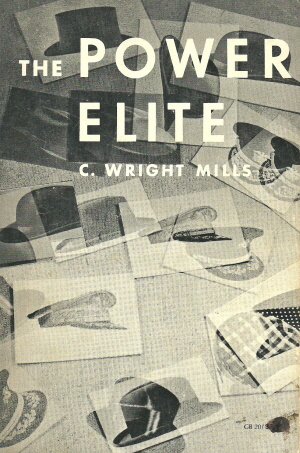 Pragmatist sociologist C. WRIGHT MILLS (1916–62) was a consummate outsider, a combative Texas-born intellectual and activist who could not be bought. In a 1957 essay he happily labelled himself a Wobbly, identifying with the then-unfashionable Industrial Workers of the World (founded 1905). “A Wobbly is not only a man who takes orders from himself,” he wrote. “He doesn’t like bosses — capitalistic or communistic — they are all the same to him. He wants to be, and he wants everyone else to be, his own boss at all times under all conditions and for any purposes.” Here, Emerson meets Marx in a special brand of independent, indigestible American thought. Mills wrote widely and with influence, updating Weberian structural analysis for the age of the military-industrial complex. White Collar (1951), The Power Elite (1956), and The Sociological Imagination (1959) sketch the contours of the new work idea and class system of allegedly classless post-war America. As a journalist he was prolific, a regular in The New Republic and Dwight Macdonald’s Politics. His take-no-prisoners style extended into personal life, leaving three marriages and various children and affairs. He survived several heart attacks until the one he didn’t.

On his or her birthday, HiLobrow irregularly pays tribute to one of our high-, low-, no-, or hilobrow heroes. Also born this date: Edward Burne-Jones, Morris Graves, Jack Kirby, George W.S. Trow, Donald Evans, Bernard Wolfe.