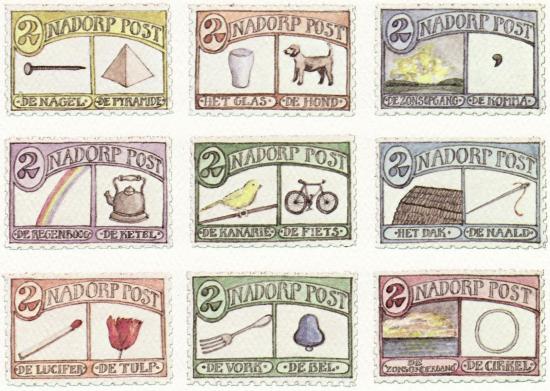 William Blake wrote of seeing a whole world in a grain of sand but the miniscule watercolor canvases of DONALD EVANS (1945–77) brought an entire atlas into being. His postage stamps arrived from forty-two countries, issuing entry visas to imaginary lands — Nadorp, Mangiare, Sabot, Yteke, Adjudani, the Tropides Islands. Each and every square (or sometimes triangle) is an adventure in itself. They evoke both the nostalgic and the nomadic. Wondrously playful, these artifacts from his far-flung realms depict animals, plants, airships, minarets, and windmills. They teem with sly references to Evans’s life and obsessions while also commenting on the iconography of travel. He kept track of the stamps along with climates, customs, and currencies in a private dossier he called Catalogue of the World. After studying architecture and working as a renderer, he revived his teenage interest in stamp collecting and fabricated his own collectibles. Although he knew mail art figures like Ray Johnson, he was a school of one. In 1972, he left the United States to live in the Netherlands — and his unmappable countries. “It’s vicarious traveling for me,” Evans told The Paris Review, “to a made-up world that I like better than the one that I’m in.” Admired by travel writer Bruce Chatwin and Griffin & Sabine author-artist Nick Bantock and commemorated in poems by Robert Farnsworth and Robin Becker, Evans’s fastidious philatelic creations bring to mind the details that fill out Wes Anderson’s films. Evans’s topography was still expanding when the artist perished in a fire at 31.

“Designs in connection with postage stamps and coinage may be described, I think,” wrote W.B. Yeats, “as the silent ambassadors on national taste.” There has never been an artistic ambassador like Donald Evans.

On his or her birthday, HiLobrow irregularly pays tribute to one of our high-, low-, no-, or hilobrow heroes. Also born this date: Morris Graves, Jack Kirby, Edward Burne-Jones.