“More poet than architect,” wrote Frederick Stallknecht Wight about artist MORRIS GRAVES (1910-2001), “which sets him apart from most of the painters of his time.” Raised mostly in Seattle and largely self-taught, Graves quit high school for the Merchant Marine, traveled to Japan and China, then completed school in Beaumont, Texas. Returning to the northwest, Graves’ study of Zen and his relationship with Mark Tobey, whose own work was transformed by the study of Chinese calligraphy, proved crucial, offering philosophical and technical settings for Graves’ uniquely symbolic nature visions. By the late 1930s, Graves had his first solo exhibition and become friends with then-fellow Seattleite John Cage, who’d write of the artist often, including the astonishing essay/text piece “Series Re: Morris Graves” (1973). Museum of Modern Art shows in 1940 and 1942 assured Graves’ success, if not his freedom: although a conscientious objector, Graves was drafted and would spend nearly a year in the stockade before the Army realized its mistake. Home again, Graves continued earning ardent fans both well and lesser known: Hobson’s Choice star Charles Laughton purchased many pieces, while poet Kenneth Rexroth bought a 1943 tempera on paper work he especially loved. “Waning Moon (below) passes out of the realm of ordinary painting altogether and can be compared only with the ominous, cryptic characters which Shingon monks write on six-foot sheets of paper while in trance.” 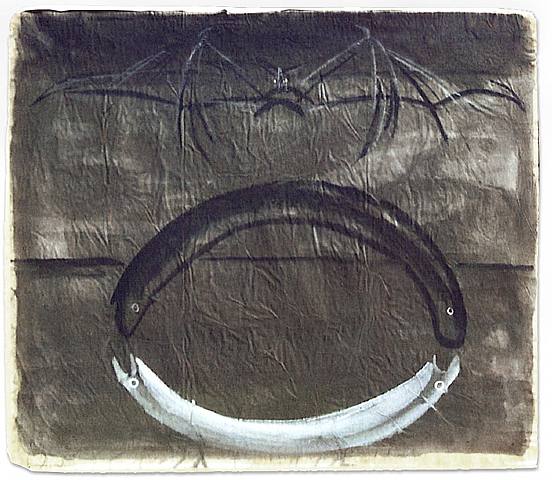 On his or her birthday, HiLobrow irregularly pays tribute to one of our high-, low-, no-, or hilobrow heroes. Also born this date: Jack Kirby.