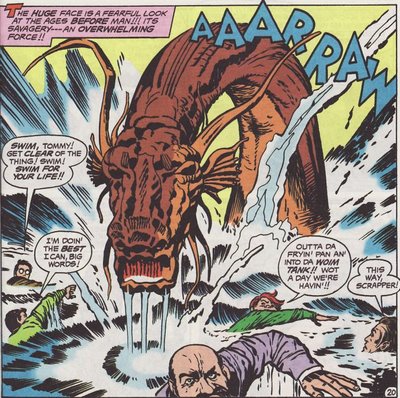 The dense, blocky dynamism of his Fourth World art, as inked by Mike Royer. The narrative build leading to the heartbreak on Ben Grimm’s face as Reed Richards forced him to transform back into The Thing in Fantastic Four #40. Kamandi’s Jackie Kennedy-esque bouffant flip. The photo montages he used when depicting the Negative Zone. Stealing The Demon’s face from a panel in Hal Foster’s Prince Valiant. The epic backgrounds in Tales of Asgard. The “Mother Delilah” story in Boy’s Ranch #3. Fin Fang Foom! These are some things I particularly love about the work of JACK KIRBY (1917-94). All of which barely hints at his genius. His achievement is so vast that inventing the genre of romance comics is just a footnote in his career. I don’t rate the King with his handful of comics peers (Tezuka, Hergé, Barks, Eisner, Crumb). Why? Because he was the James Brown of comics: insanely prolific, unbelievably vital, formally inventive, forever influential. Kirby was superbad.

On his or her birthday, HiLobrow irregularly pays tribute to one of our high-, low-, no-, or hilobrow heroes. Also born this date: | Edward Burne-Jones | Donald Evans | Morris Graves |