HILOBROW is pleased to present the second installment of our serialization of Sax Rohmer’s story “The Zayat Kiss.” New installments will appear each Wednesday for six weeks.

“What’s this?” muttered my friend hoarsely.

Constables were moving on a little crowd of carious idlers who pressed about the steps of Sir Crichton Davy’s house and sought to peer in at the open door. Without waiting for the cab to draw up to the curb, Nayland Smith recklessly leaped out, and I followed closely at his heels.

“What has happened?” he demanded breathlessly of a constable.

The latter glanced at him doubtfully, but something in his voice and bearing commanded respect.

Smith lurched back as though he had received a physical blow, and clutched my shoulder convulsively. Beneath the heavy tan his face had blanched, and his eyes were set in a stare of horror.

With clenched fists he turned and, pressing through the group of loungers, bounded up the steps. In the hall a man who unmistakably was a Scotland Yard official stood talking to a footman. Other members of the household were moving about, more or less aimlessly, and the chilly hand of, King Fear had touched one and all, for, as they came and went, they glanced ever over their shoulders, as if each shadow cloaked a menace, and listened, as it seemed, for some sound which they dreaded to hear. 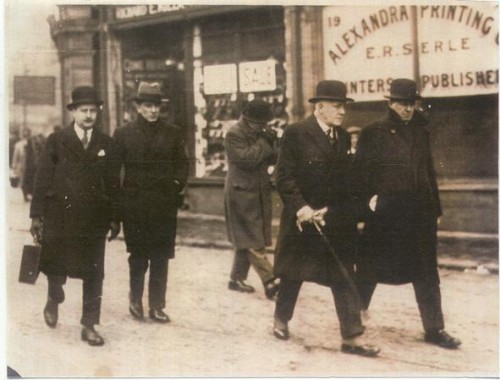 Smith strode up to the detective and showed him a card, upon glancing at which the Scotland Yard man said something in a low voice, and, nodding, touched his hat to Smith in a respectful manner.

A few brief questions and answers, and, in gloomy silence, we followed the detective up the heavily carpeted stair, along a corridor lined with pictures and busts, and into a large library. A group of people were in this room, and one, in whom I recognized Chalmers Cleeve of Harley Street, was bending over a motionless form stretched upon a couch. Another door communicated with a small study, and through the opening I could see a man on all fours examining the carpet. The uncomfortable sense of hush, the group about the physician, the bizarre figure crawling, beetlelike, across the inner room, and the grim hub, around which all this ominous activity turned, made up a scene that etched itself indelibly on my mind.

As we entered. Dr. Cleeve straightened himself, frowning thoughtfully.

“Frankly, I do not care to venture any opinion at present regarding the immediate cause of death,” he said. “Sir Crichton was addicted to cocaine, but there are indications which are not in accordance with cocaine poisoning. I fear that only a post-mortem can establish the facts — if,” he added, “we ever arrive at them. A most mysterious case!”

Smith stepping forward and engaging the famous pathologist in conversation, I seized the opportunity to examine Sir Crichton’s body.

The dead man was in evening dress, but wore an old smoking jacket. He had been of spare but hardy build, with thin, aquiline features, which now were oddly puffy, as were his clenched hands. I pushed back his sleeve and saw the marks of the hypodermic syringe upon his left arm. Quite mechanically I turned my attention to the right arm. It was unscarred, but on the back of the hand was a faint red mark, not unlike the imprint of painted lips. I examined it closely, and even tried to rub it off, but it evidently was caused by some morbid process of local inflammation if it were not a birthmark. 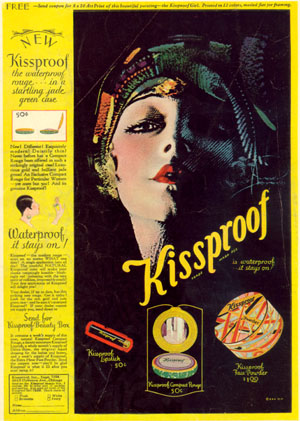 Turning to a pale young man whom I had understood to be Sir Crichton’s private secretary, I drew his attention to this mark and inquired if it were constitutional.

“It is not, sir,” answered Dr. Cleeve, overhearing my question. “I have already made that inquiry. Does it suggest anything to your mind? I must confess that it afforded me no assistance.”

“Excuse me, Mr. Burboyne,” said Smith, now turning to the secretary, “but Inspector Weymouth will tell you that I act with authority. I understand that Sir Crichton was — seized with illness in his study?”

“Yes, at half-past ten. I was working here in the library and he inside, as was our custom.”

“The communicating door was kept closed?”

“Yes, always. It was open for a minute or less about ten-twenty-five, when a message came for Sir Crichton. I took it in to him, and he then seemed in his usual health.”

“What was the message?”

“I could not say. It was brought by a district messenger, and he placed it beside him on the table. It is there now, no doubt.”

“Sir Crichton suddenly burst open the door and threw himself, with a scream, into the library. I ran to him, but he waved me back. His eyes were glaring horribly. I had just reached his side when he fell, writhing, upon the floor. He seemed past speech, but as I raised him and laid him upon the couch he gasped something that sounded like ‘The red hand!’ Before I could get to the bell or telephone he was dead!”

Mr. Burboyne’s voice shook as he spoke the words, and Smith seemed to find this evidence confusing.

“You do not think he referred to the mark on his hand?”

“I think not. From the direction of his last glance I feel sure he referred to something in the study.”

“Having summoned the servants, I ran into the study. But there was nothing unusual to be seen. The windows were closed and fastened. He worked with closed windows in the hottest weather. There is no other door, for the study occupies the end of a narrow wing, so that no one could possibly have gained access to it while I was in the library unseen by me. Had some one concealed himself in the study earlier in the evening — and I am convinced that it offers no hiding place — he could only have come out again by passing through here.”

Nayland Smith tugged at the lobe of his left ear, as was his habit when meditating.

“You had been at work here in this way for some time?”

“Had anything unusual occurred prior to this evening?”

“Yes,” said Mr. Burboyne with evident perplexity, “though I attached no importance to it at the time. Three nights ago Sir Crichton came out to me and appeared very nervous; but at times his nerves — you know? Well, on this occasion he asked me to search the study. He had an idea that something was concealed there.”

“Something or some one?”

“‘Something’ was the word he used. I searched, but fruitlessly, and he seemed quite satisfied and returned to his work.”

“Thank you, Mr. Burboyne. My friend and I would like a few minutes’ private investigation in the study.”