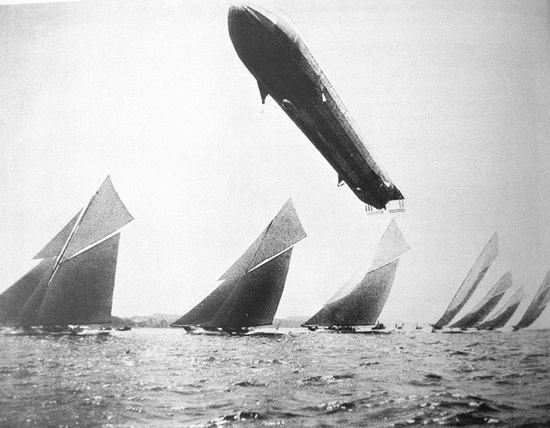 HILOBROW is pleased to present the sixth installment of our serialization of Rudyard Kipling’s With the Night Mail (and his follow-up story, “As Easy as A.B.C.”). New installments will appear each Wednesday for 12 weeks.

With the Night Mail follows the exploits of an intercontinental mail dirigible battling the perfect storm. Between London and Quebec we learn that a planet-wide Aerial Board of Control (A.B.C.) now enforces a technocratic system of command and control not only in the skies but in world affairs, too. A follow-up story, “As Easy As A.B.C.,” recounts what happens when agitators in Chicago demand a return of democracy: The A.B.C. sends zeppelins armed with sound weapons to subdue not the agitators, but a mob who would destroy them! With the Night Mail is set in 2000, and it first appeared in 1905; 2012 marks the centennial of the first publication of “As Easy As A.B.C.”

In June, HiLoBooks will publish a beautiful new edition of With the Night Mail (and “As Easy as A.B.C.”), checked against the 1909 first published edition (Doubleday), with an Introduction by science fiction author Matthew De Abaitua, and an Afterword by science fiction author Bruce Sterling. SUPPLIES ARE LIMITED! CLICK HERE TO ORDER YOUR COPY.
SUBSCRIBE to HILOBROW’s serialized fiction via RSS.

LAST WEEK: “ALDEBARAN—War, as a paying concern, ceased in 1967. (2) The Convention of London expressly reserves to every nation the right of waging war so long as it does not interfere with the world’s traffic. (3) The A. B. C. was constituted in 1949.”

Ten years ago Lavalle, “that imperturbable dreamer of the heavens,” as Lazareff hailed him, gathered together the fruits of a lifetime’s labour, and gave it, with well-justified contempt, to a world bound hand and foot to Barald’s Theory of Vertices and “compensating electric nodes.” “They shall see,” he wrote — in that immortal postscript to “The Heart of the Cyclone”—”the Laws whose existence they derided written in fire beneath them.”

“But even here,” he continues, “there is no finality. Better a thousand times my conclusions should be discredited than that my dead name should lie across the threshold of the temple of Science — a bar to further inquiry.”

So died Lavalle — a prince of the Powers of the Air, and even at his funeral Céllier jested at “him who had gone to discover the secrets of the Aurora Borealis.” 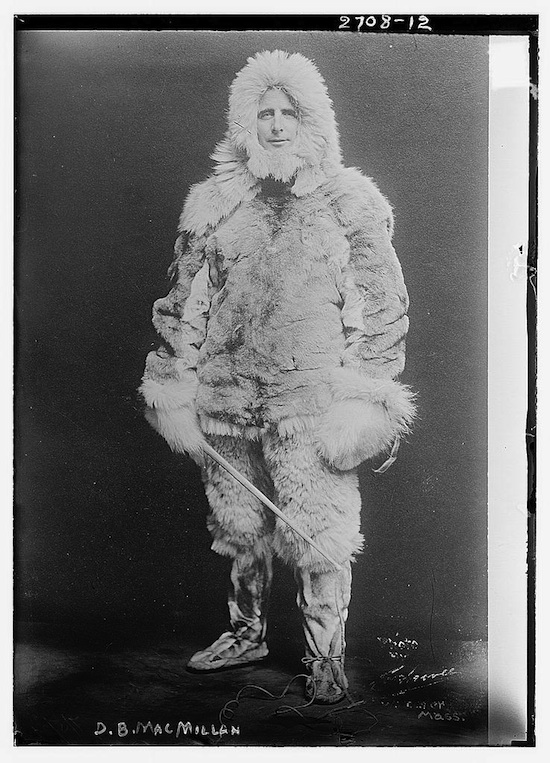 If I choose thus to be banal, it is only to remind you that Céllier’s theories are to-day as exploded as the ludicrous deductions of the Spanish school. In the place of their fugitive and warring dreams we have, definitely, Lavalle’s Law of the Cyclone which he surprised in darkness and cold at the foot of the overarching throne of the Aurora Borealis. It is there that I, intent on my own investigations, have passed and re-passed a hundred times the worn leonine face, white as the snow beneath him, furrowed with wrinkles like the seams and gashes upon the North Cape; the nervous hand, integrally a part of the mechanism of his flighter; and above all, the wonderful lambent eyes turned to the zenith.

“Master,” I would cry as I moved respectfully beneath him, “what is it you seek to-day?” and always the answer, clear and without doubt, from above: “The old secret, my son!”

The immense egotism of youth forced me on my own path, but (cry of the human always!) had I known — if I had known —I would many times have bartered my poor laurels for the privilege, such as Tinsley and Herrera possess, of having aided him in his monumental researches.

It is to the filial piety of Victor Lavalle that we owe the two volumes consecrated to the ground-life of his father, so full of the holy intimacies of the domestic hearth. Once returned from the abysms of the utter North to that little house upon the outskirts of Meudon, it was not the philosopher, the daring observer, the man of iron energy that imposed himself on his family, but a fat and even plaintive jester, a farceur incarnate and kindly, the co-equal of his children, and, it must be written, not seldom the comic despair of Madame Lavalle, who, as she writes five years after the marriage, to her venerable mother, found “in this unequalled intellect whose name I bear the abandon of a large and very untidy boy.” Here is her letter:

“Xavier returned from I do not know where at midnight, absorbed in calculations on the eternal question of his Aurora —la belle Aurore, whom I begin to hate. Instead of anchoring —I had set out the guide-light above our roof, so he had but to descend and fasten the plane — he wandered, profoundly distracted, above the town with his anchor down! Figure to yourself, dear mother, it is the roof of the mayor’s house that the grapnel first engages! That I do not regret, for the mayor’s wife and I are not sympathetic; but when Xavier uproots my pet araucaria and bears it across the garden into the conservatory I protest at the top of my voice. Little Victor in his night-clothes runs to the window, enormously amused at the parabolic flight without reason, for it is too dark to see the grapnel, of my prized tree. The Mayor of Meudon thunders at our door in the name of the Law, demanding, I suppose, my husband’s head. Here is the conversation through the megaphone —Xavier is two hundred feet above us.

“‘Xavier Lavalle, in the name of the Law, descend and submit to process for outrage of domicile.’

“Xavier, roused from his calculations, only comprehending the last words: ‘Outrage of domicile? My dear mayor, who is the man that has corrupted thy Julie?’

“Xavier, interrupting: ‘I have not that felicity. I am only a dealer in cyclones!’

“My faith, he raised one then! All Meudon attended in the streets, and my Xavier, after a long time comprehending what he had done, excused himself in a thousand apologies. At last the reconciliation was effected in our house over a supper at two in the morning —Julie in a wonderful costume of compromises, and I have her and the mayor pacified in beds in the blue room.” 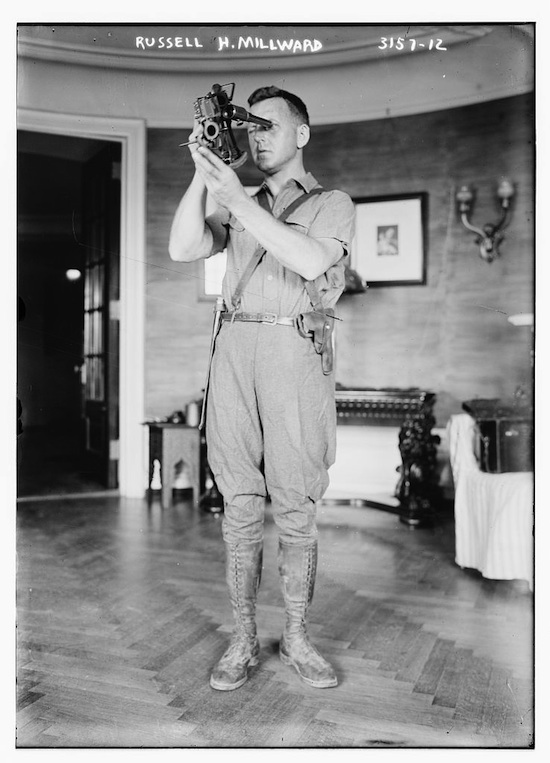 And on the next day, while the mayor rebuilds his roof, her Xavier departs anew for the Aurora Borealis, there to commence his life’s work. M. Victor Lavalle tells us of that historic collision (en plane) on the flank of Hecla between Herrera, then a pillar of the Spanish school, and the man destined to confute his theories and lead him intellectually captive. Even through the years, the immense laugh of Lavalle as he sustains the Spaniard’s wrecked plane, and cries: “Courage! I shall not fall till I have found Truth, and I hold you fast!” rings like the call of trumpets. This is that Lavalle whom the world, immersed in speculations of immediate gain, did not know nor suspect — the Lavalle whom they adjudged to the last a pedant and a theorist.

The human, as apart from the scientific, side (developed in his own volumes) of his epoch-making discoveries is marked with a simplicity, clarity, and good sense beyond praise. I would specially refer such as doubt the sustaining influence of ancestral faith upon character and will to the eleventh and nineteenth chapters, in which are contained the opening and consummation of the Tellurionical Records extending over nine years. Of their tremendous significance be sure that the modest house at Meudon knew as little as that the Records would one day be the world’s standard in all official meteorology. It was enough for them that their Xavier — this son, this father, this husband — ascended periodically to commune with powers, it might be angelic, beyond their comprehension, and that they united daily in prayers for his safety.

“Pray for me,” he says upon the eve of each of his excursions, and returning, with an equal simplicity, he renders thanks “after supper in the little room where he kept his barometers.”

To the last Lavalle was a Catholic of the old school, accepting — he who had looked into the very heart of the lightnings — the dogmas of papal infallibility, of absolution, of confession — of relics great and small. Marvellous — enviable contradiction!

The completion of the Tellurionical Records closed what Lavalle himself was pleased to call the theoretical side of his labours — labours from which the youngest and least impressionable planeur might well have shrunk. He had traced through cold and heat, across the deeps of the oceans, with instruments of his own invention, over the inhospitable heart of the polar ice and the sterile visage of the deserts, league by league, patiently, unweariedly, remorselessly, from their ever-shifting cradle under the magnetic pole to their exalted death-bed in the utmost ether of the upper atmosphere — each one of the Isoconical Tellurions —Lavalle’s Curves, as we call them to-day. He had disentangled the nodes of their intersections, assigning to each its regulated period of flux and reflux. Thus equipped, he summons Herrera and Tinsley, his pupils, to the final demonstration as calmly as though he were ordering his flighter for some midday journey to Marseilles.

“I have proved my thesis,” he writes. “It remains now only that you should witness the proof. We go to Manila to-morrow. A cyclone will form off the Pescadores S. 17 E. in four days, and will reach its maximum intensity in twenty-seven hours after inception. It is there I will show you the Truth.”

A letter heretofore unpublished from Herrera to Madame Lavalle tells us how the Master’s prophecy was verified.

NEXT WEEK: “(ADVERTISING SECTION — MISCELLANEOUS — WANTS). Family dirigible. A competent, steady man wanted for slow speed, low level Tangye dirigible. No night work, no sea trips. Must be member of the Church of England, and make himself useful in the garden. M. R., The Rectory, Gray’s Barton, Wilts.”

READ: You are reading Rudyard Kipling’s With the Night Mail and “As Easy As A.B.C.” Also read our serialization of: Jack London’s The Scarlet Plague | H. Rider Haggard’s When The World Shook

See All Posts by Rudyard Kipling

Rudyard Kipling was an English poet, prophet of British imperialism, and author of such immortal novels and stories as The Jungle Book, Kim, Just So Stories, and “The Man Who Would Be King.” He also wrote Radium Age science fiction. In June, HiLoBooks will publish a beautiful new edition of With the Night Mail and "As Easy as A.B.C." (click here to order).