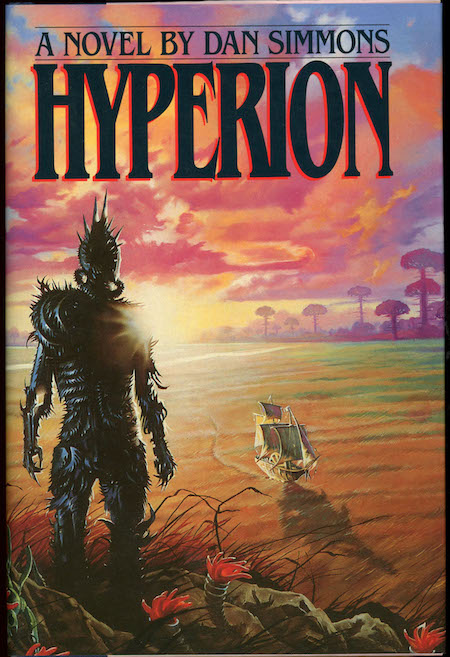 Chaucer’s Canterbury Tales is a collection of stories — told by a disparate group of pilgrims — within a frame story, the overall effect of which is to paint a sardonic portrait of 14th-century English society. This 29th-century Chaucerian space opera gives us a priest, a soldier, a poet, a scholar, and other pilgrims chosen by the Shrike Church and the Hegemony of Man (which rules some 200 human-inhabited planets) to make a request of the so-called Shrike, a deadly half-mechanical, half-organic creature that can control the flow of time. As they progress in their journey, away from their home planets (simulacra of ancient Earth societies and cultures) towards the remote, titular planet Hyperion, where the mysterious Shrike dwells, we learn — via the pilgrims’ stories — that the Ousters, a faction of humanity mutated by centuries of living in deep space, plans to invade Hyperion… and that Hyperion’s enormous, provocatively empty Time Tombs are about to finally reveal their secrets. Earth has reportedly been destroyed; the Hegemony’s technology (strikingly, readily available teleportation devices) comes from a secretive civilization of self-aware AIs, who inhabit a cyberspace-esque realm that is divided into warring factions. There’s a legend suggesting that all but one of a group of pilgrims to the Shrike will be horribly killed, and the other granted one wish; why has this group of individuals been selected for this mission? It’s a metatextual novel: The astute reader will pick up allusions to everything from Shakespeare to The Long Goodbye and The Wizard of Oz, and of course to other sci-fi novels. And it’s a literary work, too: Each novella mashes up genres, from the detective story and horror to action-packed combat, even romance. Phew!

Fun facts: Winner of the Hugo and Locus Awards. The next book in the series was The Fall of Hyperion, published in 1990.