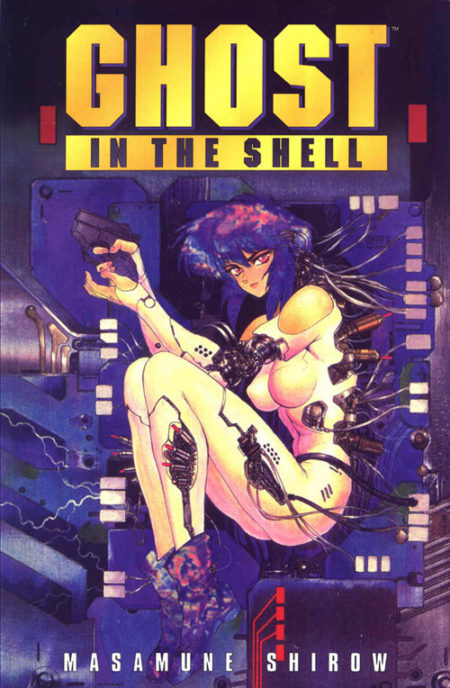 Public Security Section 9 is a counter-cybercrime organization, in mid-21st-century New Port City, Japan — led by Major Motoko Kusanagi — a synthetic “full-body prosthesis” augmented-cybernetic human. Thanks to her wetware (a computer user interface implant located in her cranium’s suboccipital nerve region), Kusanagi’s mind can seamlessly interact with mobile devices, machines, and networks; although her brain is a century old, her prosthetic body is one of the most advanced models on the market. So she’s not only the best hacker on her team, which is composed of former police and military types, she’s also the toughest; also, because the comic was published by the laddish Japanese manga anthology Weekly Young Magazine, Kusanagi is a slapstick, sexy character (think Tank Girl) fascinated by “human” vices. Villains include the Puppeteer, who has mastered the art of “ghost hacking” people’s cyberbrains and forcing them to commit crimes by proxy (and who turns out to be something much worse than a mere crook); as well as neo-noir corrupt officials and sinister corporate types. Shirow’s dynamic black and white drawings are simultaneously silly and hardboiled, detailed and gestural; the comic is too grown-up for kids, too child-like for grownups — perfect!

Fun facts: Manga artist-author Masanori Ota’s pen name is derived from the legendary sword-smith Masamune. Ghost in the Shell was released in tankōbon (stand-alone) form in 1991; in 1995, Dark Horse serialized the series in English. The 2017 movie adaptation was criticized because it cast Scarlett Johansson in the lead role; also, Evan Narcisse of io9 lamented that the movie version of Kusanagi asks the wrong sort of existential questions about herself.