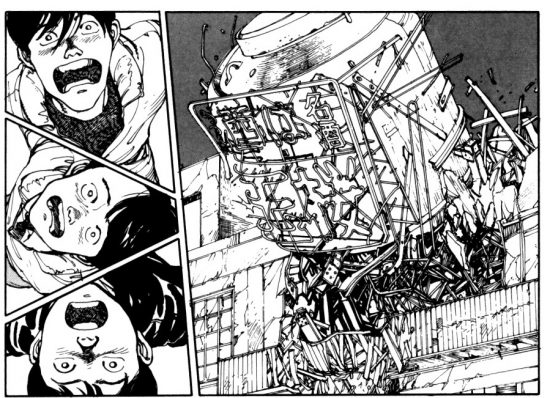 Some forty years after after “a new type of bomb” has supposedly exploded over Tokyo, in 1982, triggering World War III, vocational school student and bōsōzoku gang leader Kaneda gets caught up in a struggle between Neo-Tokyo’s military leader, Colonel Shikishima, and a resistance movement who’ve discovered that Shikishima’s scientists are secretly developing a super-weapon of some kind: “Akira.” While Kaneda and Kei, a female member of the resistance, investigate the Akira project, which may in fact have caused the 1982 destruction of Tokyo, Tetsuo — an already unstable member of Kaneda’s gang — develops powerful telekinetic abilities after a motorcycle crash. Tetsuo becomes leader of a rival gang, the Clowns, who start a violent citywide turf war; Shikishima then persuades Tetsuo to join his secret project — which involves wizened young “espers” with equally powerful abilities. All of which happens in the first action-packed volume of the Akira series — there are six, in total. What will happen when the increasingly deranged Tetsuo encounters the other espers — not to mention Akira? Can Kaneda and Kei prevent Shikishima from unleashing greater destruction? Who or what is Akira?

Fun fact: Serialized in Japan’s weekly Young Magazine from 1982–1990. The full 2,000-page series was translated, colored, and published in the US by Marvel/Epic from 1988–1995. The 1988 animated movie, directed by Katsuhiro Otomo, is considered one of the greatest animated films of all time. I saw it on the big screen, in ’89 — it was mid-blowing, at the time.