LEAVE IT TO PSMITH 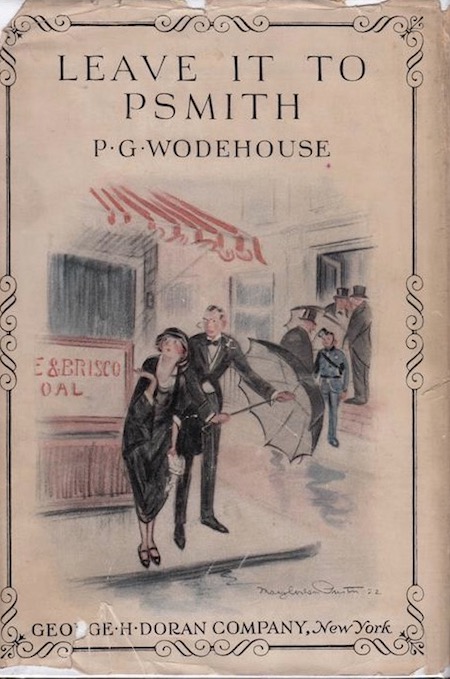 P.G. Wodehouse‘s comedic crime adventure Leave It to Psmith appeared on my list of the Best Adventures of 1923.

One of my favorite books ever — and one which has just this year entered public domain. We’re serializing it at HILOBROW.

After Bertie Wooster and Jeeves, Psmith is P.G. Wodehouse’s best-loved character. In Mike (aka Enter Psmith), Psmith is a silver-tongued schoolboy with an anti-authoritarian streak: “One can date exactly,” Evelyn Waugh would write, about Psmith’s debut in this 1909 novel, “the first moment when Wodehouse was touched by the sacred flame.” Forced to take a job in London, in Psmith in the City (1910) our hero devotes himself to ruining his boss’s peace of mind; and in Psmith, Journalist (1915), he crusades against New York slumlords and gangsters. Leave It to Psmith (1923), our hero’s final outing, has it all: romance, wit, slapstick physical humor, and a few thrills.

However, as you’ll see below. my advice to Hollywood is to tweak the original plot: Set the action in the days leading up to the outbreak of WWII, give Eve equal billing, and transform the diamond necklace into a military MacGuffin!

Leave It to Psmith is a character-driven romantic comedy and thriller about Eve, a British secret agent working to safeguard a British military invention from foreign agents… and Psmith, a charming idler (and harmless con artist) who inserts himself into the wrong side of the action.

EVE: Eve Halliday is a newly trained British secret agent. Smart, strong, and “a girl of action,” she desires to serve her country — and isn’t interested in falling in love. Alas, instead of being assigned to an exotic locale, she has instead been sent to Blandings Castle. In Wodehouse’s novel, Eve is a remarkable figure who nearly steals the show from Psmith. Who should play Eve: Nathalie Emmanuel? Sophie Cookson? Imogen Poots?

PSMITH: Rupert Psmith is an idle dandy given to sporting a monocle and top hat. He is no lazy aristocrat, but an antihero who rejects the pernicious idea that work makes life meaningful. His superpower is fast-thinking inventiveness, adaptability, high-handedness, and an ability to deliver himself of outrageous nonsense with a straight face. He seems like a con artist, but he is a performance artist — and the whole world is his stage. He is fond of outré slang terms. Aaron Taylor-Johnson? Nicholas Hoult? Taron Egerton?

LORD EMSWORTH: Emsworth is a brilliant mathematician who — based in his library at Blandings Castle — is working on complex aspects of the Committee for Scientific Study of Air Defense’s research. His abstract work often renders him absent-minded in the extreme. Rupert Everett? Hugh Laurie?

FREDDIE: Emsworth’s “smooth-haired” heir is obsessed with American cinema — for fun, let’s say Warner Bros. screwball comedies and crime movies of the ’30s — and brings self-reflexive humor to our story by comparing the action to something he’s seen in Racket Busters, or Girls on Probation. He is smitten with Eve, and importunes Psmith to help him woo her. Daniel Radcliffe?

LADY CONSTANCE: Emsworth’s sister is a formidable woman who — in preparation for a festival of the arts to be held at Blandings Castle — has collected a menagerie of poets, artists, and musicians from across the Commonwealth: India, Australia, Singapore, etc. She can be charming, but is frequently apt to comport herself like “Cleopatra on one of her bad mornings.” Kate Beckinsale or Chloë Sevigny?

BAXTER: Emsworth’s secretary runs Blandings Castle, he is the “real master of the house” — which he does with efficiency, to the dismay of all but Constance. Wodehouse describes him as “pronouncedly spectacled” — I would suggest that the spectacles are a disguise. We will discover that although “the Efficient One” is Psmith’s foe, he is also an intrepid man of action. Daniel Kaluuya?

COOTES & MISS PEAVEY: American con artists who have been recruited (by whom?) to steal the prototype magnetron locked in Lord Emsworth’s safe. Peavey, who smuggles herself into Blandings Castle as “one of the leading poetesses of the younger school,” is the brains of the duo; Cootes is the brawn. Cootes is in love with Miss Peavey; she occasionally feels the same. Miss Peavey: Lily Collins? Jessica Brown Findlay? Lily James? Emma Watson? Cootes: Will Poulter.

ASSORTED POETS & ARTISTS: They hail from every corner of the British Commonwealth. A colorful, rather seedy lot — they’re in the background of almost every scene, behaving oddly.

BLANDINGS CASTLE: The estate itself is a character. The gardens are lush; there is a boating pond; everything is bucolic and peaceful — except when Emsworth unexpectedly launches a rocket or sets off an incendiary device. The castle is a maudlin, monstrous pile. While they’re relocating to nearby Bletchley Park, the SIS is storing the magnetron in Lord Emsworth’s safe.

Summer 1939 — Paddington Station is chaotic, in part because Londoners are trying to get their families and possessions out of the city, just in case the Germans start bombing. There is a foreboding pre-war atmosphere… but British life must go on. Lady Constance and Baxter are organizing a shambolic, bizarre crew of international artists, including the poet Miss Peavey, who are coming to stay at Blandings for the festival. It seems that a Canadian poet, Ralston McTodd, is missing; Lady Constance has “long been a great admirer of his work,” his presence will be the festival’s crowning touch. Emsworth is there, reluctantly — he can’t stand artists, particularly the soppy Miss Peavey, but is powerless to say no to his dynamic sister Constance.

It is beginning to rain. Psmith enters the station, carrying a suitcase — his leisurely gait is in marked contrast to the hustle and bustle. He and Freddie meet cute and recognize each other; Psmith, who has come down in the world since they were at Oxford together, calls him “Comrade Freddie.” Psmith explains that has just quit the fish business: “I realize that humanity must be supplied with fish. What I feel is that there must be other walks of life for a bright young man.” He is headed home to rusticate, and despite his natty appearance he’s broke — “that low moaning sound you hear is the wolf bivouacked outside my door.” Freddie explains the arts festival and confesses that he neglected to invite the poet McTodd — and he’s dreading the moment when Aunt Constance finds out. He shares a book of McTodd’s poetry with Psmith.

Across the street from the station entrance, Eve is trapped by the downpour under an awning with her baggage. (She is no shrinking violet, but her disguise requires her to act like one.) Enthralled by her beauty, Psmith borrows Freddie’s umbrella and escorts Eve into the station… where Freddie, who is in love with her, is thrilled to see her; Eve is not thrilled. Freddie introduces Eve to Pamith, explaining that she has been hired to assist Emsworth with research. When Freddie is about to introduce Psmith, Psmith interrupts and says his name is “McTodd. Ralston McTodd.” The three of them join the larger party and board the train to Blandings.

The action now shifts to a semi-comedic train journey, where conflicts are introduced — as characters move constantly from one train car to another — that will develop in Act II:

Act I ends as the motley crew arrive at Blandings.

Over the course of the days leading up to the arts festival, the conflicts introduced in Act I will be developed. There will be sabotage, burglary, shooting, explosions — all of which will almost seem natural in the eccentric context of an English country estate. 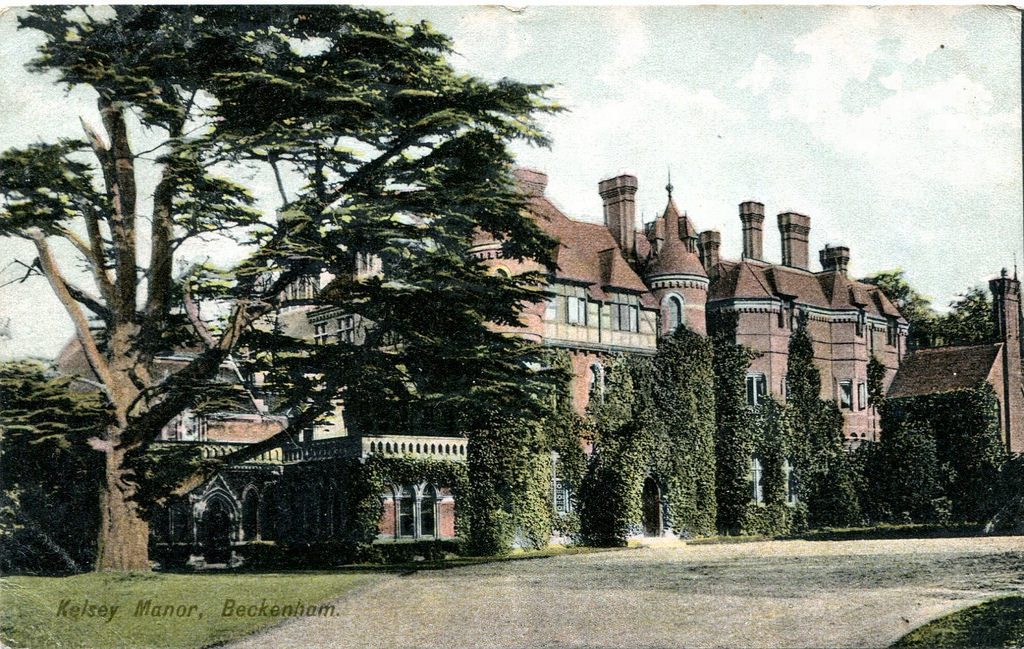 The plot — a semi-screwball, semi-serious spy vs. spy story, with the magnetron as MacGuffin — can be plotted in a variety of ways. But it will be a character-driven plot, as follows:

A few notes from Wodehouse’s book:

Emsworth to Psmith: “I trust you will not think me personal, but do you know, nobody would imagine you were a poet. You don’t look like a poet, and dash it, you don’t talk like a poet.” “How should a poet talk?” “Well, Miss Peavey waylaid me this morning and asked me if I didn’t think that it was fairies’ tear-drops that made the dew.” “Evidently an aggravated case.” (Later, Psmith will say to Miss Peavey: “I sometimes think, Miss Peavey, that flowers must be the souls of little children who have died in their innocence.” “What a beautiful thought, Mr. McTodd!” “Yes. Don’t pinch it. It’s copyright.”)

Lady Constance asks Psmith if he gets inspiration for his poetry from all sorts of things. “From practically everything, except fish.” “Fish?” “I have never written a poem about fish. One has one’s self-respect.”

Freddie wants Psmith to help him woo Eve. Psmith: “I am stumped. The cry goes round the chancelleries, ‘Psmith is baffled!’”

When Psmith finally introduces himself, it’s like so: “The name is Psmith, P-smith.” “Peasmith?” “No, no, P-s-m-i-t-h. I should explain to you that I started life without the initial letter — but it seemed to me that there were so many Smiths in the world that a little variety might well be introduced. The p, I should add for your guidance, is silent, as in psychic.”

The conflict rises to one final crisis and then is resolved. The arts festival provides the backdrop.

Psmith proves that he can be a man of action. Eve is terrific. Even Freddie plays a role.

Psmith informs Freddie that he and Eve are in love. He has told her several times that she is falling in love with him; at the very end, she agrees.

The happy ending is marred by tragedy: We hear over the radio that Hitler has invaded Poland. This means war! But Eve and Psmith — even Baxter — will rise to the challenge. 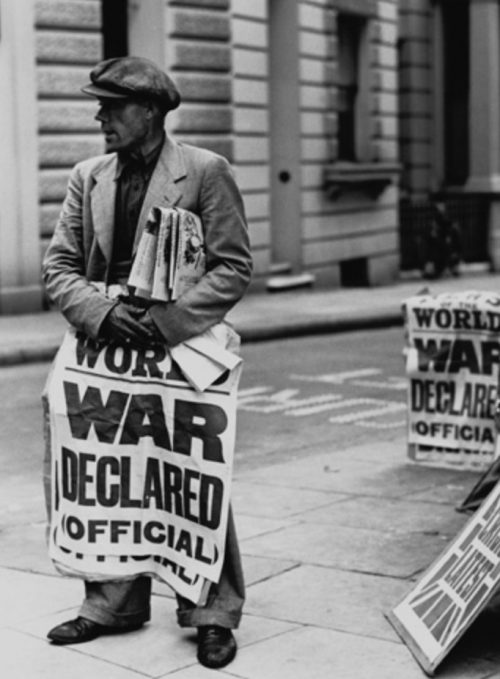 NB: I’ve done a tiny amount of background research. In the late ’30s, Britain’s Secret Intelligence Service (SIS) established Section D to carry out sabotage and other clandestine operations. (It was around this same time that the SIS began to be commonly referred to as MI6.) SIS purchased Bletchley Park as a wartime base — safely outside London. Along with Alan Turing and his code-breakers, Section D moved to Bletchley Park to develop sabotage material — including incendiaries and plastic explosives.

During these same years, the British government established a Committee for Scientific Study of Air Defense, which designed several amazing inventions, including an air-to-surface-vessel radar, the turbojet engine, and a variable time fuse. The Committee’s analysis determined that it would be possible to build an atomic bomb light enough to be flown overseas and dropped on a target. But their key invention was a magnetron so small it could be installed in planes — the first airborne radar device, which would allow fighter pilots to “see” bombers in the dark. The Committee for Scientific Study of Air Defense’s research was far ahead of anything developed by American scientists.

The Committee stored all of their top-secret research, along with the prototype magnetron, in an unremarkable black metal box no larger than a suitcase. Once the Luftwaffe began bombing Britain, in 1940, they made plans to smuggle the precious box safely to America.