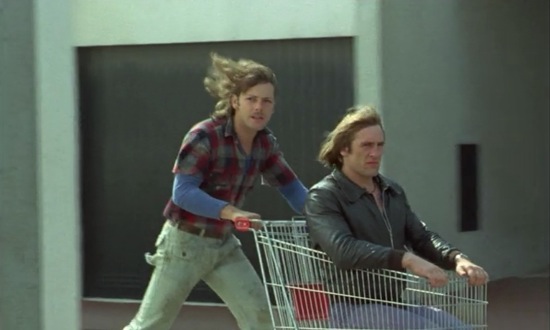 The triumph of the paranoid theory that social control is exercised less through class domination than through infinitely more subtle mechanisms marks the end of the Sixties (1964-73). Though Baudelaire, Philip K. Dick, and others had already suggested as much, two 1972 French texts in particular paved the way for the Seventies era (1974-83): Deleuze and Guattari’s L’Anti-Œdipe, which argued that if Westerners have been trained to desire their own repression at home, at school, and at work, then the agent of social revolution was to be found not in the working class but among the unnormalized, the shiftless, and the crazy; and Bertrand Blier’s nobrow picaresque novel, Les Valseuses, in which two loubards (louts) steal cars, assault women, and in various other ways take their desires, as the Situationists had urged, for reality. Two years later, Blier’s feature film adaptation of the book (whose title is slang for “testicles”) was a succès de scandale in France; and it made Gérard Depardieu a star. The blocking in the opening scene captures the neither-heroic-nor-antiheroic nature of Jean-Claude (Depardieu) and Pierrot (Patrick Dewaere); they are half-wild denizens of “la zone” on the outskirts of a large town, contemptuous of work and workers. As Pierrot pushes him around in a shopping cart, Jean-Claude keenly tracks his prey — a woman whom they will harass and rob — like the feral predator he is.