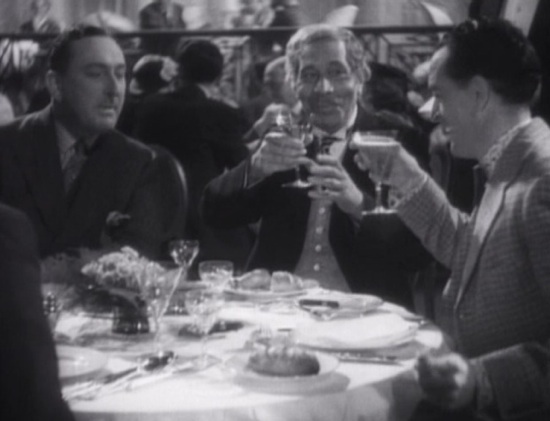 In Meet John Doe (1941), which was directed by a member of the Hardboiled Generation, a temporary tramp is warned against the allure of civilized life by an older hobo who has developed a hardboiled exoskeleton. It’s illuminating to compare that movie with The Guv’nor (1935, released in the US as Mr. Hobo), a British comedy whose direction was strongly influenced by its star, George Arliss, a member of the far less cynical Anarcho-Symbolist Generation. As a favor to “Flit” (Gene Gerrard, right), a temporary tramp who’d like to find regular work, a confirmed hobo nicknamed “The Guv’nor” (Arliss, center) reluctantly permits snobbish Parisians to mistake him for a millionaire Rothschild. A proto-Chauncey Gardiner type, the Guv’nor soon becomes a bank president. His commitment to peripatetic idling never wavers, though, nor does preserving his existential freedom require him to become hardboiled. As is indicated by the blocking in this scene, in which the Guv’nor is wooed by the banker Barsac (Frank Cellier, left), the kind-hearted Guv’nor has eyes only for his comrade’s happiness. He wants neither to rule nor to be ruled.