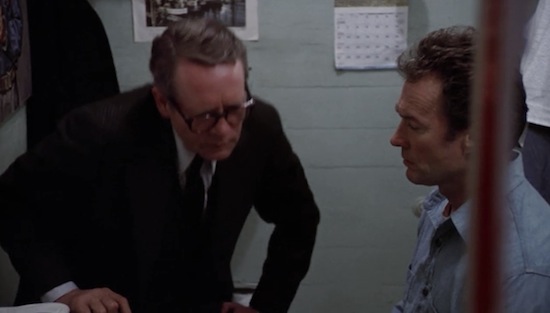 Like James Cameron’s Titanic, the plot of Escape from Alcatraz is merely a nerd’s excuse to squire viewers around every inch of an impressively constructed human-container. However, because there were no CD-Roms in 1979, perhaps we can be slightly more forgiving of Don Siegel; what’s Cameron’s excuse? I enjoy Alcatraz, but not because of its plot or any of the performances; rather, it’s because I enjoy the theme of existential and epistemological jailbreak in the oeuvre of creative types — from postmoderist theorists to this movie’s two stars, Clint Eastwood and Patrick McGoohan — who were born between 1924–1933. As I’ve proposed elsewhere, members of this cohort were a “silent” generation only in the sense that at some level they recognized themselves as inmates in a prison with invisible bars… and they were silently determined to tunnel their way to freedom. This movie literalizes the invisible-prison metaphor in a ham-fisted manner, to be sure; but the blocking in the odd scene shown here — the Warden, whom at least some viewers at the time would have recognized as the creator and star of the 1967–68 British TV show The Prisoner, squeezes into jailbreak artist Frank Morris’s tiny cell for a not entirely unpleasant chat — conveys a particularly subtle notion. In what Foucault called (in 1975) a “disciplinary society,” the distinction between the inside and the outside of a prison ceases to be a meaningful one. For captive and captor alike, there is no escape.