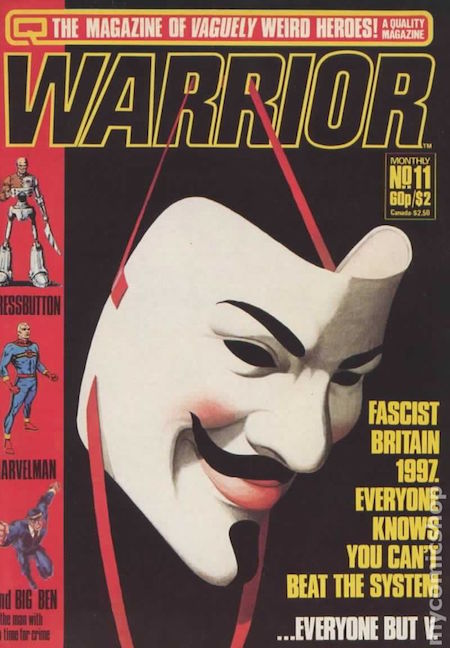 In the near future, following a nuclear war, the United Kingdom has become a fascist state run by the Norsefire Party. V, a flamboyant anarchist terrorist and vigilante whose face is never seen — he wears a Guy Fawkes mask — begins a campaign to bring down the government (and all governments); it’s like Nineteen Eighty-Four with a happy ending. V, we discover over the course of the graphic novel, was imprisoned in a Norsefire concentration camp and experimented upon… which led him to develop superhuman strength, reflexes, and endurance. He blows up the Old Bailey and the CCTY surveillance buildings, kidnaps the propaganda minister, and murders a bishop — what will his final act be? He’s pursued by Eric Finch, the secretly decent head of Norsefire’s police. The Robin to V’s Batman is Evey, a young woman whom he saves from a rapist and grooms as his successor — through very dubious methods.

Fun facts: Mostly published in black and white, in the British comics magazine Warrior; when the magazine folded, DC Comics reprinted and completed the story in color. In one of HILOBROW’s most frequently viewed posts, Molly Sauter traces the adoption of the Guy Fawkes mask by Anonymous, following the marketing blitz for the (lame) 2006 film adaptation of the comic.