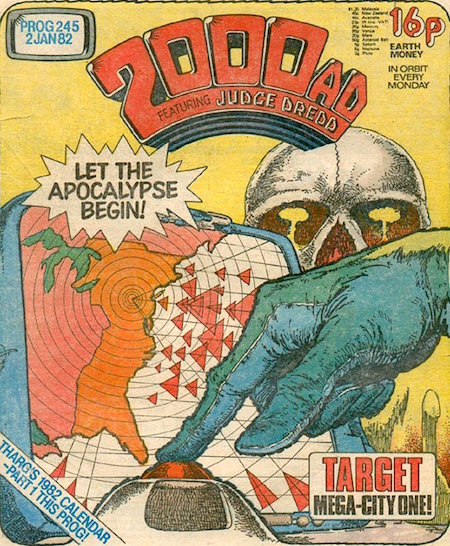 In 1977, writer John Wagner and artist Carlos Ezquerra created Judge Dredd — a violent sci-fi comic strip spoofing American action movies (military, cop, western, vigilante) of the Seventies — for British readers of the weekly magazine 2000 AD. In the 22nd century, the titular judge-jury-and-executioner character and his colleagues police Mega-City One, which is subdivided into gigantic towers known as City Blocks stretching from Boston to Key West. In “The Apocalypse War,” Russkies from East Meg One, a Soviet citystate, invade Mega-City One. Hundreds of millions of Mega-City One citizens are killed, and ninety percent of the city is captured — while Dredd tries to organize a guerrilla resistance movement. Failing that, he must consider the option of completely obliterating East Meg One! “Block Mania,” the prologue to “The Apocalypse War,” demonstrates how Mega-City One was softened up for invasion: a massive conflict between City Blocks is engineered by an East Meg One agent, Orlok, who infects the water supply with a psychotropic drug. Orlok also kills Dredd’s sidekick, Judge Giant, in an almost casual way — which was shocking to even the shock-proof readers of 2000 AD.

Fun fact: Via his excellent Dredd Reckoning blog, Douglas Wolk notes just how dark the humor of this storyline is: “It’s a story about genocide with comedy relief interludes — the Walter-and-Maria slapstick routines, the Country Joe-type folksinger getting splattered by a missile.” In 1987, Games Workshop produced a board game, set in the Judge Dredd universe, called Block Mania; players take on the role of rival City Blocks — and use spray paint, guns, flamethrowers and heavy lasers to vandalize and destroy neighboring blocks.