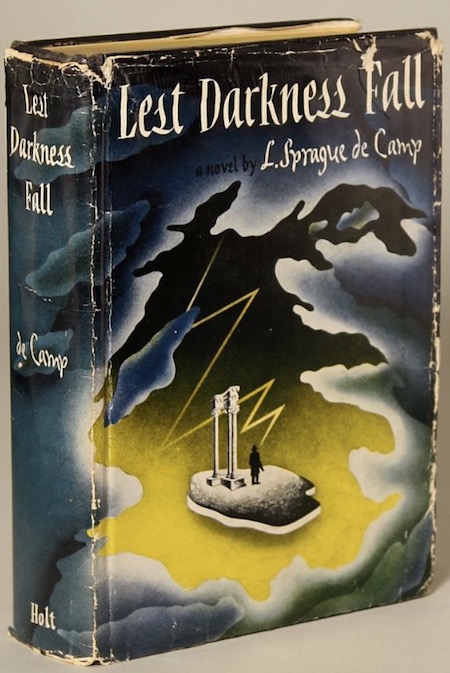 Thanks to a Connecticut Yankee in King Arthur’s Court-esque time-travel phenomenon, archeologist Martin Padway ends up in Rome, c. 535. The Gothic War — in which the East Roman Emperor Justinian I sought to recover the provinces of the former Western Roman Empire, which the Romans had lost to invading Ostrogoths in the previous century — is about to begin. Because he knows that this conflict would usher in the Dark Ages, Padway attempts to alter the course of history. There is some Robinsonade action, at first, as Padway begins distilling brandy, expanding his business, and getting involved in politics. He teaches his clerks Arabic numerals and double entry bookkeeping; he develops a printing press, issues newspapers, and builds a long-distance semaphore telegraph system. In the last third of this short novel, he restores senile Ostrogoth emperor Theodahad to the throne (as a puppet ruler), moves the capitol to Ravenna (one of the few cities that was never sacked by the Goths), and leads Rome’s defense against Belisarius, Justinian’s talented general — then enlists Belisarius’s help to command an army against the Franks. Oh, and he emancipates the Italian serfs!

Fun fact: A shorter version was first published in Unknown (December 1939). Lest Darkness Fall is considered one of the most influential early alternate-history yarns.