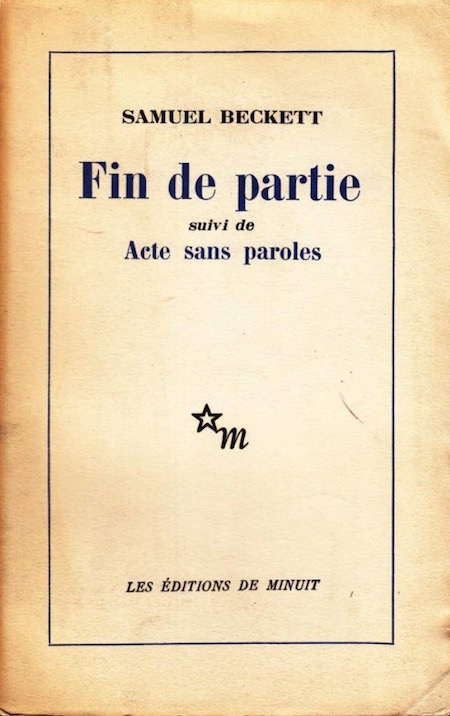 Like Nevil Shute’s On the Beach, serialized the same month that Beckett’s second-most famous play was first performed, Endgame begins at the end… of everything. Along with his long-suffering servant Clov, and his legless parents Nagg and Nell, Hamm — a horrid old blind man — is holed up in a room of his home. Outside, there are no signs of life — animal or vegetable. We’re not sure what has happened, but the first line of the play is Clov’s “Finished, it’s finished, nearly finished, it must be nearly finished.” (Hamm, in a later exchange with Clov: “All is… all is… all is what?” [Violently.] “All is what?” Clov: “What all is? In a word? Is that what you want to know? Just a moment.” [He turns the telescope on the without, looks, lowers the telescope, turns towards Hamm.] “Corpsed.”) Periodically, as Hamm mentions various phenomena — bicycle wheels, sugarplums, rugs, painkiller, Nature itself — Clov reminds him that these things no longer exist. The action of this absurdist play, such as it is, consists of the characters’ efforts to simply get through another meaningless day. The implication, being, perhaps, that the true value of humankind’s beliefs and rituals is: zero.

Fun fact: Nell, the one character in the play who groks the absurdity of their bleak, endgame-like existence, at one point says, “Nothing is funnier than unhappiness.” Beckett would later tell an interviewer that this is the most important line in the play.