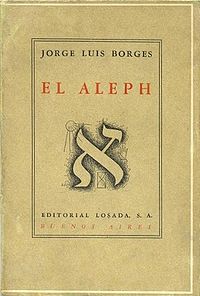 When Carlos Argentino Daneri, a middling poet, announces his intention to write an epic poem describing every single location on the planet in minute detail, the narrator of “The Aleph” isn’t impressed. However, when an expanding business proposes to tear down the poet’s house, Daneri confesses to our narrator that he can’t write his poem without the aid of the Aleph — a point in space containing all other points, and therefore allowing a viewer to see anything and everything in the universe from every angle simultaneously, without distortion — over which his house was built. The narrator visits Daneri’s basement and views the Aleph for himself; he’s staggered! But, because he despises Daneri, he gaslights him: He doesn’t admit that there’s anything there. Other sf-ish stories in the collection include “The Immortal,” about a character who wishes to stop being immortal; and “The Zahir,” about a phenomenon — currently made manifest as a coin — that causes its possessor to perceive less and less of reality.

Fun fact: The story “The Aleph” was first published in the September 1945 issue of the Argentinian literary magazine Sur.