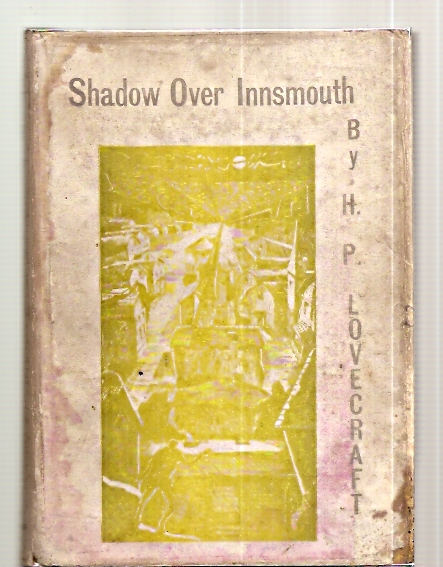 While on an antiquarian tour of New England, this novella’s unsuspecting narrator visits Innsmouth, Massachusetts — a blighted seaport, near Arkham, which is populated entirely by people who look a bit odd and who tend to shamble. The narrator persuades an old-timer, named Zadok, to tell him about the town’s history… and hears a wild story about fish/frog-like humanoids known as Deep Ones, who helped Innsmouth’s fisherman prosper, in exchange for the occasional human sacrifice! It seems that an Innsmouth merchant, Obed Marsh, had discovered the creatures while on a voyage in the West Indies. (Which is why this is a science fiction horror story, not merely fantasy: it’s about a Lost Race.) Marsh established a church — the Esoteric Order of Dagon — in honor of the Deep Ones’ deity. Over time, the Deep Ones slaughtered some of Innsmouth’s residents, and bred with others; their offspring looked like normal humans, but only for a while. The narrator doesn’t believe Zadok’s story… and yet, Zadok disappears mysteriously. Later, the narrator discovers that he, himself, is descended from Obed Marsh — and that he may become a frog-man. Is he just going mad? Or will he dwell in the sunken city Y’ha-nthlei?

Fun fact: This was only book of Lovecraft’s fiction distributed during his lifetime. Lovecraft based the town of Innsmouth on his impressions of Newburyport, Massachusetts. Arkham, of course, is based on Salem.