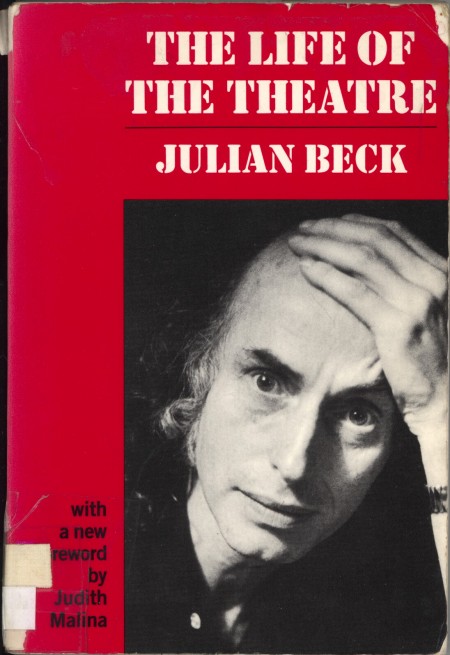 The life of theater artist and provocateur JULIAN BECK (1925–85) was one of hard-won amazements. Born in upper Manhattan to loving, prosperous Jews, in 1943 Beck admitted homosexual urges to his draft board and met 17-year-old German-Jewish immigrant Judith Malina. Beck was a poet and painter, Malina an aspiring actor and director — and from their friendship evolved a lifelong anarcho-pacifist collaboration, including an open marriage, children and (inspired by radical German exile director Erwin Piscator) the 1948 founding of The Living Theater repertory company. Their first production, staged in their West End Avenue apartment in summer 1951, featured works by Paul Goodman, Gertrude Stein, Lorca, and Brecht. Moving to the Cherry Lane Theater that autumn, they produced Stein’s Faustina and Kenneth Rexroth’s Beyond The Mountains, the former a success, the latter less so. “An Evening of Bohemian Theater” in early 1952 comprised Stein’s Ladies Voices; Picasso’s farce Desire (Tiger By The Tail) and Eliot‘s Sweeney Agonistes, the last with music by Morton Feldman. In August, a double-bill of Jarry’s Ubu Roi — translated by Beck and Malina — and John Ashbery’s The Heroes opened well, but afterwards the Living Theater was broke. While triumphs and travails would follow, the couple’s off-stage 1953 was also eventful: Maya Deren asked Beck to play a bartender in a gay Brooklyn waterfront saloon; Malina pursued an intense affair with James Agee; Beck and Malina attended Julius and Ethel Rosenberg’s funeral; and, weeks later, Weegee casually inquired if the couple would pose nude for him.

On his or her birthday, HiLobrow irregularly pays tribute to one of our high-, low-, no-, or hilobrow heroes. Also born this date: John Bonham, Gilbert Shelton, Fassbinder, Johnny Paycheck, D.M.C., Jean Rouch, Walt Whitman.