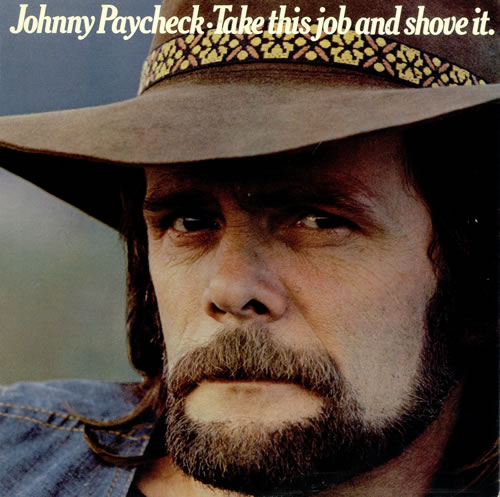 My dad listened to country music before work. Frightening songs; bad things were happening. Your family is your life but you can’t make it off the barstool. You have the best girl and you keep treating her as terrible as you feel. Good job? Bullshit. The blue-collar, reckless, paragospel, high, heartbroken “Outlaw country” musician JOHNNY PAYCHECK (Donald Eugene Lytle, 1938-2003) took his name from one of the many boxers who fought Joe Louis and went down hard. Paycheck did his prison show from inside the joint; instead of a neat Army photo in the newspapers, he was court-martialed by the Navy; Hells Angels were friends. Paycheck was broken, sinning for our thoughts, crooning wreckage and apologies, his beset, addict eyes fixed on the wild frustrations making us wonder whether we’ll ever figure anything out. (“I’m gonna wear/This whiskey glass stare/Till my memories go blind.”) What little fame Paycheck tasted was from the 1977 hit “Take This Job and Shove It.” America went wild and Hollywood made a movie; Paycheck was on Dukes of Hazzard, but he wasn’t Muppets material. Listen to him at the end, to his acoustic “Old Violin,” and consider the outlaw who’s too numb and crazy to stay down. When he died, the New York Times obituary claimed he’d been inducted into the Country Music Hall of Fame, then ran a correction. Damn! An outlaw can’t get a break.

On his or her birthday, HiLobrow irregularly pays tribute to one of our high-, low-, no-, or hilobrow heroes. Also born this date: Gilbert Shelton, Rainer Werner Fassbinder, and John Bonham.