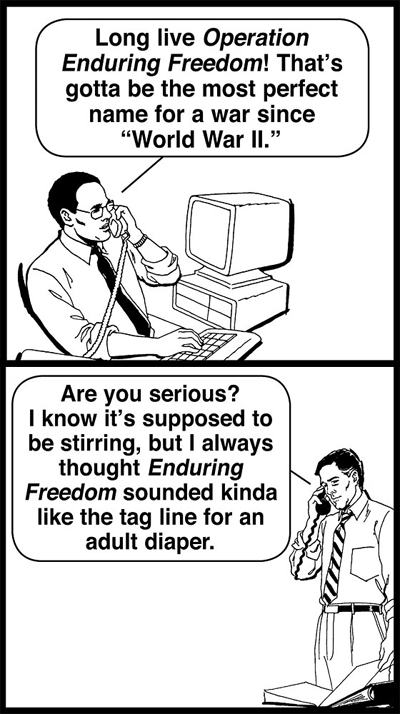 In the days following the September 11th, 2001, terrorist attacks few people had the courage to be funny — deeply, mordantly, stupidly funny — about America’s unwilling return to the slaughter-bench of history, but New York-based cartoonist DAVID REES (born 1972) was one of them. Using repeated frames of clip-art office workers having bitter, foul-mouthed conversations over telephone and water cooler, his internet comic Get Your War On, which debuted on October 9th of that fall, dared to mock knee-jerk patriotism and dumb-ass foreign policy even as it acknowledged the wounds and tilted realities of the new century. This was trickier than it may seem now: wearing a black “Get Your War On” t-shirt in a London supermarket in 2002, I was confronted by an irate Englishman who assumed (a) that I was American, and therefore also (b) that the shirt’s message was unironically pro-war. (Note to self: Be more careful when dressing to go shopping.) So naturally Rees was reviled by some for his satirical take on the Bush Administration; but the strip made him a cult hero, the subversive graphic equivalent of Lewis Lapham, whose Harper’s editorials from the same period are required reading. As he promised, Rees ended the strip — but not his sterling work as political and cultural satirist, which gleefully continues — when George W. Bush left office in January 2009.

On his or her birthday, HiLobrow irregularly pays tribute to one of our high-, low-, no-, or hilobrow heroes. Also born this date: Octavia Butler, Schoolly D, Todd Rundgren, Félix Fénéon, Green Gartside.