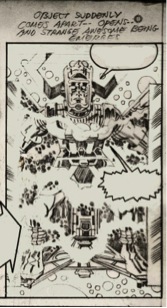 Second in a six-part series of posts.

The Kirby/Lee relationship was a unique one. Typically, a writer will give a comics artist a type-written script, then the artist will illustrate the writer’s story based on that script. Not so with Kirby/Lee. This is how they worked:

In Phase One of the Kirby/Lee collaboration, Kirby is what I call the “Principal Author” of his 1960s Marvel stories. He is the primary storyteller; he is the writer and author of the book in the pencil phase. I’ve made the analogy in that past that a Kirby penciled story is like a silent film. Looking at the images and margin notes, you can easily follow the narrative without any captions or word balloons. I wrote a satirical posting at Kirby Dynamics where I used Chaplin’s “A Dog’s Life” to make that analogy. If I added dialogue to Chaplin’s silent film, would I deserve to list myself first in the credits for that film as the sole writer? I think not.

Comic books are a very different medium than film — reading is an important part of the process to comic book fans, so there has to be a fairly significant amount of text in a book, or the readers will feel like they’ve been ripped off. In Phase Two, Lee has to begin the process of adding word balloons, caption boxes, and sound effects to Kirby’s art so that it is a traditional comic book. I broke up Phase Two into two parts because I wanted to emphasize that deciding where to put word balloons is a part of the process that many readers take for granted because the captions tend to be invisible in a comic. (Can you remember the last time you thought to yourself, “Boy, this page would be so much better if that thought balloon had been more to the right.”) But there are a few interesting things we can reflect upon looking at this single page of Kirby story/art. I went ahead and left the caption balloons and boxes on the image, but I erased Lee’s text. 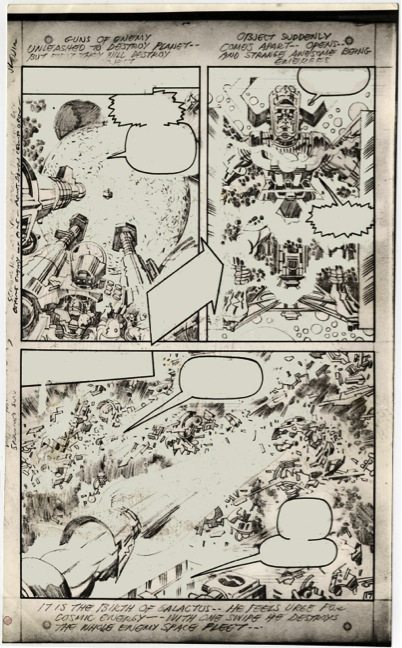 You can see that Kirby fills the entire page with illustrations. He could have drawn word balloons on the art himself and left those areas blank, but instead he focuses on drawing the most dynamic imagery he can; he leaves it up to Lee to decide how to caption the piece. This is an unselfish way of working – for every word balloon you see on a piece of Jack Kirby artwork, in all likelihood there are details in that artwork that have been obscured.

For example, there may have been another alien character and another gun turret underneath this arrow in panel one. 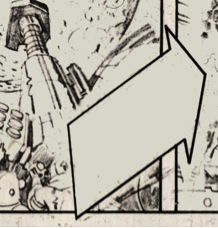 Some machinery and debris have been eliminated by these captions in panel three.

You can see half of a piece of some Kirby-tech erased underneath this balloon and all around it. 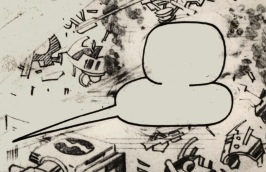 Is this a bad thing? Not necessarily – that’s how the comics medium works. Kids expect captions — and, besides, without them this is not a comic book, but a collection of stills. I do think it is notable to consider the fact that Kirby put a wealth of detail in every inch of his work, unconcerned about what would or would not inevitably be covered by Lee’s captions. Many comics artists from that period didn’t even draw backgrounds, they left that up to the inkers.

The arrow between panel one and panel two is another nice example of how the captioning process worked. 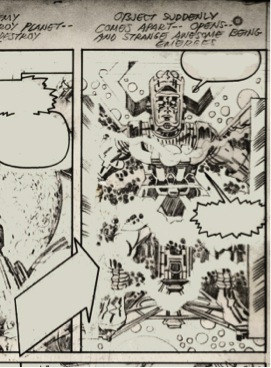 Kirby doesn’t leave Lee much room at the top of that panel for significant text, but the page needs more verbiage or the reader will flip past this page in a few seconds. So Lee cleverly uses that arrow. It’s totally unnecessary – anyone looking at the image can see the cube is opening – but the page needs more words so the eye will linger on it for a minute; Lee does a good job here of finding a blank spot on the page to put those words.

Kirby averaged about three pages a day, so it would have taken him a week or so to write and draw a twenty-page story. For one book like Thor #162, probably a good 60 to 80 hours of work at his drawing board figuring out the story, designing new characters, putting the players through their paces, designing the architecture, creating new Kirby contraptions, and striving to produce innovative artwork month-after-month in addition to hours not at the board reflecting on the next month’s batch of stories. I suspect it took Stan Lee maybe 2 to 3 hours to add text to this book.

Go ahead and add your own captions to this page. Kirby could have done so in a matter of minutes. It must have been infuriating not to be able to finish his own story and collect a well-deserved writer’s salary and credit.

For tomorrow, please go ahead and pretend you are the Guest Boss/Writer/Editor/Art Director of Marvel Comics in 1969 – fill in those word balloons.