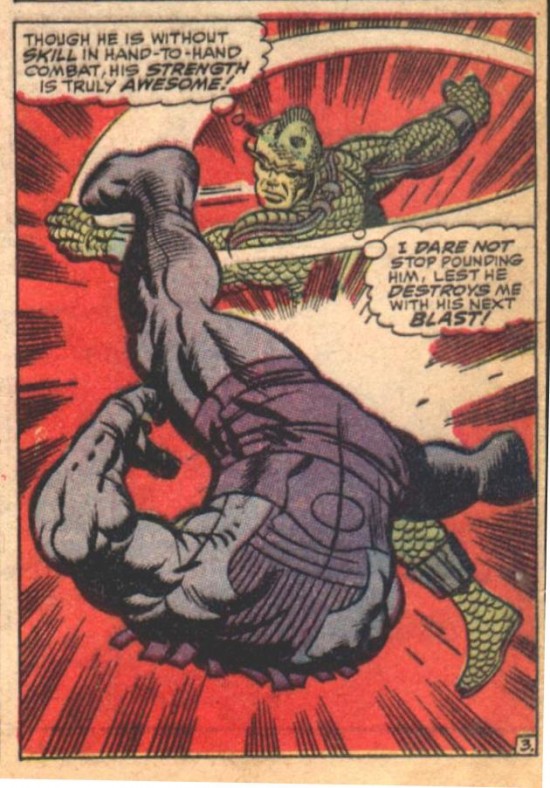 Here’s what I think Jack’s margin notes say: “Triton wangs out even harder — knowing he must knock out Blastaar or be blown to smithereens.”

I’m pretty sure the text says “wangs,” but not 100%. I’ve never personally heard that term used before, certainly not as a verb, but that’s what it appears to be. Could be some kind of slang Jack picked up as a kid or Jack getting creative with language. I find Jack’s margin notes a lot of fun. They’re very conversational, direct, and simple. They’re straightforward and no-nonsense — very much like Jack’s own style of speaking. I get the feeling looking at hundreds of Kirby margin notes that Jack was having a blast producing this material during the mid-1960s. There is a sense of almost childlike glee as Jack describes the brawls taking place in his stories — like a kid on a street corner telling his buddies about a brawl he just saw take place.

I suspect that Jack’s approach towards portraying combat in the pages of a comic book like Fantastic Four was probably influenced by two specific things: growing up on the Lower East Side of New York during the 1920s, and his experiences fighting on the European battlefields during World War II. As a kid, young Jacob Kurtzberg probably wasn’t the Joe Louis of the neighborhood because he was fairly short in stature, but certainly Jack took part in his fair share of street-fighting, and that type of fierce, competitive, fist-fighting culture must’ve been a huge part of his early life. The Thing is a great example of this type of mentality. The character doesn’t have any superpowers like x-ray vision or an ability to fly — to survive one-on-one combat, the Thing character relies only on his strength, bravery, and wits — mainly his fists. 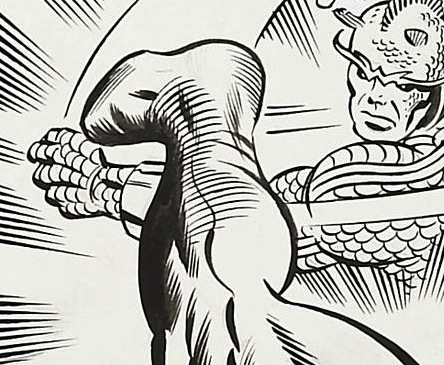 Although Triton is a character better suited to underwater combat, here Kirby has him engage in a straightforward toe-to-toe boxing match with the streets of New York serving as the backdrop. In this panel, Triton slams the character so hard he is turned upside down and backwards. A perfect visual representation of a protagonist dominating an antagonist. The image probably defies the laws of physics but it clearly communicates the idea that, for at least a moment, Triton is winning the fight. On the other hand, Blastaar symbolizes the concussive force of a bomb blast. He doesn’t use any type of technology to produce that kind of energy, but instead is physically capable of hurling explosive energy from his finger-tips — a living incarnation of the tremendously destructive forces Jack saw first-hand during his service in the Second World War — Blastaar is an anthropomorphic representation of the devastation Jack witnessed on the war-torn streets of Europe. Of course, in a comic book, no civilians ever die in a rubble-strewn Kirby City, but the fistfights are ferocious — charged with a metaphysical electricity — and the damage to everything but civilian human life is extreme.