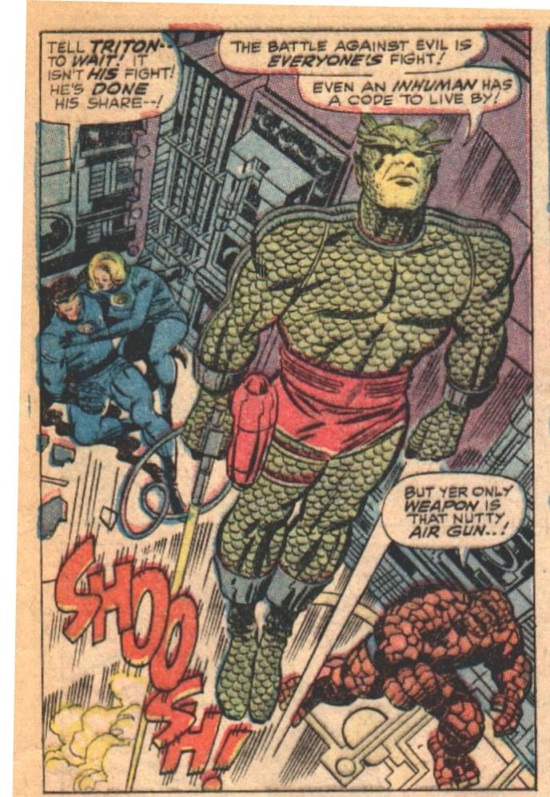 The published image is actually quite messy, which is fairly common for a lot of pre-digital-era comic book art. Note especially the blue color obscuring part of Mr. Fantastic’s face. You can see the red coloring is a little off in the sound effect. The purple background bleeds into the word balloons. Such was the nature of comic book publishing during the Sixties, but I suppose some fans feel a nostalgic love for the old comic book images — I know I loved them as a kid, and barely even noticed the sloppy color printing when I was 13 years old.

As most of you know, when Marvel reprinted much of this material starting in the Seventies, they used stats — inferior copies of the original B/W images — meaning a certain amount of detail was lost in the reprint process. So although sometimes the coloring creates a little bit of a mess, the original Sixties publications are the best way to look at a fairly clear and accurate published representation of the original art (although I do believe Marvel has used some of the actual source documents scanned by owners of original artwork for a few of their recent Kirby reprint publications).

Obviously looking at the original artwork itself is the best way to see it in its purest form.

I asked Joe Sinnott’s son Mark how long it took Joe to ink a typical page of Kirby art. Mark told me his father consistently worked eight hours a day, and he could usually ink about three pages of Kirby art per day unless there was an overabundance of detail, in which case Joe might only be able to ink two pages of Kirby art in a day. I think Joe Sinnott’s willingness to put in that extra time on complex compositions is one of the reasons the Kirby/Sinnott artwork is so special and so influential. Sinnott gave Kirby’s raw pencils a beautiful sheen reminiscent of the wonderful work produced by other stellar comics inkers who are considered India Ink masters — men like Alex Raymond and Wallace Wood. Some critics have argued that Joe “prettied-up” Jack’s work too much, but I think the combination is wonderful: Joe’s gorgeous, slick line-work made Jack’s sometimes ugly, wild, weird, impressionistic, abstract visuals more accessible to many readers. I know when I was reading reprints of the stories in the Marvel’s Greatest Comics series during the late Seventies, I was one of those fans who instinctively felt the Kirby/Sinnott combination was the best one-two punch in comics.

Here is what Jack’s margin notes say in the top-left of the page over panel 1: “Triton using air jet gun, he used to propel himself in Negative Zone to rescue Reed — now propels himself to roof.”

To me, this is a great example of Kirby being an extraordinarily considerate collaborator. Jack’s text makes it very clear to Stan Lee what type of technology he’s having Triton use to shoot himself into the sky. This would save Stan a great deal of time when he would add dialogue to Jack’s visuals; Stan didn’t have to waste a moment trying to figure out what was taking place in Jack’s story — Kirby made it crystal clear in the margin notes. Also notice Lee incorporates Kirby’s directions into the dialogue — the Thing’s dialogue reinforces the concept that Triton is using an air gun to fly: “But yer only weapon is that nutty air gun!” Interestingly, Lee’s dialogue for the Thing frequently resembles the vernacular of Jack’s written margin notes.

Here’s a comment Lee made when discussing the Kirby/Lee collaboration during his recent testimony in the Kirby vs. Disney/Marvel court case. The complete transcript is here.

Lee was asked, “Did Mr. Kirby ever suggest dialogue?”

STAN LEE: “Not orally, but what he would do, when I would give Jack a rough idea for what the story should be, and he went home and he drew it in his own way, laying it out the way he thought it would be best, he would put in the borders, the margins of the pages, he would put little notes letting — so I would understand what he was getting at with each drawing, and he would sometimes put dialogue suggestions also.”

It also appears Lee had someone add some speed lines to the sound effect because they lack Joe Sinnott’s trademark confident thin-to-thick brushstroke.

Looking at a few hundred examples of Kirby margin notes over the last few years (scans sent in by collectors, mainly scans I collected online), I think this panel is a fairly representative example of the symbiotic working relationship that existed between Kirby/Lee/Sinnott. This seems to be the chronology: (1) Kirby begins the process with the illustrated story and margin notes, frequently Jack doesn’t even work from a plot. He mails the art to Lee in NYC; (2) Lee adds captions and dialogue (either type-written, or sometimes in blue-line pencil on the artwork itself); (3) the letterer (in this case Sam Rosen) adds illustrated text; (4) the artwork is mailed to Joe Sinnott who inks Jack’s pencils; (5) then Joe mails the finished art back to the Marvel offices where Stan Lee goes over it again and makes additional changes, which are carried out by members of the office production staff like Sold Brodsky or John Romita. 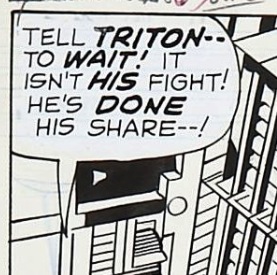 For example, look closely at the word balloon in the top left corner — you can see all the dialogue has been covered in white-out, and replaced with the text written in the small circle right above the change. Those notes are in Stan Lee’s handwriting. This is obviously a change made at the very end of the process.

Here’s another quote from Lee from his testimony, discussing giving Kirby a plot or a story:

STAN LEE: “… I might give him a very skimpy outline like let Dr. Doom kidnap Sue. Now, when he drew the strip, he might introduce a lot of characters that he came up with in the story. He might decide to have Dr. Doom send some giant robot to get Sue Storm, and he would make up the robot. Or there might be some other people. Sure, Jack would often introduce a lot of new characters in the stories.”

Here’s another quote where Lee discussed the division of labor from Mark Evanier and Steve Sherman’s brief biography of Jack available at the Jack Kirby Museum and Research Center website:

STAN LEE: “‘Some artists, of course, need a more detailed plot than others. Some artists, such as Jack Kirby, need no plot at all. I mean, I’ll just say to Jack, ‘Let’s let the next villain be Dr. Doom’… or I may not even say that. He may tell me… he just about makes up the plots for these stories. All I do is a little editing.”