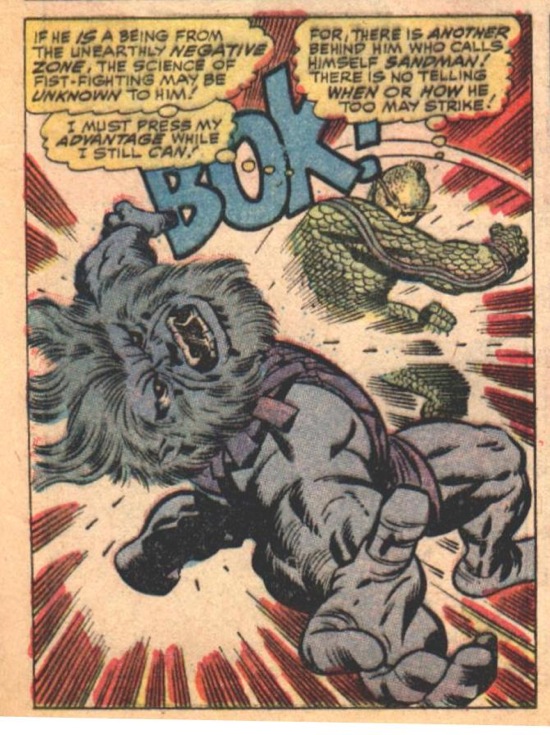 Lee’s published dialogue is fairly self-explanatory. In many respects, it’s simply there to fill space. You don’t really want to distract the reader too much from Kirby’s awesome visuals, but you need to give the reader some prose, or they’ll finish the comic book in five minutes and feel like they were ripped-off. Adding some dialogue, whether relevant or not, forces the reader to linger on the page for a while longer. In fact, in his recent testimony in the Kirby vs. Disney/Marvel court case, Lee himself suggests this is indeed the case. 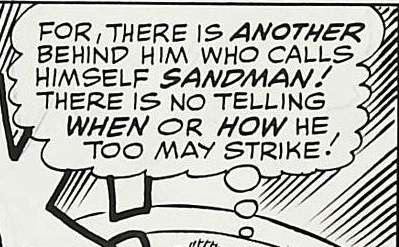 STAN LEE: “… Very often I would write dialogue to fill up spaces. In other words, I also indicated where the dialogue balloons and the captions should go on the artwork. And I might not have written so much if he had made the face bigger, but inasmuch as there was that space on the upper right-hand part of the page, I put in more dialogue to sort of dress up the — balance the panel with picture and dialogue.”

In my opinion, this panel is a perfect example of solid Kirby/Sinnott/Lee artwork. Kirby provides a remarkably dramatic action image, Sinnott inks the pencils to perfection, and Lee’s dialogue visually balances out the image — giving you a textbook example of an effective comic book illustration.