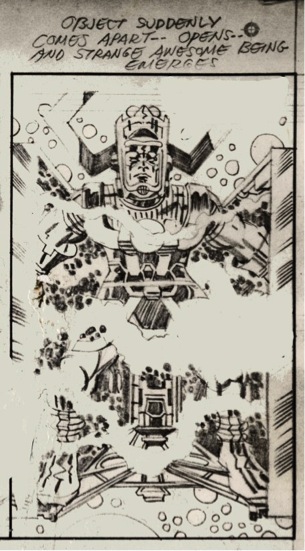 First in a six-part series of posts.

Over at the Jack Kirby Museum website, Museum Director Rand Hoppe announced that he and Museum Trustee Tom Kraft are making full-sized, high-definition scans of Jack’s pencil photocopies. Many of these images have been published before in John Morrow’s The Jack Kirby Collector but these new high-definition images are more like photographs, so they reveal much more subtlety and detail in Kirby’s original penciled artwork. Hoppe has been sharing examples of these scans at the Kirby Museum Facebook page.

One of the first pages that Hoppe posted from the 1960s was a pencil photocopy scan from Thor #162 (March 1969). I thought this page would be a nice springboard to launch into a series titled “Kirby Close-up,” where I’ll pick a single image of Kirby artwork and examine it in detail. Thanks to the Kirby Museum, Rand Hoppe, and Tom Kraft for allowing me to use an HD scan of the Thor 162 page to examine the individual panels in detail — specifically page 17, panel 2: “Galactus Lives!”

Much has already been written about the Kirby/Lee authorship debate so in the spirit of brevity here at HILOBROW I’m not going to rehash the hundreds of arguments you can find on the subject. Instead I’m going to take you on a step-by-step trip through the Kirby/Lee storytelling process — or what Lee called “The Marvel Method” — using this single source document as our foundation.

Before I begin, I encourage you to read Mike Gartland’s series on the Kirby/Lee authorship debate called “A Failure to Communicate.” Gartland examines the source documents themselves — Jack’s original artwork and the margin notes — and he compares what he finds there to the published material.

I also want to acknowledge Kirby’s critics and say that yes, maybe Stan Lee wrote Thor # 162 — maybe Lee gave Kirby a 20-page script; maybe Lee gave Kirby a 10-page synopsis; maybe Lee gave Kirby a 1-paragraph plot; maybe Lee jumped up on his desk and acted out Thor # 162 in its entirety and Kirby memorized it verbatim; maybe Lee phoned Kirby with the story; maybe a UFO transmitted the story to Jack’s brain from Stan’s brain. Ultimately we will never know what happened. All I can do is tell you what I think took place — based on my research, talking to many of Kirby’s associates, talking to several comics historians, and looking at thousands of pieces of Kirby’s original artwork. Although open to any new information, what follows is my take for now.

To start off this series, I’ve taken Thor #162, page 17, and digitally erased the word balloons. 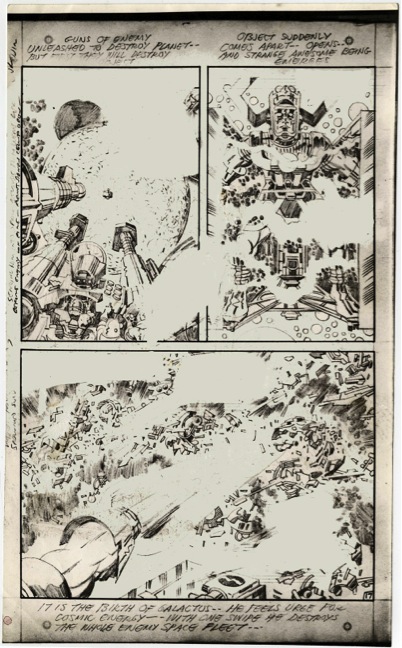 If you can use your imagination to fill in the erased spaces with Kirby art, this is how the page would have looked to Stan Lee in 1969 when he first took a look at it.

Stan and Jack may have worked more closely from 1959–1963, but that’s debatable. From 1964–1970, when Kirby started using margin notes to explain his stories to Lee, every month Kirby sent in about three twenty-page stories (with covers) to the Marvel offices in New York. Let’s think of Kirby as a film director; his penciled pages are storyboards. Imagine each Kirby panel as a cinematic shot, with directions written next to each image. If a typical comic book has about 100 individual images, that means Kirby sent Lee about 300 camera shots with directions every month.

After Lee opened the package and read Kirby’s twenty-page story for the first time, Lee would go back and add captions to the book. When he finished that process, for the bulk of the 1960s, Lee credited himself as the sole “Writer” of these stories. Towards the end of the 1960s, Kirby became so frustrated with this bogus arrangement that he asked for a change; all Lee was willing to do was add a “Produced by” Stan Lee & Jack Kirby credit to Kirby’s work. Lee’s refusal to accurately credit him and compensate him for his writing contributions was one of the pivotal incidents that drove Kirby to leave the company in 1970. To this day, many readers don’t realize the importance and magnitude of Kirby’s contributions to all of his 1960s Marvel Comics stories.

I’ve titled this post (about Thor #162, page 17) “Pure Kirby” because I strongly suspect that Kirby wrote and illustrated this entire story, alone. There’s no evidence that Lee gave Kirby a script for this story; and if he had, Kirby’s margin notes would be superfluous. Why would Kirby tell Lee his own story again in the margins? Surely Lee could refer to his own plot or script.

Therefore, if this book had gotten lost in the mail and arrived at my home today and I was going to publish it, the credit box I would add to the page one splash would read: “Story & Art by Jack Kirby.”

We could endlessly debate whether Lee deserves an “editor” credit or a “plot” credit, but if we are talking about the story in this phase of the process — Phase One, where we have Kirby’s pure pencils and margin notes alone — I think giving Kirby an author and an illustrator credit would be accurate and fair. And I don’t think it would take anything away from Stan Lee’s legend. It would simply set the historical record straight and give some well-deserved credit where it was due and remains due.

Before our next installment, take look at that page of Thor art, reflect on Kirby’s imagery, read Kirby’s directions to Lee, and try and imagine you are Marvel’s Special Guest Editor for March 1969. What captions would you add to Kirby’s story and artwork?