I enjoyed reading the series of “Kirb Your Enthusiasm” articles on HiLobrow where various artists and writers discussed some on their favorite individual panels of Jack Kirby artwork. I, too, like taking a single comic book frame out of context and analyzing it as a stand-alone piece of visual/textual information.

[Earlier this week, the New York Times published an editorial by Brent Staples, which argues that Jack Kirby contributed far more to Marvel than he has received credit for. HiLobrow recently published a series of 25 posts, by 25 authors, each analyzing a single panel from a Jack Kirby-drawn comic book. That series was followed by additional Kirby exegetical commentaries, of which this series of five posts by Rob Steibel is the final instance.]

I’d have a difficult time picking one all-time favorite image by Kirby because the number of individual images Jack produced throughout his career is staggering. Jack illustrated about three pages of artwork every day for his entire 40-plus-year career. That equals approximately 40,000 pages of artwork. If the average comic book page (factoring in covers and splash pages) has about four panels, that means Jack drew maybe about 160,000 individual published images in his lifetime; I wouldn’t be surprised if the number is closer to 200,000.

Most of us have seen a significant amount of the published work Jack did for Marvel Comics during the 1960s — the material has been reprinted extensively, and the original publications are relatively affordable on eBay — but most people have only seen a few pieces of Jack’s original art. I’ve been studying Jack’s work now for a few years, and one of the things I enjoy looking at are scans of the source documents — Jack’s original art. In almost every case, there is information on the pages of Jack’s originals that did not show up in the published comics. Specifically, on all the originals I’ve seen from 1964-1970, Kirby wrote fairly extensive liner-notes in the margins of every single page he illustrated — penciled text explaining to his editor Stan Lee what is taking place in each frame of the story. 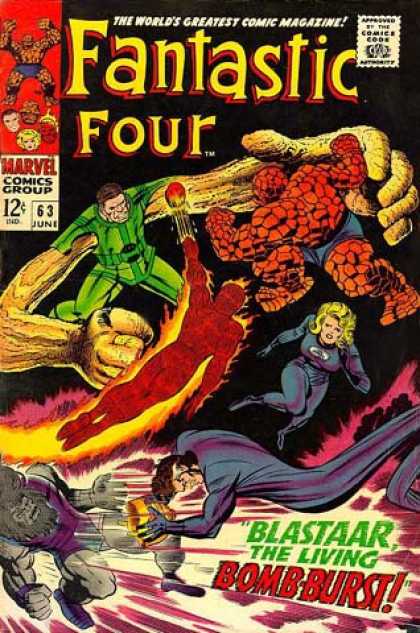 I thought some of you might enjoy looking at a few close-ups from a Kirby original to see some of the “behind-the-scenes” goings-on taking place on a page before it’s published. This series of five posts will take a look at panels from page 3 of Fantastic Four # 63 (June 1967). I’ll show you the original published panels, then scans of each panel from the original artwork. The scan of the entire page of original art from Fantastic Four # 63, page 3, is available at the Heritage Comics Auction website in the archives section.