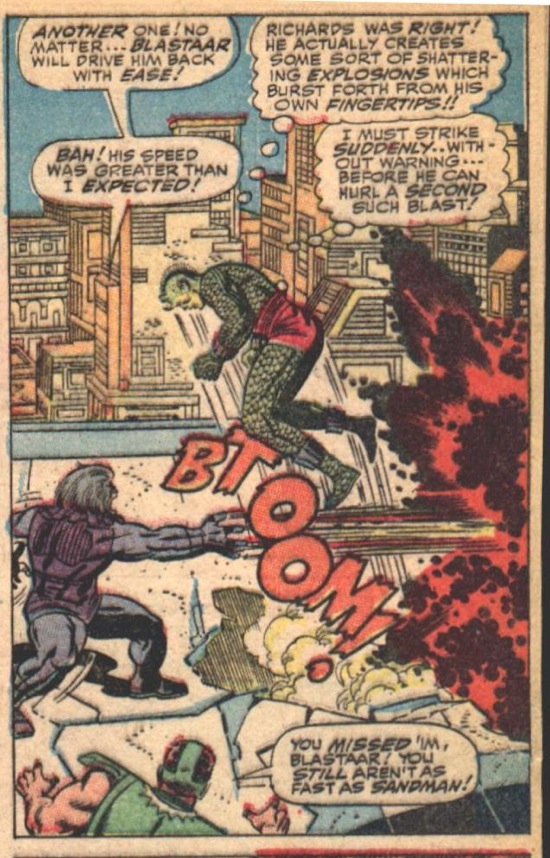 I think Kirby’s directions are fairly simple here because the image is self-explanatory: “He shoots up so fast, Blastaar’s shot misses him.”

Then, in the top left-hand corner, Lee’s production note in the circle says, “Space between the two balloons.” 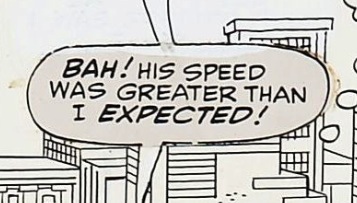 You can see someone made a stat of the original artwork, then pasted the original second dialogue balloon lower on the image. Lee may have felt there was too much blank space above the character Blastaar, and this revision made the image more balanced. Look at how perfect each one of Joe Sinnott’s straight-edge lines are throughout the entire image, but whoever made the change inserted the roof of a building over the second dialogue balloon which is somewhat wavy. Certainly not something a kid reading this comic book would ever notice, but still an interesting glimpse into the step-by-step process taking place.

On the right hand side of the page, Lee wrote a note to a member of his production staff, Sol Brodsky. The note says: “Sol, explosion comes from his fingertips! See pg 15/2.”

If you look closely at the artwork, you can see someone used white-out to obscure the area over and under Blastaar’s arm, probably to get rid of some Kirby/Sinnott crackle or the depiction of an energy blast. Lee writes in the margins in the second circle, “More speed lines,” which you can clearly see were added to the image because they are fairly shaky, once again, much different than Sinnott’s impeccable line-work.

In many respects, none of these little changes make a difference. This is one of my favorite images from the Kirby/Sinnott Fantastic Four series — I love the visual look of the character Blastaar shooting powerful bursts of energy from his fingertips, and the resulting mix of speed lines, Kirby debris, and famous Kirby/Sinnott crackle that visually represents the impact — so it could be argued that Stan Lee’s changes actually help the composition and make the image more powerful. Plus, as editor, Lee is focused on continuity: he wants the characters to behave in a relatively consistent and easily recognizable fashion. So, although the editorial changes seem like nit-picks on one level, I think this panel is a great example of how the Kirby/Lee/Sinnott collaboration worked very well. 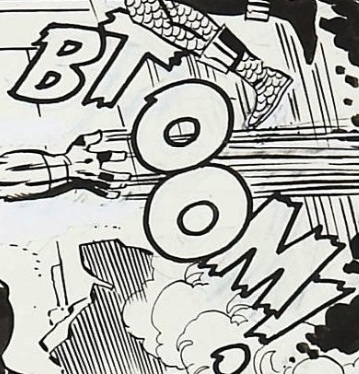 I wonder if Lee was the one who inserted the sound effects. Obviously they were inked by Rosen in this book, and you can see traces of blue-line pencil underneath, so they may all be Stan’s idea. I don’t know about other readers but I never even noticed the sound effects as a kid. I wonder if some readers do actually read that “BTOOM!” text, or it simply serves as a visual element that Lee felt gave the page more of a wallop.