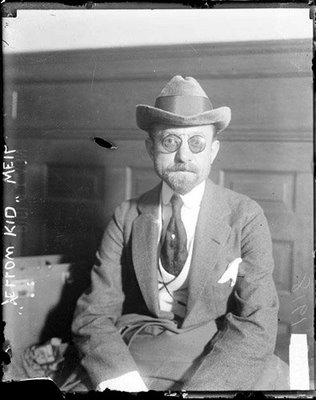 Edison, Ford, and McGyver may be near its top, but the all-time list of ingenious Americans has to start with JOSEPH “YELLOW KID” WEIL (1875–1976), the greatest con man in US history. In a career that spanned more than half a century, Weil sold snake oil and fake silverware to country rubes, scrub land in Texas to rich spinsters, and the concession rights at a Chicago racetrack to a sausage merchant (with much confusion ensuing when two different vendors showed up). He even bought and ran an actual bank, so he could issue and cash in fraudulent letters of credit. You know that elaborate scam in The Sting, where Newman and Redford took a rich guy’s money by setting up a fake betting parlor — complete with fake gamblers? Weil actually did that; you’d be amazed how many schemes in movies or TV shows came from Weil’s playbook. Weil, who looked eminently respectable, could (and did) pretend to be anyone from a physician to a lawyer to a downtrodden office worker who needed your help to get back at his mean boss. He also had a flawless ability to find the type of sucker who can’t resist the promise of getting something for nothing. Astonishingly, for someone living in a world populated by an ever-growing number of his victims, Weil died peacefully, of natural causes, at the age of 100.

On his or her birthday, HiLobrow irregularly pays tribute to one of our high-, low-, no-, or hilobrow heroes. Also born this date: Debbie Harry and James M. Cain.