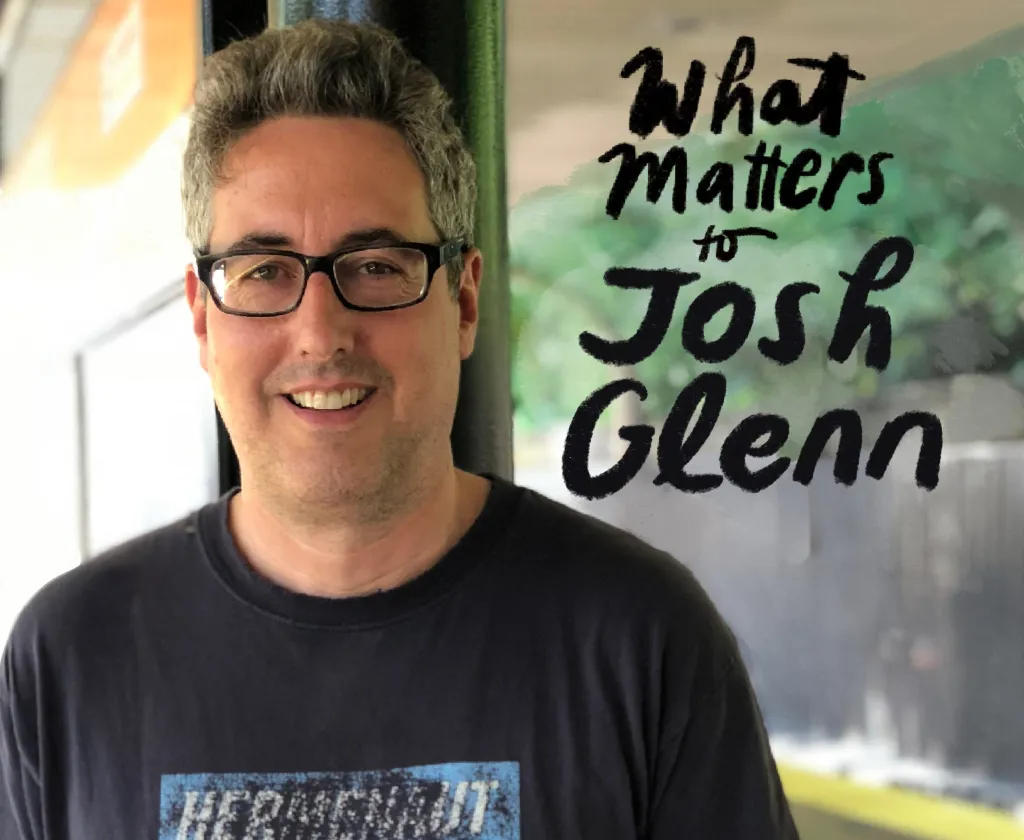 What Matters? is a series of Q&As with creative types, conducted on behalf of PRINT Magazine and Debbie Millman, host of the podcast Design Matters. HILOBROW’s Josh Glenn was interviewed in June 2022.

Joshua Glenn is a consulting semiotician and coauthor/coeditor of, most recently, The Adventurer’s Glossary and Lost Objects. He is editor of HILOBROW.com and the MIT Press’s Radium Age series of reissued proto-sf novels.

PRINT: What is the thing you like doing most in the world?

JOSH: Reading was my favorite activity until my two sons were born; and now that they’ve grown up and moved out of the house, it has become my favorite thing again. But when Sam and Max were under 14 — so for about 16 years of my life — playing with them was my favorite. Which is how I ended up coauthoring three books about family activities — I loved every moment of it.

I’ve always been a fast and voracious reader, though I’m slowing down slightly in middle age. In recent years, I set out to research and read the 1,000 best adventure novels of the twentieth century; I wrapped up this project during the early days of Covid-19. Now I’m trying to decide which science-fiction novels and graphic novels from the past 20 years are my favorites. I also read nonfiction — lately, I’ve been digging into the history of science. I also enjoy writing, though not nearly as much as I enjoy reading. The only reason I’ve ever written a word was because I wanted to read something that, as far as I could ascertain, didn’t exist yet.

The thing I like doing the most when I need to cheer up, though, is tooling around on a bicycle.

PRINT: What is the first memory you have of being creative?

JOSH: Whenever I’d stay with my father, after my parents were divorced, when I was six or so, he’d encourage me to write and draw stories in a large spiral-bound drawing pad. I drew innumerable comics about the exploits of “Super-Josh” — that’s my earliest creative memory, probably. I was an accomplished liar and thief, at a young age, and well into my teens — a hustler. Why do I mention this? One of the driving forces behind my creativity, to this day, is a restless desire to get out of my comfort zone, to spot and seize opportunities, and to see what I can get away with.

PRINT: What is your biggest regret?

JOSH: I used to have regrets, years ago — before I read what’s known as Nietzsche’s “affirmation,” from The Will to Power. “If we affirm one single moment,” he suggests, “we thus affirm not only ourselves but all existence.” If there’s just one thing about your life now that you wouldn’t want to change, then all existence is “good, redeemed, justified, affirmed.” A lovely notion! I’m sorry about shitty ways that I may have treated people, in the past, but otherwise — no regrets.

PRINT: How have you gotten over heartbreak?

JOSH: Writing bad poetry. I’ve only ever written poetry when getting over heartbreak, I think.

PRINT: What makes you cry?

JOSH: I haven’t really sobbed, I think, since I was in elementary school. I remember bawling about something — I think my mother wouldn’t let me walk through a particularly dangerous part of our Boston neighborhood to get to school in the mornings — and then seeing myself from the outside, and thinking, “Let’s not do this ever again.” However, I tear up very easily and all the time — particularly when I see people being kind to one another, and close-minded people becoming more open-minded. I’m such a liberal! So, Netflix’s Queer Eye really has my number.

PRINT: How long does the pride and joy of accomplishing something last for you?

JOSH: In a way, it lasts for years. I will sometimes take a book I’ve written off the shelf and read it from cover to cover. I enjoy gazing at the books, activity kits, and other things I’ve created. However, I’m usually working on several projects at once, so probably I don’t revel in the feeling of having accomplished something as much as I should — I’m on to the next thing.

PRINT: Do you believe in an afterlife, and if so, what does that look like to you?

JOSH: According to my mother, when I was four or five, I asked her what Heaven was like. “Whatever your favorite place is now,” she said, “that’s what Heaven is like.” I said: “Heaven is a library?” I don’t believe in an afterlife, but if I did — yes, I hope that it’ll be a library. With bicycles.

PRINT: What do you hate most about yourself?

JOSH: I’m very aware of my many flaws, but I wouldn’t say that I hate anything about myself. I wish that I could be less self-conscious about things like, say, public speaking or dancing at a party. I wish that I didn’t have such a sharp tongue, and make such cutting (but funny) jokes, sometimes. But that’s not the same thing as hating something about myself. I get along with myself just fine.

PRINT: What do you love most about yourself?

JOSH: I’m pretty thoughtful about friends and family members, and other people about whom I care. I keep them in mind, perhaps not every moment of every day, but certainly throughout the week. I believe in putting in the work to be a good husband, father, son, sibling, friend, uncle, and so forth. I often feel guilty about not being better in all of these roles, but I think I’m doing OK.

PRINT: What is your absolute favorite meal?

JOSH: Bacon, egg, and cheese on an everything bagel.