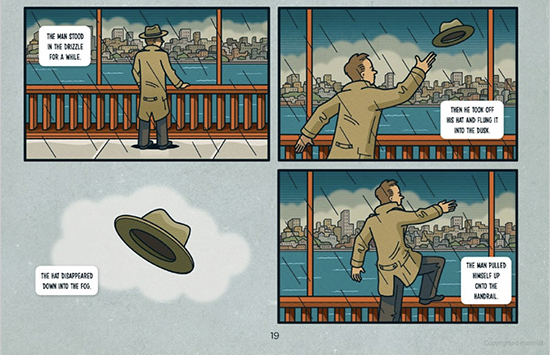 Everything happens for a reason, just not yours. I reread The Bend of Luck right after finishing it the first time, and though I saw many new things, nothing happened differently. We like to think luck is something we can control and wield, or at least guide and out-think, and in this graphic novel by Peter & Maria Hoey from Top Shelf, luck is a literal, physical material — evanescent, rare, but possessable. It’s sought by prospectors and traded by shady brokers, killed for and died over. Coincidental privilege and unearned advantage possess the greedy and come back to haunt the innocent.

Several stories circle around and spiral in on each other, primarily the orbits of a father and son and those they each draw into them. The storyline gradually closes the distance between the estranged pair, as we realize the connection between the dad’s past as a fortune-hunter in what looks like turn-of-the-1900s San Francisco, and the son’s adulthood as a small-business owner in a modern-day metropolis. The father got rich, and the son and his wife end up paying for it in myriad ways. 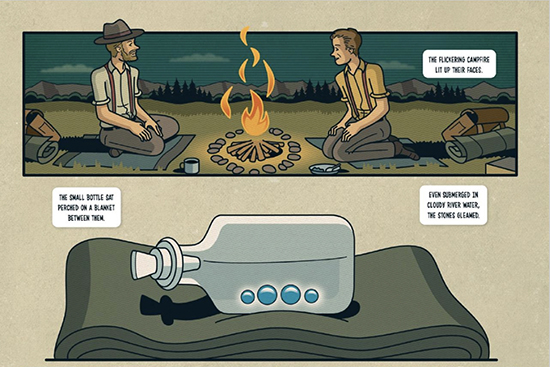 The narrative ratchets between the past and present along various characters’ timelines, revealing what we didn’t know about them, and they don’t know about each other, with each step forward and back. There are also several sequences in which the characters literally get ahead of themselves, immersing us in what we come to realize are scenes of what they anticipate happening, which then wash back to views of how things really turned out. The mythic, air-blue pearls of “luck” are preserved by their frontier discoverers in little globes of resin from pine trees; we long for certain happy moments to be preserved in amber, but what really gets frozen are the long spaces in-between, and the Hoeys counterpoint the story’s geographic and historical sweep with a monumental stillness. 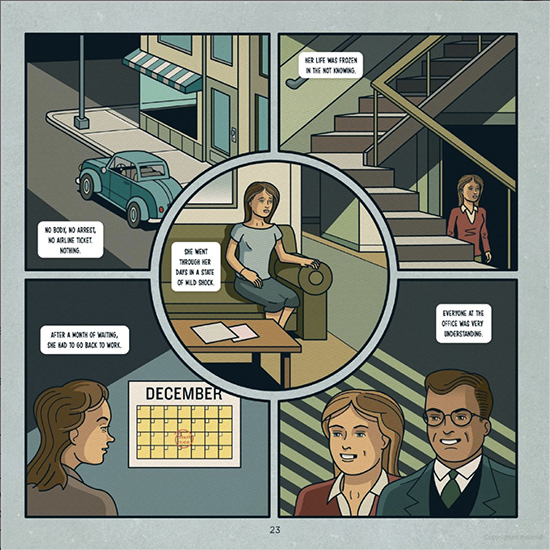 The static rhythms of grief and regret are captured in ways I would have thought as improbable as preserving beads of luck in a bottle, but these creators can do that, both calming moments of drama and charging stretches of melancholy in ways that make The Bend of Luck hypnotic and continually intriguing (the Hoeys are perhaps the only creators in comics who can do what only Michael Haneke can do in film).

This could have been a wilderness adventure or crime thriller, which it sometimes is (and even its long seemingly sedate stretches retain both the tone and aesthetic of a domestic noire), but it is really told as a parable. The elasticity of its period — the father’s past stirs in elements from the Gold Rush to electrified streetcars to gangster movies; the son and daughter-in-law live in a landscape of modern offices, suicide hotlines, Edward Hopper diners and rotary phones — tells us we are in Biblical space, grand antiquity and current signposts condensed to be both momentous and relatable. The pithy narration, packed with meaning and stoic emotional punch, is parsed out like a lectionary; the precise figures and settings could be panes of stained glass. Remarkably (and imperceptibly on my first read), not one character is ever named, all existing as “the woman,” “a man,” “his father,” “the captain,” etc., sinking into our minds at a primal level in the nomenclature of fable. 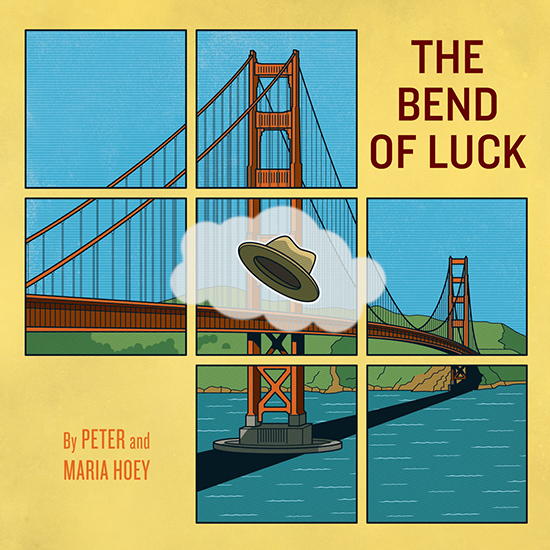 This book began, as Peter Hoey told me, in a completely different short story, about a gambler in old New Orleans whose enchanted lucky hat, stolen in a rigged cardgame from a voodoo queen, is eaten by a passing horse who pulls an ice-wagon around town, then sprouts wings and flies away free. Suffice it to say that two of the characters in The Bend of Luck, while not running free from their everyday surroundings, do seem to break the circles that others’ powerful gravity had caught them in, and as the poem goes, they know the place afresh. The book of our lives is eventually finite; it can be read from end to beginning or in many directions, and we all miss some things the first time. But we don’t have to miss anything twice. 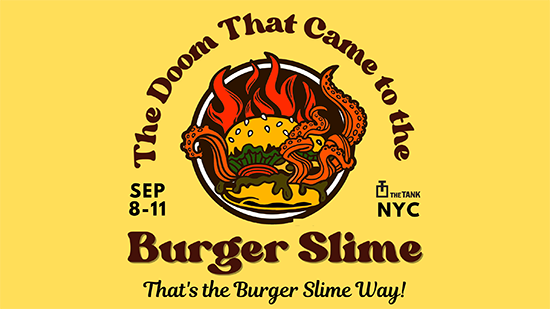 The Doom That Came to the Burger Slime, at The Tank, 312 W 36th St. NYC; closed but memorialized here

A highschooler, a harried low-wage manager, a delusional professor/occultist and a would-be paramilitary badass walk into a burger joint, when a biblical Armageddon makes it iffy to walk back out. It’s the basic bunker drama that reaches back to Romero and The Red Death, repeated as comedy; an end-times narrative that throws together a random family-of-necessity, with all the dysfunctions that come with it. 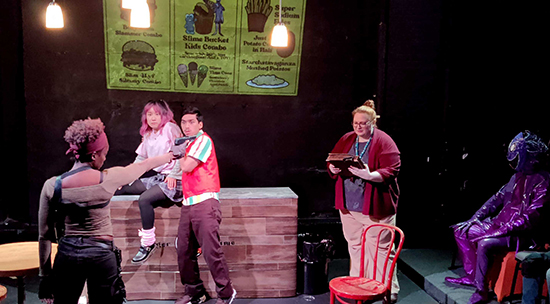 Burger Slime manager Roy, local student Goldie and resident crackpot academic Professor Lemon have all taken refuge in the one structure mysteriously left standing after giant insects start roaming the earth. Unfortunately, the chain’s mascots, Slim and Slam, are not just fun cartoony statues but totems for malign elder-demons meant to battle the insects for control of the smoking slagheap. It’s a reverse garden of eden, a hell of other people, to close out the series finale of humanity; at irregular intervals, motivational video clips of the burger-chain’s CEO flicker into life, an absent god who wasn’t doing too good a job to begin with. Jazz, a heavily-armed survivalist, crashes the party (and through the window) occasionally, offering both the risks and the knowledge of the outside world (literally in the latter case; she was a librarian in the time-before-yesterday). Everyone thinks they know how to handle the end of the earth; Roy and Goldie by holing up, Jazz by shooting her way out, and Prof. Lemon by running the Burger Slime as if it were a micro society with herself as sovereign. All along, Slim and Slam try to sow discord and get released into our dimension by messing with the patrons’ already pretty messy heads. 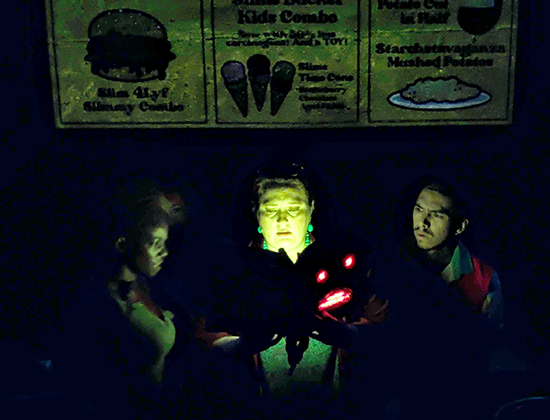 As Roy, Josue Zeus Guerrero radiates goodhearted, demoralized workaday pathos and inspired absurdist physical comedy; as the unflappable and fatalistic Goldie, Cindy Xu is a powerhouse of insistent youthful charm and turbulent secret understanding. Kristin Cantwell’s measured mania as Prof. Lemon is the ideal, explosive mix of laughable tyrannical certainty and desperate genuine concern; Marie Donna Davis as Jazz personifies the awe and silliness of the heroic loner and accidental savior she has hit with perfect pitch; as the Burger Slime leader Craig Anderson is a portrait of pained optimism and ill-fitting authority, flawlessly, frighteningly real. Ivy Hong as Slim and Pete Boisvert as Slam are masters of scary-movie, childhood-nightmare voice distortion and unnerving jerky body-language; anti-mascots making the worst-ever subliminal pitch. Lighting designer Yang Yu’s palette of eerie colors, psychological atmospheres and altered states of being particularly stands out, as does Randall Benichak’s sound design, dominated by the continuous earworm and surprisingly versatile commentary of a looped muzak version of Barry Manilow’s “Mandy,” a reliable signpost of hell. Director Emily Edwards brings a choreographed cohesion to a close-quarters, chaotic scenario while still keeping it startling and spontaneous, a textbook lesson in disciplined intuition that breaks all new rules. It matches well with playwright Bryce Weinert’s macabre slapstick portrait of these pressurized, plausible characters; locked up in there with each other but not bound by any of their assigned tropes. I wouldn’t spend the end of the world in this joint, but it’s proven to be a can’t-miss stop-in on my own road in that direction. 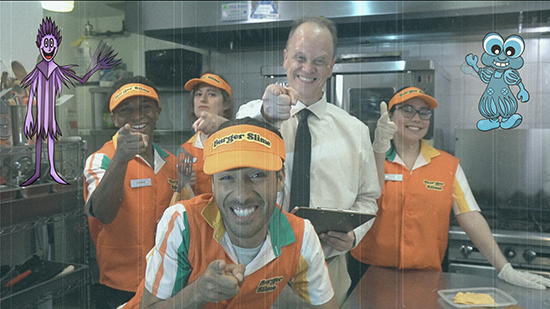